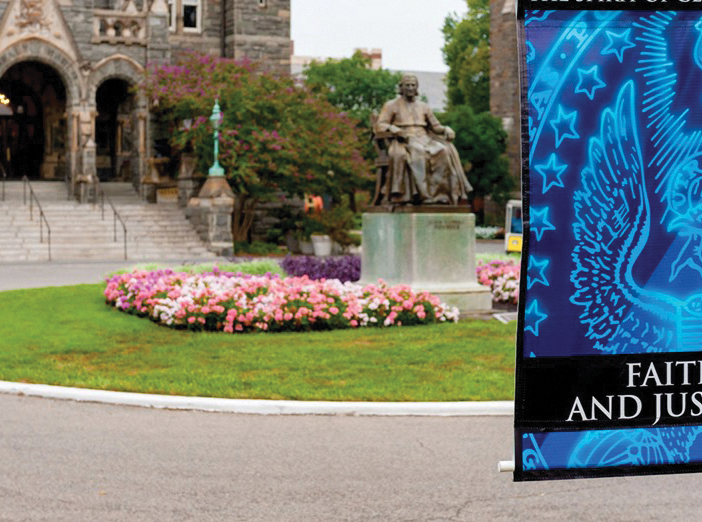 Georgetown University has established a new interdisciplinary institute to address racial injustice and racial inequities within society, fulfilling one of a series of commitments the university made to combating racial inequality in 2016.

The Racial Justice Institute will promote interdisciplinary work on race, equity and action by serving as a hub for research and scholarship across various departments, according to a community-wide email sent Feb. 22. The RJI will be co-led by four faculty members, including Robin Lenhardt (LAW ’04), a legal scholar, Anita Gonzalez, a theatre and performing arts scholar, and Derek Griffith, a medicine, health and society scholar. The fourth scholar, who has yet to be announced, will specialize in public policy. Gonzalez and Griffith are new to the Georgetown community.

One of the main goals of the institute is to reform the systems and institutions within Georgetown that uphold racial inequalities by encouraging scholarship to engage with issues of race, according to Lenhardt.

“While you have got people who are postdocs or who are working in the law school on critical projects or in the medical school, you also have people who are not in any one of those units but who can find a home and opportunity to engage issues of race in completely different ways,” Lenhardt said in a phone interview with the Hoya. “We want to be able to create structured systems to support that work and allow people at every sort of level to engage issues of race.”

Lenhardt, who joined Georgetown University Law Center as a law professor last semester, said the RJI already has several projects in development. These endeavors include creating podcasts and providing a platform for both Georgetown-affiliated and outside experts to share their work, according to Lenhardt.

The establishment of the RJI fulfills University President John J. DeGioia’s (CAS ’79, GRD ’95) four public commitments in 2016 to expand the university’s commitment to racial justice and bring greater attention to the structural racial inequities at Georgetown. Other initiatives include the creation of an African American studies department, which was accomplished in June 2016, adding faculty to support these new institutions and the establishment of the Working Group on Racial Justice.

In its interdisciplinary approach, the RJI will also explore the relationship between art, performance and race. Gonzalez, who currently serves as a professor and an associate dean in the University of Michigan’s School of Music, Theatre and Dance, will co-lead the RJI through her research in the performing and visual arts and serve as a professor in the performing arts department.

The institute will focus some of its research on the impact art and performance have on global communities, according to Gonzalez.

“The institute is going to be working on publishing things. What would it be like publishing a script in Korean and also in English? In Amharic and also in English? And how would that impact communities differently?” Gonzalez said in a Zoom interview with The Hoya. “That’s a broader reach that we hope to do with the institute as well as, of course, influencing policy.”

Performing and visual arts will complement the institute’s work by humanizing political issues, according to Gonzalez.

“The idea of separating the art from daily life has evolved as the way people think about the arts, but it doesn’t have to be that way,” Gonzalez said. “The arts can amplify. They create human beings who are actually involved in the issues that policy is trying to address. You want to know how a policy impacts human beings or environments, so it gives a human face to what are abstract policy issues.”

The institute’s third co-leader, Derek Griffith, will focus his research on the intersection between public health and identity, such as ethnicity and gender. Griffith currently serves as the director of the Center for Research on Men’s Health at Vanderbilt University, where he also teaches. In addition to his role with RJI, Griffith will teach in Georgetown’s Department of Health Systems Administration in the School of Nursing & Health Studies.

Leading the RJI will provide Griffith the opportunity to conduct in-depth research on the impact of diverse ethnic identities on health, according to Griffith.

“A lot of the work that has been done on racial disparities or Black men’s health, which has been sort of my primary area, has treated Black men like they’re kind of all the same, like we’re a monolith. We haven’t really gotten into the fact that, under that umbrella, you have men from the West Indies. You have men from Africa directly. You have men who are of African descent and live in the U.K. and live in other parts of the world,” Griffith said in a Zoom interview with The Hoya. “Having that kind of diversity in my backyard will really, I think, push, enhance and refine the work that I’ve been doing in Black men’s health.”

Studying the intersection between race, ethnicity and gender is critical to understanding trends in Black men’s health, according to Griffith.

“A lot of times with Black people, race and ethnicity are kind of intertwined and synonymous,” Griffith said. “They really do mean different things, so we have to really think hard about how do we break those things down.”

The fourth and final RJI leader, who will focus on the intersection between race and public policy, has yet to be announced. The individual, a faculty member from Georgetown’s McCourt School of Public Policy, will join the other three scholars at an unspecified date.

The institute is ultimately a unique opportunity for the Georgetown community to engage with issues of race in new ways, according to Lenhardt.

“I want to underscore the importance of interdisciplinary work for our campus. I think that because of our structure, which is unusual to have four heads leading an institution like this one, I think of it as not so much as a challenge but as an opportunity,” Lenhardt said. “We could do something that’s really special.”