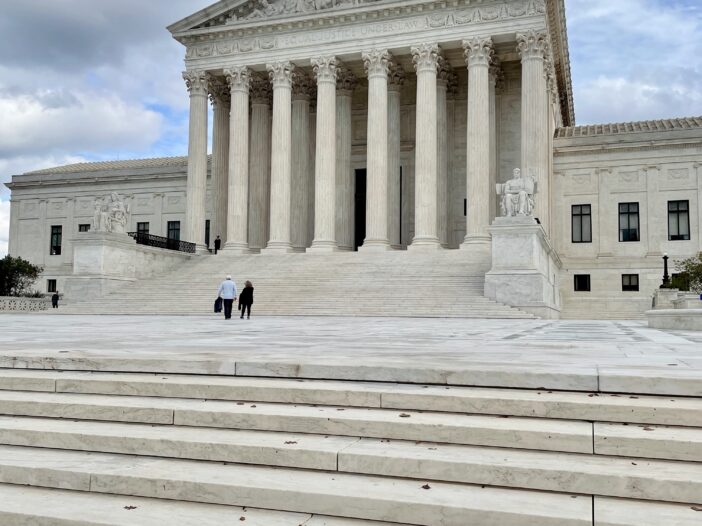 Georgetown University partnered with 56 Catholic colleges and universities to file an amicus curiae brief advocating for the U.S. Supreme Court to uphold affirmative action in admissions in two upcoming cases.

In the brief, which was published Aug. 1, Georgetown partnered with the University of Notre Dame, the College of the Holy Cross and Villanova University among other Catholic institutions asserting the right to consider racial diversity in holistic admissions processes to build diverse student bodies and learning environments. The university led the authorship of the amicus brief after the Court announced it will hear two cases this fall challenging the role of race in college admissions: Students For Fair Admissions, Inc. v. President and Fellows of Harvard University and Students for Fair Admissions, Inc. v. University of North Carolina.

In both cases, the challengers are calling on the Supreme Court to overrule the Grutter v. Bollinger decision, which upheld that the University of Michigan’s race-conscious admissions program for its law school did not unduly harm nonminority applicants. Given the court’s 6-3 conservative majority, the cases could position the court to make major changes to the legal status of affirmative action. Both cases will be heard Oct. 31.

Georgetown has historically supported affirmative action in university admissions; it filed an amicus brief for Grutter v. Bollinger in 2003 and again in 2016 to support admission policies for Fisher v. University of Texas at Austin.

Catholic higher education institutions seek diversity in their student bodies to advance their educational and religious missions, according to the brief.

“Diversity creates a learning environment that furthers the pedagogical goals of Catholic colleges and universities, including rigorous thinking, understanding of and empathy toward people of different backgrounds, concern for the poor and underserved, and leadership in service to others,” the brief reads.

The brief also asserts that the right to consider racial diversity is rooted in the First Amendment’s Free Speech Clause and Free Exercise Clause.

Rosemary Kilkenny (LAW ’87), vice president for diversity, equity, and inclusion and chief diversity officer at Georgetown, said a commitment to fostering a diverse student body is central to Georgetown’s identity as a Catholic university.

“Through our value of community in diversity, Georgetown is committed to creating equitable, inclusive and diverse communities that enhance our learning environments,” Kilkenny told The Hoya. “This is foundational to our commitment to academic excellence and to our identity as a Catholic, Jesuit university.”

“I am proud that Georgetown has taken action on this issue, standing together with more than 50 colleges and universities for affirmative action and the sustained ability to create equitable, inclusive and diverse learning environments for our students,” Okubadejo said in an interview with The Hoya. “This is critical to our Catholic, Jesuit mission, as well as our commitment to diversity, equity and inclusion.”

When asked for comment, a university spokesperson directed The Hoya to a statement about the brief on the university’s website.

“Georgetown, the oldest Catholic and Jesuit university in the nation, was founded on the principle that engagement between people of different faiths, cultures and beliefs promotes intellectual development, an understanding of service and solidarity, and a commitment to the common good,” DeGioia said in the statement.

Kilkenny said creating classrooms that are inclusive and diverse through affirmative action policies prepares students to be better citizens after graduation.

“It also is pivotal to the training of students as future leaders, and engaged citizens,” Kilkenny said. “It’s important for us as Catholic higher education institutions to reinforce together how crucial racially diverse admissions and resulting classrooms are to our continuing missions.”