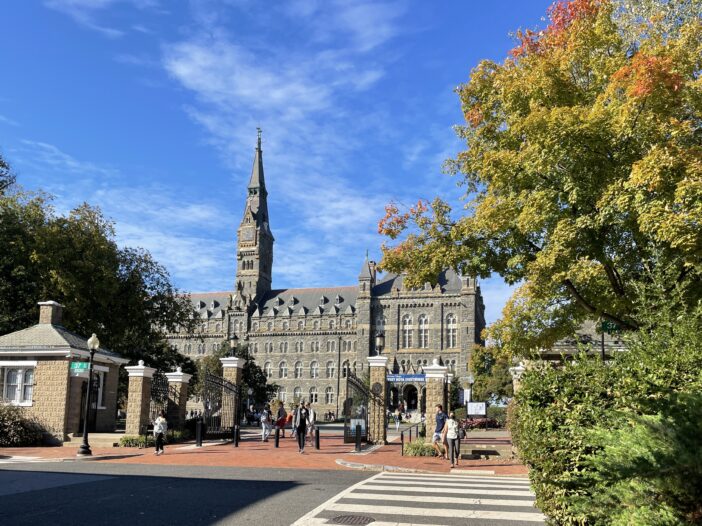 Georgetown undergraduate and law students expressed mixed opinions about the university’s plan to begin the spring semester virtually. These opinions include concerns of safety and uncertainty.

University administrators announced classes will be held virtually through Jan. 30, dining locations will operate on a grab-and-go model and Yates Field House will be closed until Jan. 30. Students will be allowed to move in Jan. 11 as originally scheduled, but may opt to delay their arrival until in-person classes resume.

The announcement comes as the Omicron variant surges through Washington, D.C., and the world, accounting for 95% of new COVID-19 cases in the United States as of Jan. 4, according to models.

The university’s plan does not provide enough protection against the Omicron variant, according to Melsenia Vergin (COL ’24).

“I wish there was more clarity on how we’re going to be protected from the virus even though we’re back on campus and living in such close proximity to one another,” Vergin said in a phone interview with The Hoya. “Honestly, I don’t really feel like it’s enough or it’s adequate in actually protecting anyone or any workers from the virus spreading at all.”

In addition, the uncertainty regarding whether classes will be able to return to an in-person model Jan. 31 poses concerns for students’ housing plans, according to Vergin.

“We don’t know if we’ll be able to come back after that, especially for someone like me — I don’t last minute have the money to figure out where I’m going to be living at and having somewhere to stay,” Vergin said.

The virtual aspect of the plan poses a barrier to students who struggle with online learning, according to Woodall.

“I caught COVID back in November that left me with brain fog and a piercing headache that turned online learning from very difficult to nearly impossible and because of the medium I feel that I’ve lost a step mentally and it’s been very draining and anxiety-filled for me,” Woodall said in a phone interview with The Hoya.

The bill opposing a virtual start to the semester, which was tabled at the meeting, would give students the option to choose their learning plan for the spring, according to Woodall.

The resolution also demands a tuition reimbursement for classes that are held online at any point and suggests the university reimplement the pass/fail option for online classes, similar to the policy implemented for the 2020-21 academic year when the university operated fully remotely.  The bill that opposed the closure of Yate’s and Leo’s failed to pass by one vote, but demanded that students receive a discount for fees paid for those facilities and suggested that students who have federal work study jobs at Yate’s receive compensation for wages they miss.

The university is prepared for the arrival of undergraduate students who plan to move in Jan. 11 and does not plan to offer refunds for students who arrive later in January, according to a university spokesperson.

The Conservative and Libertarian Student Association (CALSA) at Georgetown Law Center sent a letter to the university urging the administration to reinstate in-person classes for the entirety of the spring semester or provide students with a tuition discount if classes are virtual, citing the university’s COVID-19 vaccine and booster mandate, as well as the fact that the Omicron variant appears to be less severe.

The university’s spring plan will disrupt the education of students, according to Luke Bunting (LAW ’22), co-president of CALSA.

“If they’re jeopardizing or compromising the education they’re providing, we just kind of expect a good reason, and so far we haven’t been provided with a good, rational explanation for this,” Bunting said in a phone interview with The Hoya.

The university cited transmission rates, vaccine efficacy, the milder severity of Omicron, hospitalizations and the current projection for the duration of the surge as justifications for beginning the semester virtually, according to a Jan. 5 email sent to campus community members from University President John J. DeGioia (CAS ’79, GRD ’95).

Virtual learning environments create additional challenges for law students, who rely on experiences in the field and relationships with professors for future jobs, according to Bunting.

“I think for a lot of students, and myself included — we have externships, we have other things going on, especially after being virtual for a whole year,” Bunting said. “A lot of people had plans for what they were wanting to do during their 3L or 2L year on campus, and that gets thrown into jeopardy.”

However, according to Finn Thompson (COL ’22), in-person instruction would jeopardize the health and safety of the campus community.

“Although I am disappointed about the current COVID situation, I’m not disappointed by the plan. It’s the right call,” Thompson wrote in an email to The Hoya. “With record numbers of cases at the moment, it wouldn’t be safe for thousands of us to return to in-person classes right now after traveling from around the country.”

Health precautions in the spring plan will keep students safe, according to Thompson.

“I’m glad that the university is allowing people to come back to campus with added precautions in dining halls and campus spaces, and if campus testing remains as widely available as it was last semester, then campus will be safe,” Thompson wrote.

The university will update COVID-19 related public health guidelines as needed, according to the university spokesperson.