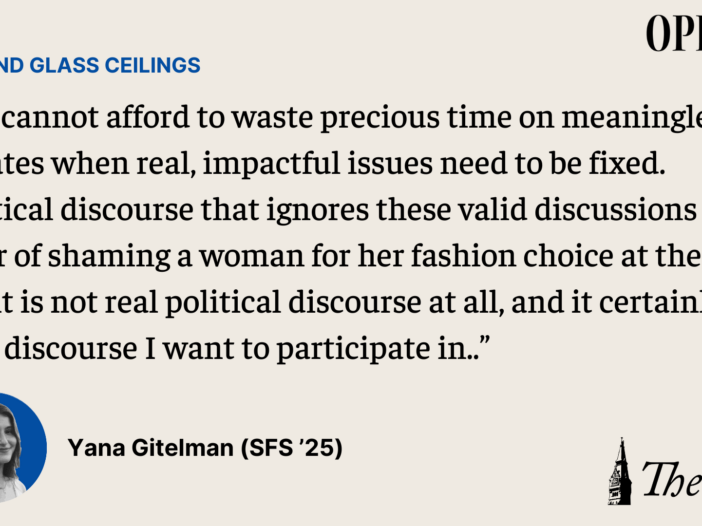 When Rep. Alexandria Ocasio-Cortez (D-N.Y.) attended the Met Gala in a glamorous white gown reading “Tax the Rich” in bold red font across the back, the reactions were swift. Some were pretty brutal and included an onslaught of personal attacks accusing her of hypocritical attention seeking.

As a Type A person, I often find myself sorting things into categories. In terms of the backlash against Ocasio-Cortez’s dress, I saw a few groups: conservatives who oppose taxing the rich, leftists critical of the Met Gala itself, Twitter teens who love the word “hypocrisy” and men who hate women. But as we Georgetown University students love to proclaim in philosophy discussions, there is nuance here. Misogyny prevails across every corner of our national political landscape; it is one of the only true forms of bipartisanship we have. AOC faces sexist “critique” from the left and right alike. This flaw in our discourse does not only hurt female politicians — it limits the depth of our engagement with important policy issues.

In her book, “The End of White Politics,” political analyst and former Hillary Clinton staffer Zerlina Maxwell argues the Democratic Party ought to start paying more attention to more marginalized demographics, in particular Black women, who have been at the fore of progressive activism but receive little to nothing from the party in return. Maxwell cites the phenomenon of bigoted “Bernie Bros.” The 2016 presidential primaries gave legitimacy to a new strain of misogyny: a movement of male Bernie Sanders supporters, often white, straight, cisgender and purporting to be woke, who simultaneously talk down to marginalized people who dare to disagree with them. Maxwell recounts her experiences on Twitter throughout her time on Hillary Clinton’s presidential campaign, receiving constant messages that ranged from condescending to violent, telling her she didn’t know what was good for her.

College-aged white men, with purely theoretical understandings of socioeconomic dynamics, gender, race and class, seem to have the capacity for just as much bigotry as their conservative counterparts who state their hatred more loudly. Leftist misogyny tends to come in a seemingly progressive package, professing to hate women on the grounds of moral purity. In actuality, when much of the same hateful rhetoric is leveled at Hillary Clinton, Sen. Susan Collins (R-Maine) and Ocasio-Cortez, it is evident the critiques are not really rooted in policy or valid concern. Rather, it seems some leftist men are simply waiting around for any female political figure to make a mistake so they can channel their disdain for women in a manner that feels righteous.

The Bernie Bros were especially loud on Twitter, never missing an opportunity to fixate on a woman’s appearance under the guise of class consciousness. Anyone could have predicted Tucker Carlson would spend his show calling Ocasio-Cortez a “dumb,” “annoying” and “vapid rich girl” who wore the dress so people would “stare at her butt.” But male members of leftist online groups — even the “AOC for President 2024” Facebook group — seemed to share a script with Carlson in their reactions to her dress, calling her an “attention whore” who was “claiming victim status” as a member of the wealthy elite.

This year in particular, attendance at the Met Gala was political in more ways than one. While the internet spiraled over Ocasio-Cortez’s dress, Black Lives Matter protesters were brutalized and arrested just outside the Met, right on Fifth Avenue. She stated openly that her dress was meant to spark a conversation, which it undoubtedly did. But she ended up falling into the trap of allowing her dress to distract from the content of her message, even while the violent consequences of the very inequality she seeks to end were demonstrated right outside the event’s gates. In a culture that has more interest in scrutinizing women’s decisions than actually caring about how they affect our fellow citizens, Ocasio-Cortez’s dress will always be the headline of the night.

There was a level of awkwardness in Ocasio-Cortez’s messaging at the Met Gala. However, this critique holds little bearing on the legitimacy of her policies. We should be discussing the wealth tax, universal health care, and canceling student debt — substantive policy questions. We cannot afford to waste precious time on meaningless debates when real, impactful issues need to be fixed. Political discourse that ignores these valid discussions in favor of shaming a woman for her fashion choice at the event is not real political discourse at all, and it certainly isn’t discourse I want to participate in.

Yana Gitelman is a first-year in the School of Foreign Service. Beyond Glass Ceilings is published every other week.