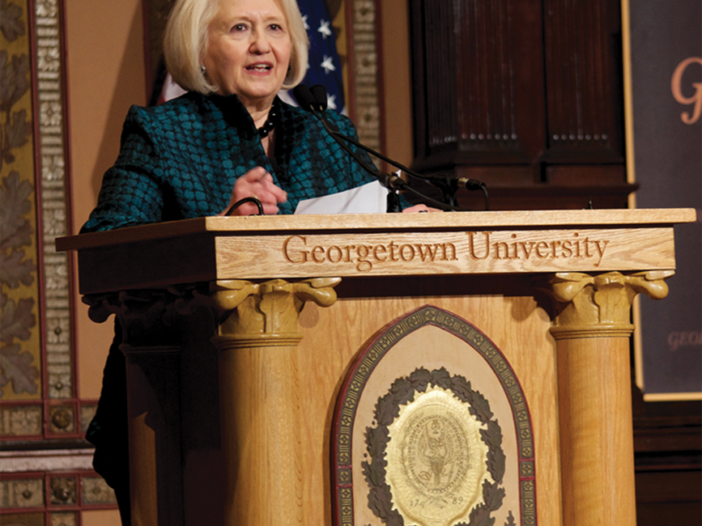 The Georgetown Institute for Women, Peace and Security launched a five-part event series on advancing gender equality, which aims to expand upon and share findings from a GIWPS research report highlighting the key issues facing women currently.

The series kicked off Jan. 28 and will cover ongoing obstacles to achieving international gender equality, with monthly events scheduled throughout the spring 2021 semester. Each topic will address the GIWPS report “Beijing+25: Accelerating Progress for Women and Girls,” which was published September 2020. The report assesses the state of global gender equality 25 years after the adoption of the Beijing Declaration at the Fourth World Conference on Women in 1995. The declaration established objectives for female protection in areas such as education, health and violence. The report found that some issues laid out in the declaration continue to affect women today.

The report and lecture series is not only an opportunity to highlight the mission of the Beijing Declaration and its goal to secure gender equality but also to invoke a new sense of urgency in solving pressing issues, according to GIWPS Executive Director Ambassador Melanne Verveer.

“On the occasion of this anniversary, we wanted to review the progress women and girls had made — and there has been progress — but we still haven’t closed the equality gap,” Verveer wrote in an email to The Hoya. “The report highlights best practices and ways that each of us — wherever we live and whatever we do — can be part of the solution.”

Each event in the series focuses on one of five important key levers for progress for women and girls brought up in the Beijing+25 report, according to Verveer. These five levers are challenging gender stereotypes, bridging gaps between law and practice, countering backlash to gender equality, advancing women’s leadership in politics and peacebuilding, and harnessing technology to advance gender equality.

The first event, titled “Attitude is Everything: Challenging Gender Stereotypes,” focused on the role of gender norms in society and the threat they pose to women while also highlighting successful programs that combat such norms, according to Verveer.

“We spotlighted a program based in Senegal that has been extremely effective in social change, in ending often deeply entrenched practices like child marriage or female genital cutting,” Verveer wrote.

Anisya Fritz, chair of the Georgetown Ambassadors for Women, Peace and Security, was a featured panelist at the event and said it was a success, with views from more than 1,000 people and professors planning to assign the recording in their courses. GIWPS events are attracting a global audience in over 90 countries, according to Fritz.

Highlighting the findings of the report is crucial considering the need for continued research on gender equality to expand women’s rights, according to Jeni Klugman, the lead author of the report.

“Despite major progress over the past 25 years in such important areas as girls’ education, legal reforms and prohibitions against intimate partner violence, there is much much more to do — and especially to expand the rights and opportunities of girls and women living in poverty and marginalized due to race and other sources of discrimination,” Klugman wrote in an email to The Hoya.

While writing the report, Klugman and her team used the U.S. Women, Peace and Security Index to analyze which gender-related issues are most pressing for women in the United States today. Concerns highlighted in the report directly affect members of the Georgetown community, according to Klugman.

“The analysis revealed several important priorities — which cut across disciplines — including legal protections, affordable childcare, and access to sexual and reproductive health,” Klugman wrote. “Some women in the Georgetown communities have faced these barriers and discrimination directly in the lives.”

The series will also examine the effects of the COVID-19 pandemic on gender equality in the upcoming events, according to Verveer.

“A major theme across the events is that Covid-19 has exposed and exacerbated gender inequalities. It’s urgent that gender be a critical component of any relief and recovery efforts in addressing the consequences of COVID,” Verveer wrote.

The next event in the series will take place Feb. 25. Verveer hopes the program will highlight that gender equality is a pressing problem that everyone should be invested in.

“It’s so important to put a spotlight on what’s working to overcome persistent obstacles and barriers. We learn from each other and lessons without borders are important lessons to learn,” Verveer wrote. “I think we are all inspired by people who are making a difference, and we will be putting a spotlight on changemakers and effective programs throughout the series.”