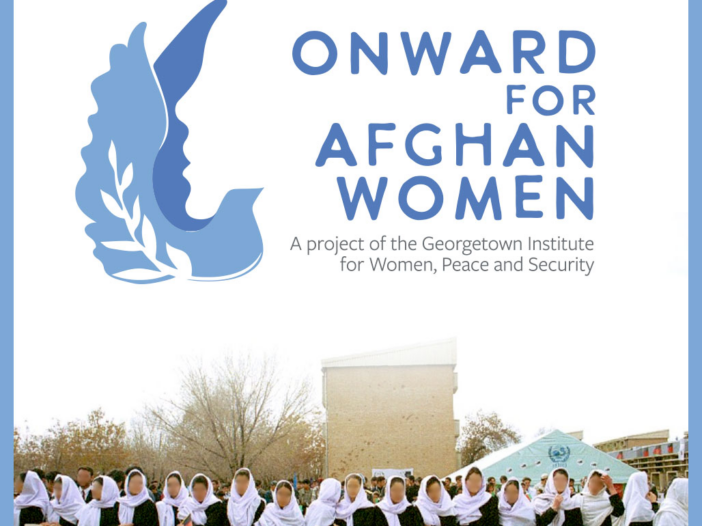 The Onward for Afghan Women Initiative, which is an initiative of the Georgetown Institute for Women, Peace and Security (GIWPS), welcomed two Afghan women refugees into Georgetown’s global human development master’s program.

Salma Alokozai (GRD ’24) and Nasim Azizi (GRD ’24), two of the Afghan women who received help from GIWPS, received the scholarships to study at Georgetown beginning this fall. Alokozi previously worked in the Ministry of Finance in Afghanistan as the director general of macroeconomics and fiscal policy, while Azizi worked in the Women’s Chamber of Commerce and Industry in Herat.

GIWPS, with assistance from governments, companies, organizations, and individuals across the world, helped evacuate over 1,000 Afghan women leaders and their families when Afghanistan’s capital city Kabul was captured by the Taliban after U.S. troops completed their withdrawal from the country in August 2021. The move came just weeks before the scheduled deadline for U.S. troops to withdraw from the country.

Over the past year, GIWPS continued providing support for their resettlement in the United States. In addition, GIWPS has helped provide resettled Afghan women with platforms and connections to advocate for the women and girls who remain in Afghanistan.

“When I received information about the Global Human Development Program (GHDP) scholarship, I decided to apply for it because, in my opinion, when a woman has the opportunity to develop, she can serve the country’s future,” Azizi wrote to The Hoya. “By continuing to study in this field, I want to be a source of service to my fellow human beings.”

Alokozai said studying at Georgetown has been a part of her healing process following the events that occurred in Kabul last year.

“Georgetown and this program, and becoming part of this community helped me a lot to recover from the trauma back at home,” Alokazi told The Hoya. “It gives me purpose at a time where I had to start from scratch.”

After earning her degree in global human development, Alokozai said she aspires to help people and countries find their way towards development.

“What I was witnessing, or realizing as part of my work, made me want to pursue a master’s degree in global human development because I think it plays a crucial role in helping the countries move towards prosperity and economic self-reliance,” Alokozai said. “Also in people’s lives and their welfare.”

“The overall goal is that we need to be seen as capable enough enough to be trusted with big decisions in the country and outside the country without being seen as victims of violence and human rights violation, which is a truth, but that shouldn’t become our weakness, that shouldn’t become something that takes away the courage, the confidence from us,” Alokozai said.

The Taliban implemented a ban on girls’ education once in power. In the past year, around 850,000 Afghan girls have been stopped from attending secondary school. While the Taliban has reallowed education for girls in some areas, these cases are rare and Taliban policy has largely provided obstacles to the pursuit of education for Afghan girls.

According to GIWPS Program Director Allie Smith, Director of Communications and External Affairs Sarah Rutherford and Afghanistan Policy Associate Lina Tori Jan, members of the GIWPS team, it was important to ensure that the Onward for Afghan Women Initiative continued to support Afghan women leaders even after the withdrawal.

“We wanted to ensure that the work didn’t end at evacuation and that these leaders had opportunities to continue their leadership and advocacy, thus Onward for Afghan Women was born,” the GIWPS team wrote to The Hoya. “Our mission is aimed at elevating and equipping Afghan women leaders with opportunities to continue their advocacy on behalf of Afghan women and girls.”

Azizi was also a part of the Women Deliver Young Leaders Class of 2018, which connects young advocates with platforms and resources to amplify their influence, and a 2019 United States Institute of Peace Generation Change Fellow, a program that partners with young leaders globally to strengthen the transformation of their local communities.

Azizi said international organizations like GIWPS are important in pressuring governments into change.

“Afghan girls and women in the current situation need justice for education and work,” Azizi wrote. “Advocates need the support of international organizations such as GIWPS to influence the current government and pressure them on girls’ education.”

Alokozai said she hopes to serve as an example of the power Afghan women can have in the transformation of their communities if given the proper resources and support.

“Just by trying my best to be my best version is one of the goals. I hope to represent Afghan women in the best possible way and tell people that we can do a lot more, if we are given the opportunity,” Alokozai said.