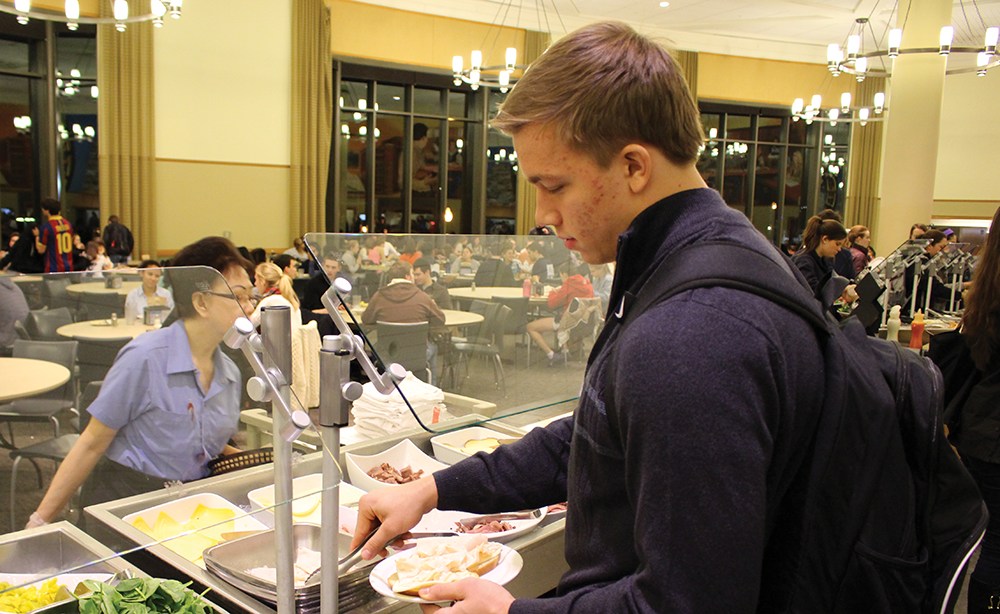 O’Donovan Hall has redoubled its efforts to make its eating options more gluten-free friendly. Although it has expanded its food storage areas and added more meal options, students have yet to see any concrete changes take hold.

“We discussed several ideas regarding gluten-free options in Leo’s, including what the students liked and what they wanted to see more of,” Marco said. “Students had a range of suggestions based on personal preference and group ideas. … We also discussed what they want to see continue in Leo’s, such as gluten-free soup options and some of their favorite items in the gluten-free fridge.”

In response, the Leo’s staff has added a larger fridge in the gluten-free section — it is protected by an access code — a sweet potato bar and a toaster oven. Possible plans include offering gluten-free items in Grab ‘n’ Go, a panini press, pasta options and two cereals. Students welcome these changes since many have experienced sickness from contaminated food in Leo’s before.

“I think the only times I’ve really gotten sick from Leo’s — [although] they’re okay at labelling what actually has gluten in it — is the issue with cross-contamination, and I always get sick when I have peanut butter or stuff like that,” Maribeth Teresczuk (COL ’16) said.

Although students are excited for these reforms, some feel that they are addressing a long-standing problem.

“I think it’s definitely needed, but I think it’s a good thing that they’re doing it because so many people that eat there have celiac like I do,” Joe Lanzilla (SFS ’16) said.

The changes were scheduled to be completed at the beginning of the semester, but Teresczuk said she has not noticed many changes so far.

“We have a gluten-free section, and the fridge last semester was very poorly stocked. It was basically empty all semester,” she said. “So far this semester, it’s been filled with bread at least every day, and it’s nice that you can at least make a sandwich. As for the other things, I haven’t really noticed any other changes.”

Contamination remains a fear despite new accommodations like a corn taco option at the burrito station, a locked bin for dry goods and two gluten-free cereal options that are in the process of implementation.

“I think it is important that they not only make these changes, but make their workers knowledgeable about the changes and knowledgeable about what gluten-free actually means and to take it seriously,” Lanzilla said. “If you ask for gluten-free, they have to make sure because if they make a mistake with that, it could really be bad.”

Many contamination problems arise from the lack of gluten-free only cooking materials.

“Employees are aware of food allergies in the dining hall and take them very seriously,” Marco said. “They also know that they can come to me with any questions regarding this topic.”

Despite continued confusion, gluten-free students appreciate the effort that Leo’s staffers make to accommodate them.

“In general, I think that it’s great that Leo’s is taking the steps to at least be responsive to what they hear from these focus groups and trying to take the necessary steps towards it,” Lanzilla said.