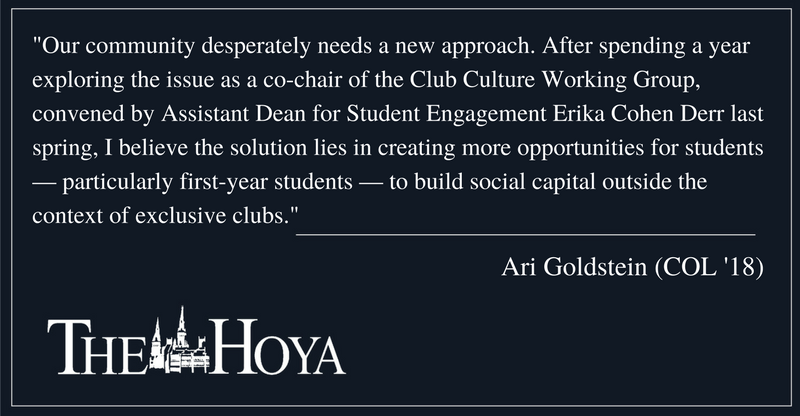 “Club culture” is one of Georgetown University’s most profound social crises — but it is also our most solvable.

Our community has been denouncing club culture since at least 2013, when the student-made film “Sleep When You’re Dead” highlighted the central role of exclusive clubs in Georgetown’s social life and the stress of trying to join them.

In the five years since then, a series of op-eds and editorials in The Hoya has called on us all to “change,” “rethink,” “correct,” “step away from” and “amend” elements of this culture. Even The Huffington Post has called out Georgetown for its “extracurricular epidemic.”

Amid all this attention, however, the issue has been worsening. Students seem more stressed and depressed than ever before, and acceptance rates for Students of Georgetown, Inc., the Georgetown University Alumni and Student Federal Credit Union, the Blue & Gray Tour Guide Society and many pre-professional organizations are several percentage points lower than when I first arrived on the Hilltop four years ago. Blue & Gray’s acceptance rate, for example, dropped to 10.2 percent in fall 2016 from 17.7 percent in fall 2012.

Our community desperately needs a new approach. After spending a year exploring the issue as a co-chair of the Club Culture Working Group, convened by Assistant Dean for Student Engagement Erika Cohen Derr last spring, I believe the solution lies in creating more opportunities for students — particularly first-year students — to build social capital outside the context of exclusive clubs.

Students should be able to make friends and find community in classrooms, in residence halls and elsewhere on campus without having to submit an application to their peers.

The university’s first step in this direction should be establishing new pre-orientation programs for first-year students. Participants in the eight existing programs widely report having built a sense of community through them; I know I certainly did on my pre-orientation backpacking trip. Yet there is far more demand than supply, so many students are denied the opportunity every year.

Creating new pre-orientation programs run by groups like Campus Ministry, Lauinger Library, the Georgetown Entrepreneurship Initiative, and the Department of Performing Arts would give more incoming students the opportunity to build community as they begin their journeys on the Hilltop.

The university should also establish new Living Learning Communities, which, much like pre-orientation programs, are already effective at providing space for students to build community outside of a club context.

Create a Hindu LLC to complement the existing Jewish and Muslim LLCs, and a Chinese language floor alongside the French and Spanish ones. Designate more LLCs specifically for first-year students as well, focused on common intellectual and cultural interests. Doing so would facilitate more friendships in the residence halls, mitigating students’ need to join exclusive clubs.

In addition to the pre-orientation and residential spaces, Georgetown should expand opportunities for community-building in the classroom.

Small seminars can be great places to develop friendships, but more often than not, first-year students find themselves in large, impersonal lectures as they attempt to fulfill core requirements. The SFS and the NHS have universal first-year seminar programs, but similar programs in the College and the MSB are small and exclusive.

There should be a new semesterlong seminar for all first-year students, designed to introduce them to the Georgetown community and impart the skills needed to navigate four years on the Hilltop — and to build community along the way.

The sociology course “Flourishing in College and Community,” which focuses on individual well-being within a campus community, would provide a good model on which to base a universitywide seminar.

Lastly, the university should liberalize its alcohol policies. Whether or not administrators are willing to acknowledge it, alcohol will always play a significant role in college social life; according to the National Institutes of Health, almost 60 percent of college students drank it in the last month.

At Georgetown, a lack of open social spaces and restrictive party policies make it far easier to drink alcohol at social events hosted by clubs than elsewhere. Alcohol is thus a primary reason why so many first-year students seek out clubs and why so many older students stay in them.

If there were school-sponsored social events at which alcohol was served to students of age, and if spaces like the Leavey Esplanade were transformed into open social spaces, then clubs would become much less important to the process of building and retaining social capital at Georgetown.

These ideas matter because the toxic social hierarchy of club culture is a direct affront to Georgetown’s Jesuit identity, which emphasizes “care for the whole person.” Our shared values give us a collective obligation either to take these steps or find other ways to fix club culture.

We should keep our eyes on the prize: creating more opportunities for students to build social capital outside the context of exclusive clubs.

Ari Goldstein is a senior in the College and a leader of a working group on club culture that has hosted events and discussion groups over the past year.