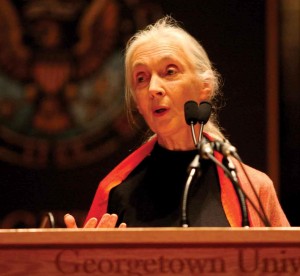 Drawing a crowd of hundreds, British naturalist Jane Goodall spoke in Gaston Hall on Wednesday about the importance of hope in dealing with endangered species and the natural world. Her focus ranged from the beginnings of her research in Africa to her study of chimpanzees.

“I’ve been in the position . of being a historian to record the history of these amazing beings who cannot record their own history – at least as far as we know, they can’t,” Goodall said.

Goodall, who is a United Nations Messenger of Peace and the founder of the Jane Goodall Institute, also spoke about human impact on the environment.

“Given that we humans are without question the most intellectually superior being that has ever walked the planet – we and perhaps some of our hominid ancestors – how come we’re destroying this planet?” she said.

Goodall stressed the importance of youth in changing humans’ relationship with the natural world. She described [her institute’s Roots and Shoots program](https://www.rootsandshoots.org/), which organizes youth-driven groups to develop projects to help people, animals and the environment. A giant peace dove created from recycled sheets by a Roots and Shoots member for the United Nations’ International Day of Peace was displayed on stage by young children during part of the speech.

The audience also included many young people, from students at Georgetown to elementary school-age children, some of whom clung to stuffed animal chimpanzees. Several of the students who came to hear Dr. Goodall speak had known her name for most of their lives.

“It’s her name in kids’ books,” said Catie Profaci (COL ’12), who stood in line for an hour and a half to hear Goodall speak. “I’ve read about her since I was little.”

Other students knew about Goodall’s work with chimpanzees.

“Chimps have been my favorite animal [since I was young],” Megan Oblaczynski (COL ’12) said. “I’ve known her name since I was little.”

Dr. Goodall concluded the evening by answering questions and signing copies of her latest book, “Hope for Animals and Their World: How Endangered Species are Being Rescued from the Brink.”