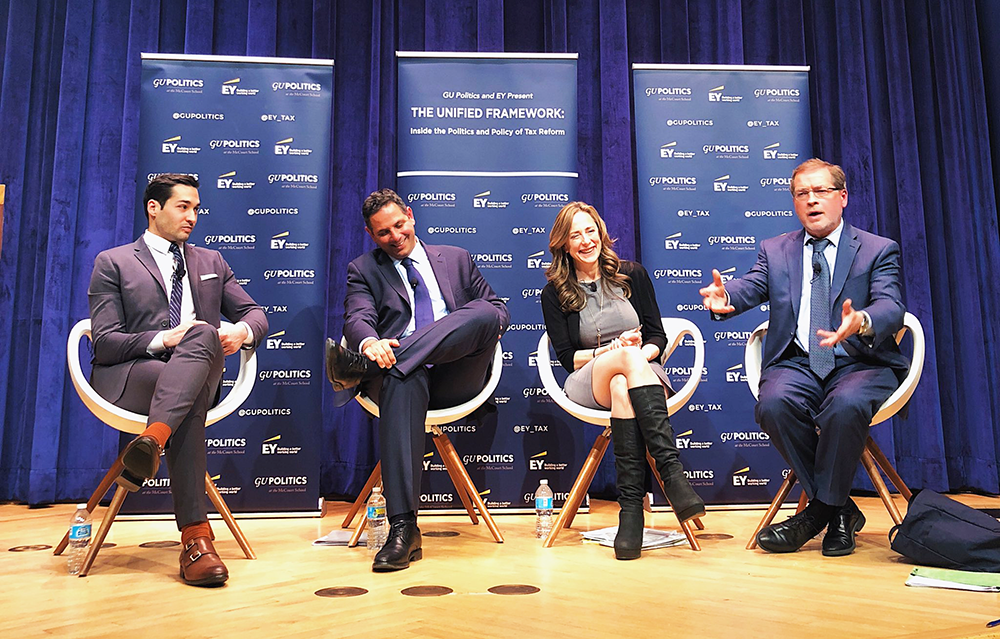 Sayegh and Norquist, both GU Politics fellows during spring 2017, addressed not only the difficulties of passing a tax reform bill in Congress but also their views on the current status of the tax reform plan. They emphasized the political opportunities and challenges of tax cuts and tax reforms.

Sayegh said that analysis of the plan’s overall effect on Americans must take into account President Donald Trump’s goals for economic growth.

“We would love to make the entire package permanent, and there was sincere interest in making the middle-class taxes better. We need to make people understand that we have expanded the zero-tax bracket for the vast majority of the people, those who need it the most,” Sayegh said.

This conversation on tax reform came three weeks after Republicans in the U.S. Senate released their own version of the House of Representatives’ initial tax plan. Currently, the Senate plan cuts taxes on all seven tax brackets and raises after-tax incomes for all income groups in the short run, though tax benefits for lower-class and middle-class Americans would expire after 2025.

The plan, one of Trump’s major legislative efforts, also repeals local and state deductions, personal exemptions for family dependents and the Affordable Care Act’s mandate for Americans to purchase health insurance while cutting the corporate tax rate from 35 percent to 20 percent in 2019, according to ABC News.

The Congressional Budget Office estimates that the Senate plan would add $1.4 trillion to the annual deficit over the next ten years, which is less than the House’s plan, which would add $1.7 trillion over the same period.

“Our corporate rate is way higher than any other industrialized country’s and has the wrong incentives,” Koch said.

Norquist said that an increase in employment similar to the trend under President Ronald Reagan’s administration would have a positive impact on the economy. The unemployment rate fell to 5.4 percent from 7.5 percent during Reagan’s term, due to significant economic growth and his tax cuts.

“We have 8 percent of unemployment if you count those who used to want to work but are or have been discouraged,” Norquist said. “The biggest winners in a percentage basis are those who get their jobs back and who come back into the labor force. I think it would be helpful to point out that the world is not yet perfect.”

The panelists agreed that they wanted to remain as optimistic as possible about the futures of tax reform and the national unemployment rate but conceded that there remains more work to be done.

“Where we are now is the worst possible place for 30-something million households. People say we are overestimating, but I am afraid that they won’t go over [this number].” Norquist said. “We’re going to see capital flows from around the globe at rates we haven’t seen because of the changes in capital reform.”