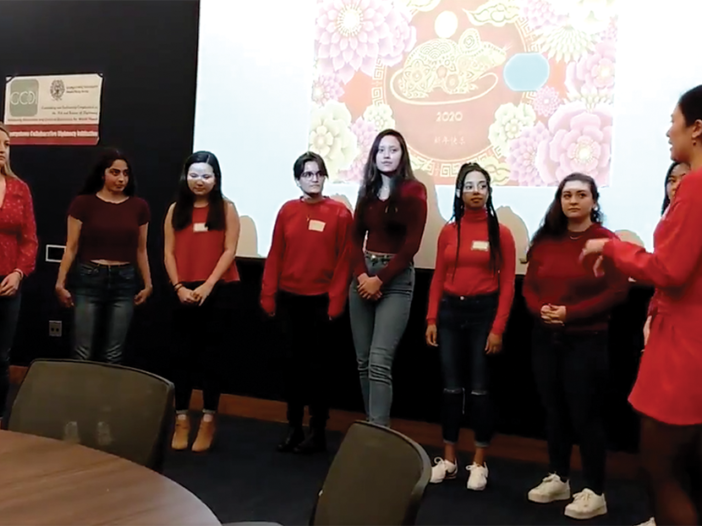 GCDI, a graduate student organization funded by the School of Foreign Service, seeks to educate Georgetown University students about the factors influencing diplomacy, facilitate experiences with practitioners and seek new solutions to diplomatic problems. The event was celebrated a day before the 2020 Chinese New Year, also called Lunar New Year, an observance of the start of the new year in a lunar calendar.

The event, which took place in the Healey Family Student Center Social Room, sold out with over 130 guests in attendance, according to second-year Masters student in the School of Nursing and Health Studies and President of GCDI Heerak Kim. GCDI and co-sponsors organized the event to promote intercultural engagement by embracing Chinese and other global cultures, according to Kim.

“The purpose of Chinese New Year Celebration is to practice cultural diplomacy by wanting people who are not Chinese to come and meet Chinese individuals who are students at Georgetown so that we have cultural exchange and creation of mutual understanding, which is the bedrock of cultural diplomacy,” Kim said.

The UCLA Network of Washington, D.C. and the University of California, Berkeley, Association of Washington, D.C.. were co-sponsors of the event. Both organizations offer opportunities and resources within the private sector, academia, civil society and cultural and religious institutions alongside traditional diplomatic organizations in D.C. for alumni and current students.

The event gave attendees the opportunity to learn about Chinese students’ experiences celebrating Chinese New Year in China, according to Greg Cooper, an attendee who heard about the event from the UCLA Alumni Association.

“People were really friendly, the food was really good, and I heard some great singing,” Cooper said in an interview with The Hoya. “I learned, at my table there were a couple of students from China, so I learned about their traditions, and how they would celebrate with their family back in their hometown.”

The event featured performances by two Georgetown acapella groups, Georgetown Superfood and the Georgetown GraceNotes, as well as a blessing from Fr. Christian Wagner, S.J., a member of the Georgetown Jesuit community who has done mission work in Taiwan and mainland China, and a speech from Maryland’s 2nd District Republican Candidate Genevieve Morris.

The performances at the event by Superfood and the GraceNotes show how Chinese New Year is a celebration that can be appreciated by all, not just those with Chinese heritage, according to Kim.

“We brought Superfood and GraceNotes because cultural exchange goes both ways,” Kim said. “Having the two music groups allows the opportunity for global celebration of Chinese New Year as something that is not confined to the Chinese people, or Asian people, but that it is an international celebration, and an important one.”

“I was not expecting them to sing in Chinese, but that was unique, and in my experience I don’t know of any other schools that have the acapella groups singing in a different language so that was impressive,” Lee said in an interview with The Hoya.

The celebration represented an important step for the Georgetown community toward intercultural appreciation and understanding.

“I think that this celebration is great, we have over 130 people attending today to celebrate Chinese New Year,” Kim said. “I think this is a monumentally important event for Georgetown University in terms of cultural understanding, cultural diplomacy, and/or encouraging understanding of Chinese culture, Chinese history and Chinese people.”