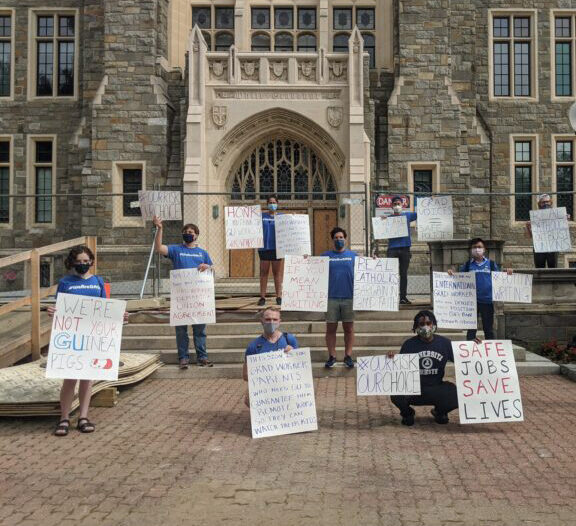 Georgetown University formally denied the Georgetown Alliance of Graduate Employees’ grievance motion Oct. 8, setting up an arbitration process set to play out in the coming months.

Under the arbitration process, both sides will present cases to a third-party arbitrator who will ultimately deliver a binding ruling for both the parties.

The graduate student union has requested an expedited arbitration process, which can typically take months, with the hope it will yield a decision as early as this December, according to Jewel Tomasula (GRD ’22), GAGE president.

“We have requested expedited arbitration, documents only procedure, and suggested using an emergency arbitrator assigned by the American Arbitration Association,” Tomasula wrote in an email to The Hoya. “We hope the University will reply promptly and cooperate with this, if they do then we expect to file for expedited arbitration by the end of October and have a decision from the arbitrator by December.”

Under an expedited arbitration process, both parties can only submit documents to support their case, as opposed to making oral arguments or using testimonials from students, members of GAGE or administrators.

While both parties have now formally moved to arbitration, many specifics of the process are still being coordinated between representatives for both the university and the graduate student union, including whether or not the arbitration process will be expedited.

Even as the particulars behind the legal process are developing, Georgetown maintains they have already addressed GAGE’s ongoing concerns, according to a university spokesperson.

“The collective bargaining agreement, ratified on May 8 after 13 months of collective bargaining and in the midst of the COVID-19 pandemic, includes carefully negotiated provisions around medical leave, as well as other issues brought forth by GAGE-AFT,” a university spokesperson wrote in an email to The Hoya. “The University is committed to honoring all of these provisions.”

Despite the administration’s belief that it has addressed GAGE’s concerns already, the university has seemed open to expedited arbitration, leading to hope for a quick resolution to the ongoing contractual dispute, according to Tomasula.

“In our Sept 17 meeting, we heard clearly from the Administration that they would be agreeable to expedited, documents only arbitration and we hope that we are currently only working through a procedural hurdle towards finally resolving this contract dispute,” Tomasula wrote.

While it prepares for arbitration, GAGE has reinvigorated its advocacy efforts. The union circulated an open letter Sept. 18 to garner support from graduate students and organizations for GAGE’s rights in the arbitration process. The Georgetown University Student Association Senate passed a resolution Oct. 4 to sign on to the letter and formally support the graduate student union’s demands in the arbitration process.

As arbitration materializes, GAGE is prepared to continue their advocacy efforts as long as necessary, according to GAGE member Jeremy Canfield (COL ’19, GRD ’24).

“We have penned an open letter to give our members and comrades the chance to support our move for arbitration and our fight to defend our union rights and contract. Since posting the open letter, we’ve reached 100 signatures and have the endorsement of several organizations, including GUSA,” Canfield wrote in an email to The Hoya. “We are prepared for this fight to go the distance, and this letter makes it clear that we have broad support from the community.”