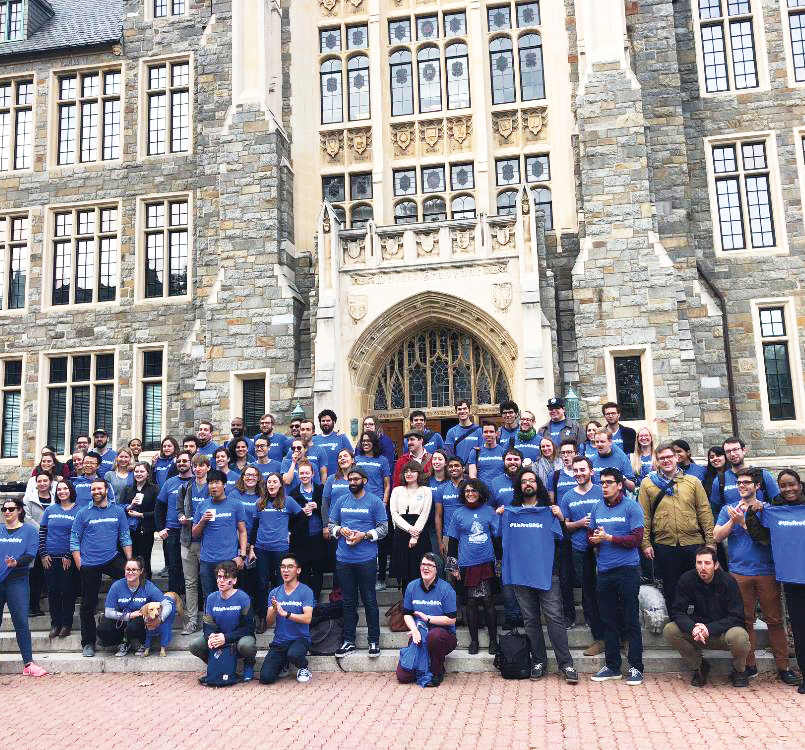 Graduate students demanded recognition of their labor union and the start of contract negotiations in a letter to University President John J. DeGioia on Wednesday.

Around 60 members of the Georgetown Alliance of Graduate Employees gathered on Copley Lawn to deliver the letter to DeGioia requesting greater representation in negotiating a new contract.

The letter calls for a formal response from the university by next Wednesday. Rachel Pugh, senior director for strategic communications, said the university is “carefully reviewing their request.

GAGE seeks to “ensure a work environment that lives up to Georgetown’s values as a Catholic and Jesuit university,” according to the letter. GAGE asks Georgetown to uphold its Just Employment Policy, which was adopted in 2005 “to respect the rights of employees to vote for or against union representation without intimidation, unjust pressure, undue delay or hindrance.”

The American Federation of Teachers, an education-focused union that is also affiliated with the University of Vermont and the University of Chicago, has been designated as the labor advocacy group’s bargaining agent.
GAGE members have been working on a proposal to unionize for the past year. In that time, it has garnered support from over 50 percent of graduate workers, constituting about 800 graduate students in the bargaining unit, according to GAGE member Hailey Huget, a sixth-year doctoral student.
A group of doctoral students began exploring the option of forming a union to negotiate better work contracts for graduate students serving as teaching assistants and research assistants after an Aug. 23 ruling by the National Labor Relations Board, which enabled student assistants to unionize and collectively bargain.
The NLRB ruled in August that teaching and research assistants at private universities are employees with the right to unionize. The NLRB ruling did not cover undergraduate TAs and research assistants.
The bargaining unit includes graduate students who work as teaching assistants, research assistants and teaching associates from doctoral and masters programs as well as the Georgetown University Medical School.
The year-long process has included research, petitions and conversations between members of GAGE and graduate student workers to determine what workers need from the university, Huget said.
GAGE has also garnered support from undergraduate student groups on campus, including workers’ rights group Georgetown Solidarity Committee and pro-abortion rights group H*yas for Choice.
“We are proud to stand in solidarity with GAGE as they work to ensure better living and working conditions for graduate workers across departments and disciplines, and we call on President DeGioia to recognize the graduate worker union and begin collectively bargaining with them,” H*yas for Choice wrote in a statement released on their Facebook page on Nov. 1.
Huget, who became involved with GAGE when it launched in 2016, said the organization seeks to give graduate students fair representation in university dealings that affect them.
“The main thing that we want is for grads to have a voice in decisions that the university makes about our pay, benefits, and working conditions,” Huget wrote in an email to The Hoya. “Perhaps not surprisingly, when grads have a seat at the table, their pay, benefits and working conditions tend to be better and more stable.”
The letter also commends Georgetown’s policy record thus far, particularly in light of the recent policies put forth by President Donald Trump’s administration including changes to the makeup of the National Labor Relations Board that would hinder student workers’ ability to unionize.
“We celebrate Georgetown’s resistance to the unjust policies of this administration, and we trust that this institution will not betray its moral courage by using the NLRB changes to harm working members of our community,” the letter read.
Third-year doctoral student Deidre Nelms said she shares this sentiment, saying changes to federal protections require the university to improve protections.
“That’s especially important now given that federal protections for workers in general are starting to decrease, like Title IX protections are in jeopardy, the EPA is in jeopardy. The fewer federal protections we have, the more local protections we need,” Nelms said.