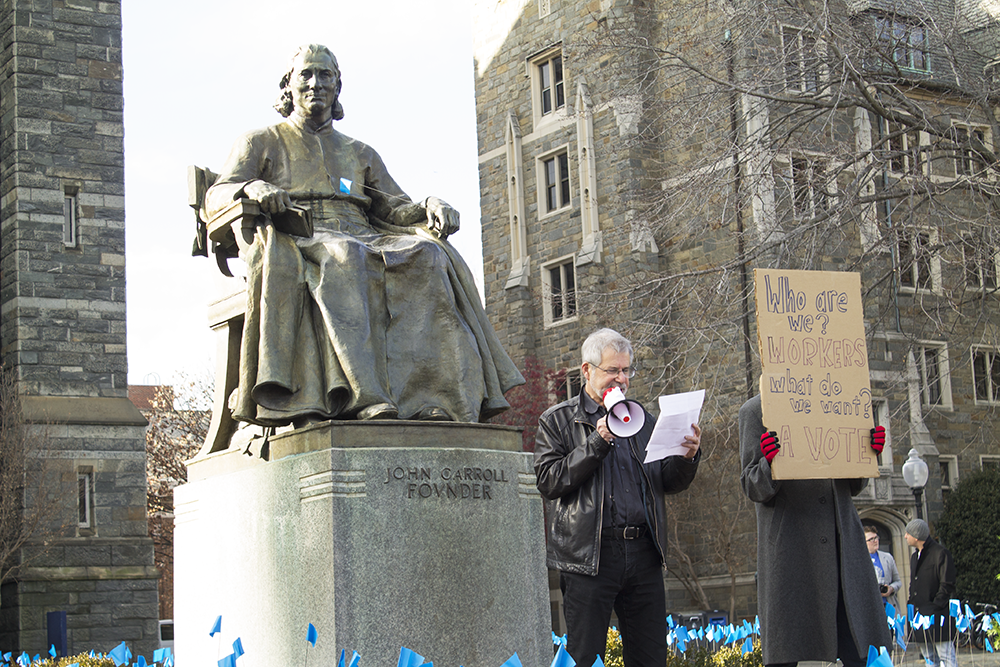 Students pursuing university recognition of a graduate teaching assistant labor union will continue activism to persuade administrators to accept their proposal for the right to vote following a university email announcing new willingness to reexamine the issue of unionization.

In a Jan. 9 email, Provost Robert Groves and Executive Vice President for Health Sciences Edward Healton amended a Dec. 4 decision not to recognize a unionizing proposal from the Georgetown Alliance of Graduate Employees, a graduate student group working with the American Federation of Teachers, to create a labor union. Groves and Healton wrote that the university would consider GAGE’s proposal to work with “a neutral third party rather than the NLRB.”

GAGE plans to continue their efforts to unionize by organizing with the National Labor Relations Board or American Arbitration Association, groups that take action to safeguard employees’ right to organize and to decide whether to have unions serve as their bargaining representative with their employer. GAGE members will accomplish this by administering elections in order to comply with the university’s request that all unions have a legal vote about whether or not they want union representation.

The Office of the Provost declined to recognize GAGE’s proposal, setting back a nearly yearlong effort by graduate teaching assistants to establish a union, after saying the university regards its relationship with graduate student teaching assistants as that of an educational institution and its studentsnot of an employer and its employees, protected by its Just Employment Policy.

This new announcement also comes after the Dec. 7 resignation of seven of the eleven committee members of the Advisory Committee on Business Practices, a group of students, professors and administrators formed by President DeGioia in 2004 to address labor compensation and other workplace issues at Georgetown.

Members of the ACBP resigned after unanimously passing a resolution urging the university to recognize the rights of graduate students to unionize during a meeting with the Provost and other senior administrators Dec. 7.

“Instead of raising this issue with the standing university committee created by President DeGioia specifically to consider labor issues on campus and to advise on the implementation of the JEP, the university opted for a rushed, unilateral, and poorly considered decision-making process,” members of the ACBP wrote in their letter of resignation.

While this language was repeated in the Jan. 9 letter, Groves and Healton expressed the university’s willingness to reconsider GAGE’s proposal.

“Georgetown is seriously considering this proposal to determine whether it might provide an opportunity for a framework that recognizes that our graduate students’ relationship with the University is fundamentally an educational one, while also responding to some graduate students’ desire to have a stronger voice in our continuing work to create the conditions under which they can flourish,” Groves and Hearst wrote.

According to the letter, this decision was reached in part due to GAGE’s willingness to enter into an agreement for an election that would be administered by a neutral third party rather than the NLRB.

Former members of the ACBP said failing to recognize graduate students’ rights to unionize flouts Georgetown values and national labor law. The NLRB has issued varied rulings over the past four decades on whether graduate students in certain teaching and research positions at private universities are eligible for unionization. The National Labor Relations Board ruled in 2016 the graduate assistants are employees.

“To uphold current labor law, our values, and our institutional integrity, the university should recognize the rights of graduate assistants to hold a union election. By refusing to recognize these rights, the university is abandoning its principles and its past practice of recognizing the rights of workers to choose a representative for collective bargaining,” former ACPB members wrote in their resolution.

Obed Ventura (SFS ’19), one of the members of ACBP who resigned in December, has cast doubt that the university’s recent response reflects its genuine intentions.

“They are blatantly violating a ruling, in my opinion, in order to wait until Trump’s appointments to the [National Labor Relations Board] have a chance to reverse their previous ruling,” Ventura wrote in an email to The Hoya.

Deidre Nelms, a third-year doctoral student and a member of GAGE, said the efforts conducted by members of GAGE, including a letter written and signed by 50 faculty members, planting flags in Healy circle and the resignation of members of the ACBP all contributed to the change in the University’s policy towards graduate student unionization.

“The university has since changed its stance, as a result of public pressure and graduate organizing,” Nelms wrote in an email to The Hoya.

Ventura said he hopes the resignation of the majority of ACBP members will push the university to listen to the demands of students and committees before students must resort to more extreme actions like sit-ins and resignations.

“I hope they realize they cannot just establish committees and then not go to them because they don’t like the advice we will give them,” Ventura wrote in an email to the Hoya.

Groves and Healton said the administration is willing to work with GAGE to improve graduate student resources.

“We want to continue working with graduate students, including all of you, to determine how best to enhance the resources offered to students. We will continue, for example, to increase stipends and to work with students on ideas for enhancing graduate-student health insurance, working with outside experts to develop specific options for consideration,” they wrote in a letter to GAGE members December 4.