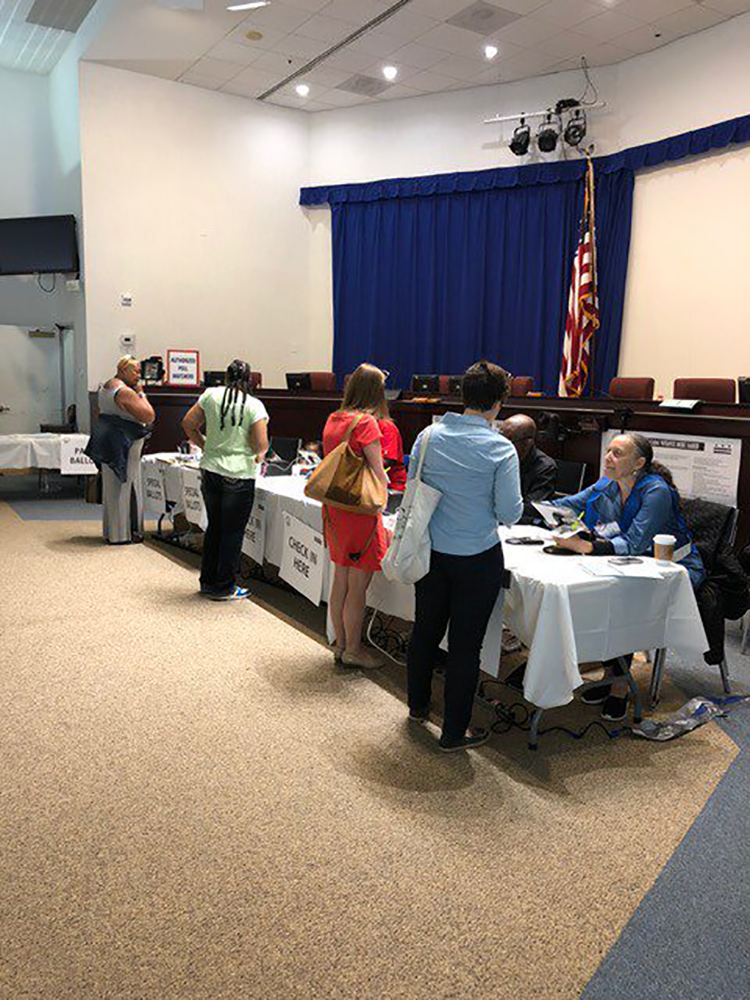 Observe D.C. will send volunteer “observers” to 83 of the 143 polling locations throughout the District to create a random sample that will be representative of the district as a whole, according to Mindes. These observers will give reports of any irregularities, imperfections or abnormalities at polling sites, and report their findings to a call center based in the Ethics Lab in Healy Hall.

“The idea is to build confidence in elections,” Mindes said. “We provide a level of independent oversight the D.C. BOE [Board of Elections] can’t because they’re the ones administering the election.”

The effort will provide the first independent analysis of how elections are run in the District and offer citizens a way of engaging the election process that isn’t phone-banking, Mindes said.

The initiative will primarily look at the accessibility of polling sites, though it will also analyze other aspects of voting precincts, Mindes said in an interview with The Hoya.

“I want to make sure that if you need a wheelchair to vote, that voting machine is positioned so you can vote,” Mindes said. “If the door is heavy, it’s propped open.”

While charities like Disability D.C., a D.C.-based organization that has meetups to increase accessibility around the city, have already begun to conduct independent surveys of polling locations to determine their accessibility for people in wheelchairs, these have not been on the same scale as Observe D.C., Mindes said.

“There’s a problem if you feel like your vote is not safe or you don’t feel safe going to a polling station,” Mindes said. “We’re trying to set the example for everybody else,” he said.

The findings from the sample will allow Mindes and his Observe D.C. team to compare voting across the District’s eight wards and compile reform recommendations that can then be submitted to the D.C. Board of Elections.

Leaders of both GUCR and GUCD both said they valued the efforts of Mindes to improve voting systems in D.C.

“A nonpartisan initiative like Observe DC is a great way for people fulfill a part of their civic duty and try to help make our democratic system a little better,” GUCR President Jake Lyons (SFS? ‘20) wrote in an email to The Hoya.

“I have heard and read so many stories of people who have been intimidated at the polls, given misinformation regarding their polling station or voter ID requirements, or who have found polling stations to be inaccessible,” GUCD Chair Maria Cornell (SFS ’20) wrote in an email to The Hoya. “This should be unacceptable, and I think Observe D.C. will take us one step closer to ending this type of voter suppression and will revolutionize our electoral processes,” she said.

Mindes came up with the idea for Observe D.C. while working for the National Democratic Institute, where he researched international affairs and elections. NDI helped develop sample-based observations that relied on sending observers to random polling locations and acquiring representative data about voting patterns in the country, Mindes said.

Mindes hopes the pilot will serve as an example for jurisdictions around the country that may lack trust in electoral processes, so that they will be able to put on similar efforts in future elections.

The U.S. has over 10,000 jurisdictions each with different voting procedures so the initiative will only be implemented in Washington, as it is tailored to the district’s voting methodology, Mindes said.

However, the initiative has the potential to demonstrate the feasibility and benefits of such nonpartisan analyses for improving voting across the country, according to Mindes.

“The long game is introducing this type of election observation as a new avenue, especially for young people, to engage in the political process and have oversight over elections in their backyard,” Mindes said.

The funding for Observe D.C. came from a $20,000 dollar grant from the Baker Center for Leadership and Governance at McCourt. Mindes was one of five recipients of the Baker Innovation Award.

“Adding a level of oversight that is citizen-led and independent can help safeguard the institution of elections in the United States,” Mindes said. “For people who care about elections without an avenue to improve the system, this is your opportunity.”