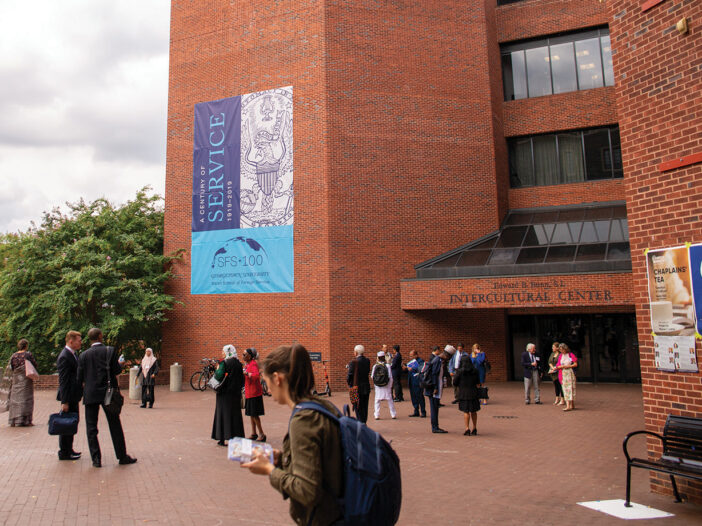 CW: This article references violence in Afghanistan. Please refer to the end of the article for on- and off-campus resources.

Graduate students worked to secure charter flights for the evacuation of Afghans at risk of being targeted by the Taliban, special immigrant visa holders and former U.S. government employees. The students organized fundraisers, coordinated with nonprofits to raise money for evacuation efforts and facilitated communication with people on the ground directly assisting Afghans with evacuation, according to Kristie Cole (GRD ’21), who serves as the School of Foreign Service’s chief development officer and raised money and awareness for nongovernmental organizations (NGOs) helping Afghans escape.

Students involved played different roles throughout the process, with some communicating directly with evacuees and others facilitating fundraising efforts, according to Cole.

“I just started calling my network. I just started to put feelers out,” Cole said in a Zoom interview with The Hoya. “I was really touched by the response. These were donors that I had worked with in years past, and they came forward. What was really crazy is how many donors kept coming forward.”

Students collaborated with a wide variety of organizations to coordinate evacuations, according to Cole, including organizations like No One Left Behind, a nonprofit committed to helping interpreters and their families evacuate Afghanistan and start new lives in the United States.

Undergraduate students at Georgetown have also assisted refugees in Afghanistan; the university’s chapter of No Lost Generation, an organization that fundraises for refugees, hosted an on-campus donation drive for those who escaped Afghanistan and arrived in the Washington, D.C.-Maryland-Virginia area. Further, Zahra Wakilzada (SFS ’23) launched a fundraising campaign to help evacuate her own family members still in Afghanistan.

“You had private citizens, volunteer groups, nonprofits, NGOs coming in and partnering with the government, trying to navigate government entities with trying to get charter planes landed,” Cole said in a Zoom interview with The Hoya.

To further organize the effort, students created and maintained an aggregated database of information about thousands of Afghan evacuees, according to Kurt Sikkema (GRAD ’21).

“We worked directly with on-the-ground contacts in Kabul as the liaisons of the list to help create the flight manifests,” Sikkema wrote in an email to The Hoya.

With a diverse range of experience and expertise, the students collaborated with each other and other organizations to help mobilize the evacuation effort almost immediately, according to Lauren Burt (GRD ’21).

witness as was their ability to make things happen in the most crucial times, with limited resources, and a ticking clock,” Burt wrote in an email to The Hoya. “Lives were at stake and every moment mattered.”

In addition to fundraising for NGOs and nonprofits, communication was a central focus as students attempted to garner public support, according to Burt.

“The cohort group was working within a very short timeframe in a crisis situation, and everything had to happen fast,” Burt wrote. “The correct messaging strategy was crucial, as was the ability to remain nimble and accessible for media relations as we wanted to inform the public about what was happening on the ground in Kabul so we could get more people involved to help.”

Grad students also worked with other nonprofits, such as Ark Salus, a group of U.S. veterans who have helped Afghan refugees evacuate.

From the United States, students and others helping the initiative spoke directly with those evacuating to help them board charter flights, according to Cole.