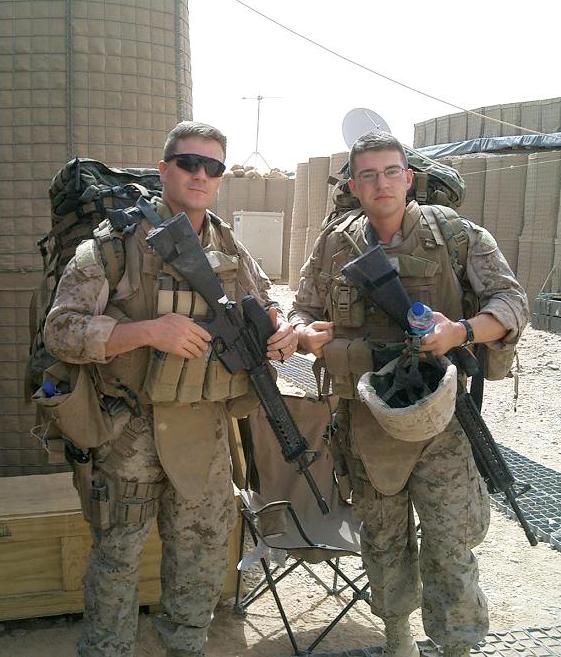 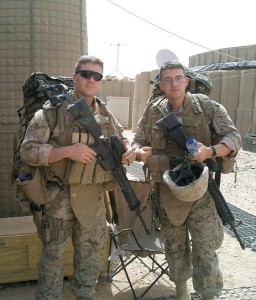 A quick succession of mortar explosions broke the stillness of the night. Soldiers immediately ran for cover. All they could do was wait it out, though no one had any idea how long the attack would last. Crouching down, Nick Phoutrides (SFS ’06) thought back on rowing on the Potomac at the crack of dawn, eating Wisey’s chicken madness sandwiches and attending 11:15 p.m. Sunday Mass – and about how all of these things now seemed so distant.

Phoutrides had experienced explosions in training, but this first attack in Afghanistan was nothing like the controlled settings of Marine training camp. It was in this moment that Phoutrides, a first lieutenant, said that he realized how precious life is.

“During our first rocket attack, my stomach contracted, and I realized I was really here and there are really guys out there that wish the worst for us,” he said. “The explosion was like in training, but here it was real, and I could feel the shake and see the flash more intimately than I thought I would have.”

Phoutrides underwent this training in the Platoon Leaders Class program at the Marine Corps Officer Candidates School in Quantico, Va. Upon graduation of the PLC, students are commissioned to the title of Marine second lieutenants.

Stationed in the Helmand Province, Phoutrides said that Afghanistan’s landscape reminds him of China, where he lived when he was younger and studied abroad during his junior year at Georgetown.

The southern reaches of the country, where he is stationed, are covered with barren mountains and deserts. As they moved throughout the southern province, Phoutrides and his unit were exposed to the everyday life of Afghans. Eventually, he said, he was able to adapt to this new environment and lifestyle.

“For a while, we were living in mud huts in Garmsir village, surrounded by poppies and marijuana plants,” he said. “Food is good when it’s not a Meal-Ready-to-Eat. There are usually good amenities, and sometimes the locals will come to sell things from the market.”

An international politics major, Phoutrides entered Afghanistan thinking he had already accrued plenty of knowledge on foreign policy – but now, he said, he sees real world players in a real-world setting. He said that as a Marine in Afghanistan, he has learned the limits of American hegemony.

“I’ve come to see that even the mass of American power has limitations, and that I and my Marines are part of that limit. Our commitment to this effort needs to be long-term if we’re going to see change, and it needs to encompass more than pure military might,” he said.

A few nations away in Iraq, Second Lieutenant Greg Wilbur (SFS ’06) is also seeing his foreign studies come to life.

Wilbur works as an adviser to senior staff members of the Iraqi security forces, which include all the military, paramilitary and civilian law enforcement entities that serve under the Iraqi government. He said that he volunteered for this job because he wanted to be involved in the removal of U.S. troops once the Iraqis are “ready.”

Prior to his departure last February, Wilbur was already familiar with Middle Eastern culture from his year abroad in Egypt, which he said was very similar to Iraq. Wilbur said, though, that the war has changed the society in Iraq, particularly in terms of crime.

Wilbur also went to the Marine Corps Officer Candidates School in Virginia. He trained in the Officer Candidate Course which involves an intense 10-week summer training session and, similar to the PLC, provides the title of second lieutenant upon graduation.

“[Officer Candidate School] is 10 weeks of pain. It’s not a training environment. It’s a screening environment,” Wilbur said. “It’s fun to look back on it, but honestly, when I was there, I did not think it was so funny.”

Even the harsh training was not quite enough to quell the anxiety he felt when he left the camp to go overseas.

“You feel like you are dressing up to go to battle. You are nervous that the plane’s going in,” he said. “You get out, and you realize it doesn’t feel that it’s that different.”

Neither Phoutrides nor Wilbur took part in the Reserve Officers’ Training Corps instruction on campus. After graduation, they said, they were ready to enter the armed services. Phoutrides decided to work for a summer in London before taking his commission, while Wilbur accepted his commission the day after his graduation.

“I just wanted to get straight into it. I reported to training a month after I graduated,” Wilbur said.

Back at Georgetown, 34 students are currently readying themselves for a similar journey into the armed forces. Members of the Hoya Battalion of ROTC, who commit themselves to four years of active military service after graduation, wake up three days a week for 6:30 a.m. physical training sessions. ROTC members must also take an extra three-hour course on military leadership or army values to their schedules.

“The first thing you think about [when you wake up] is the next time you get to sleep,” Stephen Sikes (SFS ’09), a member of the Hoya Battalion, said. “But I actually really enjoy the training. Every day you start with [physical training], it’s a great feeling.”

“The juniors are the ones put to the test [during the physical training session],” fellow battalion member Tim Swenson (COL ’10) said. “They come up with the training sessions, which normally involve push-ups, sit-ups or a run down to the monuments.”

Since those that signed up for ROTC programs did so during wartime, it is likely that graduates will see at least one deployment during their four years of active service post graduation, Sikes said.

“Deployments are difficult, but when it comes to what you’re fighting for, that’s what it’s about,” he said. “But when you’re side by side with people who are prepared, you have confidence that they’ll keep you safe.”

Sikes said that the training and structure of the Army bestowed upon him an unmatched level of personal discipline.

“I’ve grown up with privilege, but that does not necessarily build a disciplined person,” Sikes said. “I saw that as a shortcoming of mine, and I saw [the Army] as an opportunity to shore up those qualities.”

Wilbur said that a change in personality is inevitable in the Army; both he and Phoutrides explained that they are mellower and more patient than they were before training.

“It definitely is a life-changing event in a lot of ways,” Wilbur said. “You realize at a certain point you’re going to be a different person.”

And Phoutrides also took a different view on life.

“One of the lessons they hammered home to us in basic training was the necessity to live one day at a time and not worry too much about next week or month,” he said.