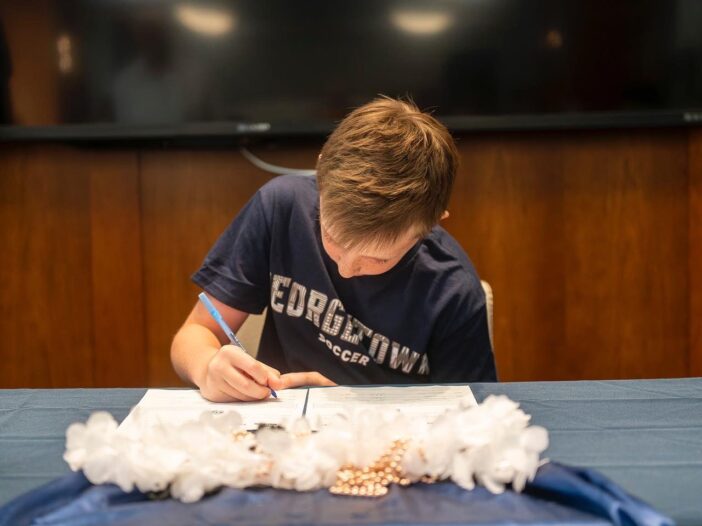 Just a few matches into the 2022 season, the Georgetown University men’s soccer team has already produced another rising star for Hoya fans to celebrate.

On Monday, Aug. 15, 13-year-old Gramm Hinckley signed with the Hoyas on a two-year deal. A prized recruit from Paragon Futbol Academy in Silver Spring, MD, Hinckley brings years of experience to the goalkeeper position.

Gramm was connected with the Hoyas through Team IMPACT, a national nonprofit organization that connects young people with serious illness and disability with collegiate athletics programs. Hinckley, who has cystic fibrosis, is just one of the 2,300 kids that the Boston-based group has paired with universities since the organization’s founding in 2011.

Typically, families are matched with participating teams based on proximity and the program’s capability to offer emotional and social support both on and off the field. In a virtual interview with The Hoya, Georgetown assistant men’s soccer coach Mike Casper spoke about how the relationship between the charity and his particular group of Hoyas began.

The program had an initial meeting with the Hinckley family last spring, but Gramm was not formally welcomed to the team until a special signing day event this preseason. Casper recounted how the newest Hoya didn’t arrive on his own, and how he became a part of the squad.

“He was able to come with his family,” Casper told The Hoya. “We put on a nice presentation with the Athletic Communication’s help, and Barb, and were able to kind of sign him as an official member of our team.”

Hinckley represents the latest in a proud line of partnerships between Team IMPACT and Georgetown Athletics. In 2019, the Hoyas signed 8-year-old Federica Albanese to their softball team, 7-year-old Drew Snapkowski to their baseball team and 11-year-old Dominic Stanley to the football team the following year.

Georgetown’s tennis and swimming & diving programs have also been involved with Team IMPACT. Other local universities, including George Washington University, Howard University, Johns Hopkins University and the University of Maryland, have also signed Team IMPACT players in the past.

Just under a month into his time with the Hoyas, Gramm has already become a fixture at practices. Coach Casper complimented Hinckley on his enthusiasm and commitment and  described how he channels both of those gifts on the soccer pitch.

“He’s here all the time. He’s definitely on board fully,” Casper said. “He’s always around our five goalkeepers and Coach Bouhl, who trains our goalies. He’s always working with that group.”

On game days, Gramm puts his soccer instincts to good use by serving as a ball boy during matches at Shaw Field, such as the 1-1 draw against the Denver Pioneers on Sept. 5. He will serve in this role for the remainder of the season, as well as during next year’s season.

Even over a short period of time, Coach Casper made clear that Gramm has made as much of a difference in the lives of Georgetown’s student-athletes as they have made in his.

“I think that Gramm being involved has certainly given the guys a new perspective. Here’s a young guy, a young boy who’s got real challenges and real health issues. And he wakes up every day with a positive attitude, and he tries to play soccer and go to school and do the best he can with everything,” he said.

Gramm and the rest of the Hoyas will take to Shaw Field on Saturday, Sept. 10 for a highly anticipated local showdown with the No. 9 Maryland Terrapins.