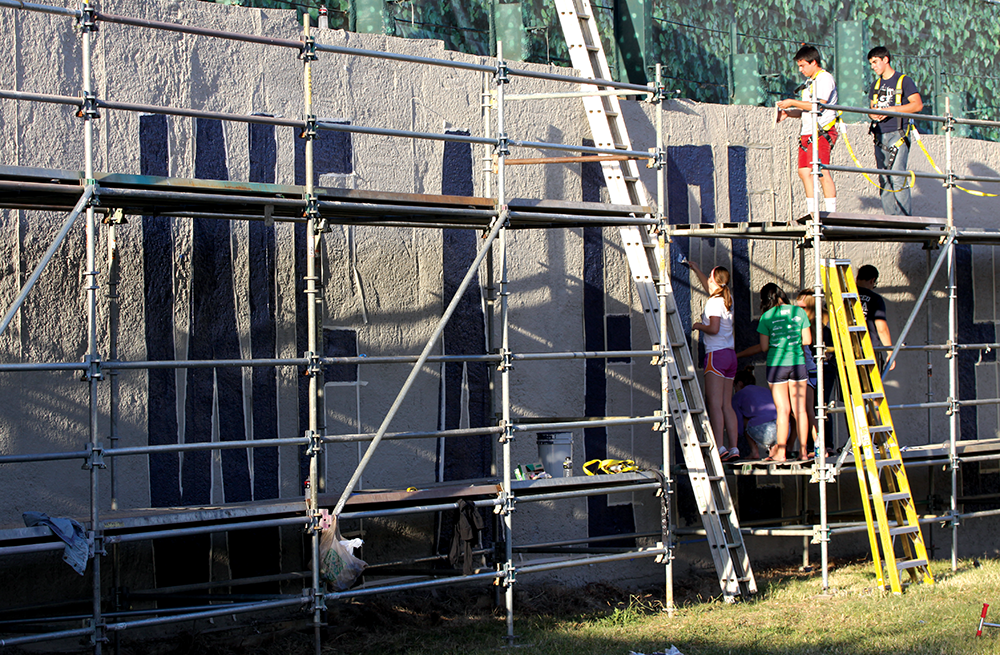 Student volunteers painted a mural on MultiSport Facility on Thursday as part of an effort that Hoya Blue and the Office of Facilities is undertaking to make use of concrete walls around campus.

The project was originally scheduled to be done Sunday but was delayed because there was a scheduling problem with the stencilist.

The project is the result of conversations over the summer between Georgetown University Student Association Vice President Adam Ramadan (SFS ’14) and Facilities, who both recognized that the wall, currently bare, could use improvement. The possibility of a mural near Yates Field House was also suggested on Georgetown Ideas where it garnered 116 up-votes. ReImagine Georgetown awarded $3,000 to the Georgetown University Murals Initiative last November, but the group was not involved in this project.

“We just thought it was a spot on campus that could surely be beautified,” Ramadan said. “The idea to paint various concrete walls came up in Ideascale, but this was a good place to get started because it is under ownership of one university department, and we could learn from this project if and when other walls on campus get beautified in the future.”

Ramadan reached out to the Athletic Department, which is in charge of MultiSport Facility.

Student spirit group Hoya Blue was given the opportunity to design the mural, which says “We are Georgetown.”

“It’s kind of a sore spot on campus,” Fiorica said. “It’s a stadium that wasn’t completely finished, so now we just want to make it look nicer and … make our stadium have more of a homey feel.”

Along with paying for the mural’s creation, the Office of Facilities has worked closely with Hoya Blue and GUSA to ensure the safety of student volunteers, many of whom used scaffolding while painting.

“There aren’t many places on campus that scream Georgetown Athletics,” Ramadan said. “[The field is] our primary venue for football and lacrosse [and] we don’t really have a huge presence. This is a nice quick fix that still aesthetically makes a big difference.”