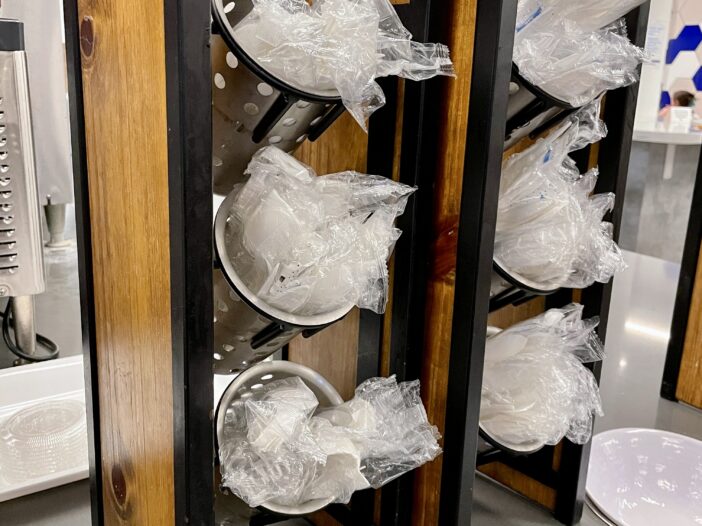 Students want reusable dinnerware to be used at campus dining locations, according to a survey released by the Georgetown Renewable Energy and Environmental Network (GREEN).

GREEN co-president Brooke Hodge (SFS ’24) said the club decided to conduct the survey to the student body’s opinions about  sustainability.

“This survey wanted to demonstrate both to the administration and to Leo’s as a whole that this is not just GREEN’s initiative, but it’s a broader sentiment of the student body that they do care about sustainability,” Hodge said in an interview with The Hoya. “This is something they feel strongly about, and it’s not just a small-subset of environmentally and sustainably-minded students.”

“Before COVID, Georgetown used to have all reusables in the dining hall, and there was post-consumer composting, so all the food waste was put into the compost — so it was actually completely zero waste in the dining hall,” Volkert said in an interview with The Hoya. “But then COVID hit, and public health issued a guidance that we must switch to disposables.”

The university has not provided a clear reason as to why disposable dinnerware is necessary to protect public health, according to Volkert.

The survey was conducted as part of Zero Waste Wednesdays, a weekly initiative where GREEN members table at the entrance of Leo’s and provide information about sustainability, according to Volkert.

“For the first week, we just wanted preliminary results,” Volkert said. “We definitely want to do it again this Wednesday, so we have at least 200 or 300 respondents to show there is large student interest behind this.”

The university plans to adjust to reusable dining ware in the coming weeks, according to the university spokesperson.

“Planning is already underway for a return to reusable serviceware at The Table at Leo’s effective Sunday, March 13, at the same time suspending the use of disposable to-go containers from that location,” the spokesperson wrote in an email to The Hoya.

Georgetown should model its sustainability policy off of American University, the first urban campus, research university and largest higher education institution in the United States to reach carbon neutral status, according to Volkert

“They have all the policies in line to streamline the process of how to go zero waste and carbon neutral in the Office of Sustainability at American, and we should literally just copy that process, but Georgetown just refuses to do it. I think the main reason is because there is not a large student interest behind it,” Volkert said.

Hodge is optimistic about the sustainability progress Georgeton has made, including the creation of a new vice president of sustainability last fall.

“Georgetown is undergoing a much larger transition towards institutionalizing sustainability in the administration,” Hodge said. “I want to emphasize that having a vice president of sustainability is a big deal and not a lot of universities throughout the country have had that.”

So far, however, Volkert said the university’s lack of response to student sustainability efforts is frustrating.

“Not only are they not implementing any zero-waste policies, even ones that they had pre-COVID or anything like that, they are refusing to work with student organizations to move towards zero waste,” Volkert said.

Currently the university offers reusable containers that may be used to take meal to go at Leo’s, as well as enaging with GREEN on Zero Waste efforts, according to the university spokesperson.

This article was updated on Feb. 28 to include additional comments from a university spokesperson.