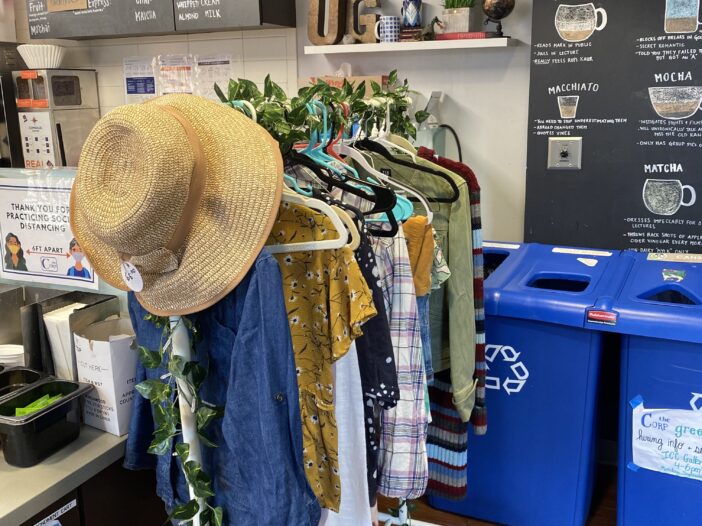 Georgetown Renewable Energy and Environmental Network (GREEN), a campus organization promoting environmental activism, teamed up with UG to open and operate the thrift store. Proceeds from the thrift store will be donated to Georgetown University Mutual Aid Network, a student-run fund that financially assists members of the Georgetown community.

The project aims to reduce fast-fashion waste while giving back to the campus community, according to Rita Alan (SFS ’24), GREEN events chair.

“Textile waste generates a huge amount of energy and water use,” Alan said in an interview with The Hoya. “As fast fashion grows, more energy is being used to make these products. GREEN was talking about that and how there aren’t many good thrifting options available in the Georgetown area.”

The project started developing last semester as an idea to repurpose dorm materials, but soon became a chance for the Georgetown community to upcycle and reuse clothes, according to Brooke Hodge (SFS ’24), co-president of GREEN.

“We started with an empty table for our first clothing swap, and people brought trash bags and bins full of clothing,” Hodge said in an interview with The Hoya. “At our first swap we were left with four bags full of clothing. So many people had this leftover clothing, like party shirts or dresses with tags on them that people didn’t want to return or things that weren’t in season that people didn’t want to use, but that other people loved and were really excited about buying.”

Following these initial clothing swaps, GREEN brainstormed ways to expand the project. After learning about The Corp Green Initiative that aims to make storefronts as sustainable as possible, GREEN reached out to UG to forge a partnership.

Helen Martin (COL ’22), director of UG, said the coffee shop would provide the space and manage the thrift store while GREEN sourced and priced the clothes.

“It’s kind of the perfect balance of what we both needed, and I’m really excited about it. I think it’s a great use of space and it’s helping a great cause,” Martin said in an interview with The Hoya. “We signed a contract between GREEN and UG so that we have this ability to keep going until one party says they can’t any more, which I think is really important because it allows the store to not just be a pop-up, but allows the store to be in UG with help from GREEN for the foreseeable future.”

The partnership hopes to expand the thrift store in the coming months to serve a wider variety of student needs beyond just clothing, Hodge said.

“I think that our grand, long-term vision is to have some concept of a reuse thrift store that can be used to buy clothing, but also school supplies and dorm materials,” Hodge said. “We’ve also talked to Mutual Aid about creating a clothing closet where students are able to access clothing for free rather than pay as a resource for when they have interviews, or if they need winter coats. This would link upcycling clothing and sustainability with elevating accessibility on campus.”

The thrift store project provides students with an ongoing and flexible way to engage with their community through a lens of environmental stewardship, Alan said.

“We may change up the organization that we’re donating to, because all the money we make from the store is donated,” Alan said. “Right now, we don’t have any concrete long-term plans, and we’re letting the project grow organically.”