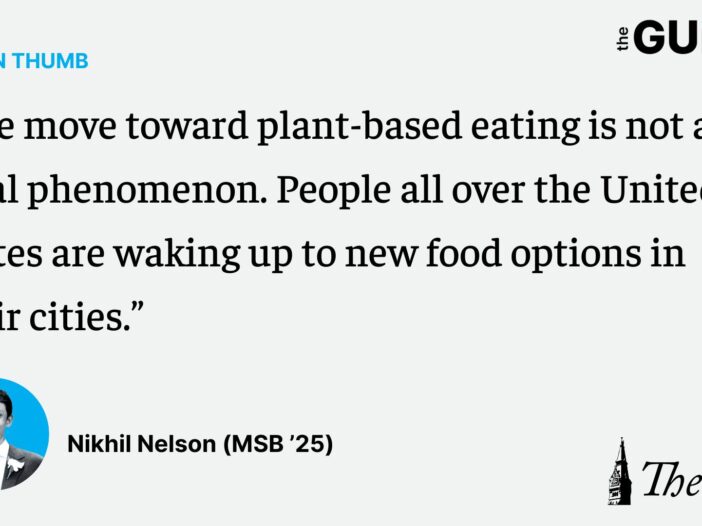 If you’ve been out and about in Washington, D.C. this summer, you’ve probably noticed a recently opened plant-based eatery or vegan fast food spot in your neighborhood. From D.C. Vegan to PLANTA, the District has embraced a wave of plant-based eating that has swept the country. This trend, motivated by personal nutrition, environmentalism and animal welfare, has inspired some of the city’s most innovative restaurants, which have learned to manipulate plant-based products into every imaginable form.

For those who aren’t familiar, plant-based or vegan eating is the practice of consuming foods that are derived solely from non-animal products.

The city’s plant-based eateries run the gamut from fast food joints like HipCityVeg, where one can find a guilty pleasure Smokehouse Burger, to Bethesda’s PLANTA, which serves up elegant vegan sushi and carpaccio. On the other hand, D.C. Vegan, a Dupont-based deli that opened in 2021, offers meaty favorites in plant form. Its meatball bowls, buffalo cauliflower wings and king trumpet calamari rings are so good you won’t miss the meat. D.C. Vegan has also taken things a step further by introducing a line of botanical cocktails and nonalcoholic beverages, which creatively blend fruits, vegetables and herbs into novel mixed drinks.

The move towards plant-based eating is not a local phenomenon. People all over the United States are waking up to new food options in their cities. For instance, Nuno’s, a taqueria in Dallas, Texas, is changing its community’s mindset about healthy eating by recreating local favorites with plant-based ingredients. The taqueria’s owner, Aurelio Arias Jr., was inspired to start the restaurant when he witnessed his dad reverse his heart disease by switching to a plant-based diet.

This summer, actor and comedian Kevin Hart made waves in the vegan community with an announcement that he would be launching a vegan restaurant chain in Los Angeles. Hart House’s August 2022 opening drew hundreds of curious eaters and is likely to expand given its popularity thus far. With this new endeavor, Kevin Hart joins Colin Kaepernick, Woody Harrelson, Billie Eilish and many more celebrities who have endorsed and practiced a plant-based lifestyle.

As eating habits have changed across the United States, the D.C. city council is seeking to adapt with the Healthy Hospitals Amendment Act of 2022. This bill, proposed by Councilmembers Mary Cheh, Janeese Lewis George, Charles Allen and Brooke Pinto will make it mandatory for hospitals in the District to offer a plant-based meal to patients and incorporate “healthful” foods into their other options. Doctors have voiced strong approval to the bill, which they say will help address some of the city’s leading causes of death like heart disease, cancer, stroke and diabetes.

Similarly, universities are rethinking what they serve students, and many have incorporated more options for vegans and vegetarians in recent years. For example, Leo J. O’Donovan Dining Hall, Georgetown University’s main campus dining hall, has made improvements to the cuisines it offers, adding a vegetarian stand at The Table at Leo’s, and offering plant-based proteins at Olive Branch, Sazón and 5Spice.

The Animal & Vegan Advocacy Summit will be here in the District Oct. 20 to 23, and groups from all over the world will come together to educate visitors on environmental and animal welfare issues.

Whether you are vegan or not, check out some of D.C.’s plant-based eateries this fall — whether it’s comfort food at HipCityVeg or a sophisticated dinner at PLANTA, you just might find that you don’t miss the meat.

Nikhil Nelson is a sophomore in the McDonough School of Business.