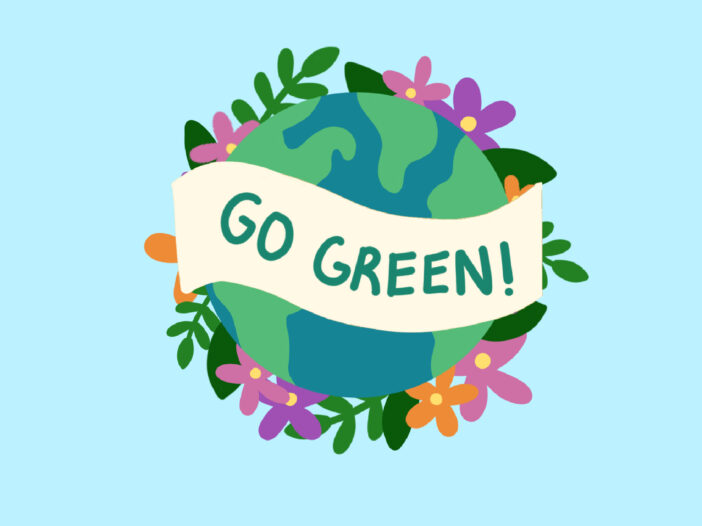 By noon it was sunny, and Red Square was predictably bustling with students excited about the weekly Georgetown University Farmers Market, where several local vendors come to sell food — including empanadas, pizza and popsicles — to the Georgetown community.

But the April 20 farmers market was different because it found itself in the middle of the first GU Earth Week, a student-led, weeklong compilation of sustainability-focused events culminating with Earth Day on April 22.

Chaia, a vegetarian and vegan taco restaurant in the Georgetown neighborhood, made a guest appearance at the farmers market, giving out free tacos in honor of Earth Week. Chaia started as a vendor at the GU Farmers Market in 2013, before opening its Georgetown restaurant in 2015.

The popular restaurant had returned to campus for GU Earth Week in celebration of sustainability, which is central to Chaia’s mission, according to Chaia co-founder Suzanne Simon.

“Earth Day has really turned into a push for being outside and enjoying your surroundings. But those surroundings are enjoyed and beautiful because we take care of the planet,” Simon told The Hoya. “We need to be mindful about our choices.”

Lin Henke (COL ’23), former vice president and current official liaison for GREEN, said she and other environmental student leaders organized the initiative, which ran from April 19 to 22. GU Earth Week expanded celebrations of sustainability from just Georgetown’s environmental clubs to a wider variety of student groups, university departments and outside organizations, according to Henke.

“We wanted to give anyone on this campus the space to organize their own event and have it all under one heading,” Henke said. “The goal of the Earth Week Collaborative was to basically put us all on the same page to organize a bunch of amazing events for Earth Week and make sure that anyone who wanted to could be involved.”

The latest farmers market — composed of several local vendors — was emblematic of the collaborative spirit of GU Earth Week. Throughout GU Earth Week, many student clubs came together to support programming centered around sustainability, both at and beyond Georgetown.

GU Earth Week consisted of over 20 separate events, ranging from clothing swaps, panels and protests to forest bathing, a river clean up and a farmers market. The events focused on sustainability through multiple different lenses, including food, consumerism, the environment and clothing.

Events also emphasized how sustainability is connected to more complex issues, such as holding big corporations accountable for their environmental impact and fighting for Indigenous land rights.

Brooke Hodge (SFS ’24), co-president of GREEN, said that GU Earth Week hopes to highlight and continue the efforts of GREEN and expand these efforts outside of the organization to influence other campus groups.

“We ultimately hope to show that sustainability does not and should not just exist within GREEN and other environmentally oriented groups,” Hodge told The Hoya. “The climate and the environment impacts every student, faculty member, every academic subject and club on campus.”

GU Earth Week aimed to include social justice and affinity groups by covering the intersectionality of environmental issues, with speaker events such as a “Gender and the Environment” coffee chat.

Joanne Stirrup (COL ’23), president of the Georgetown Disability Alliance (GDA), said it is crucial to discuss how the climate crisis intersects with systemic social injustice.

“For GDA in particular, our involvement in GU Earth Week is an important opportunity to spotlight the voices and lived experiences of disabled people of color who have been navigating the climate disaster,” Stirrup wrote in an email to The Hoya. “During the Sins Invalid event, specifically, we wanted to hold space for our communities to learn, mourn, and heal together in the midst of the climate crisis.”

Both GDA and GREEN sponsored the speaker panel, “Disability Wisdom for Climate Crisis: A Conversation with Sins Invalid,” which featured the disability justice-based performance group Sins Invalid and focused on the intersectionality of disability rights and environmental action.

The student-run business The Corp also hosted several GU Earth Week events, such as the Business and Environmental Accountability Panel at Hilltoss, a clothing swap on Leavey Esplanade and a conversation with Georgetown philosophy professor Olúfẹ́mi Táíwò about environmental philosophy.

GREEN has also collaborated with The Corp to promote sustainable initiatives and increase the organization’s use of reusable dishware, according to Jaden Kielty (SFS ’22), co-chair of Corp Green, a Corp sustainability and waste-reduction interest group for employees.

“There has been a lot of renewed energy around making The Corp greener, reducing waste and creating partnership with other university organizations to help tackle rising waste and sustainability issues,” Kielty said in an interview with The Hoya.

Mallory Hybl (NHS ’22), who is involved in the wilderness immersion program GU Outdoor Education, worked alongside the other GU Earth Week chairs to ensure that several student organizations across campus united in their efforts to celebrate Earth Day.

“It really is a grassroots collaborative between different students, departments, professors and tons of different groups on campus as a way to celebrate and bring awareness to the issues facing our Earth right now,” Hybl told The Hoya.

Students in the McDonough School of Business (MSB) in particular have generally been less involved in sustainability issues on campus, according to Hodge, who said she and fellow GREEN co-president Stephane Granato (SFS ’24) wanted to create an event for GU Earth Week that was tailored to business students.

GREEN, along with other clubs, sponsored a new Business and Environmental Accountability Panel event for Earth Week, which discussed how to incorporate sustainability within business models, according to Hodge.

Braden Padberg (MSB ’24) said he was interested in learning more about how businesses will address climate change and be held accountable for their environmental impacts at the panel.

“Since environmental issues are becoming more prominent, I know that the ways big businesses address these concerns will be a vital part of business operations in the years to come,” Padberg wrote to The Hoya.

The leaders of GU Earth Week also hope to spur positive change and take tangible action beyond the Georgetown bubble.

Throughout the week, GU Earth Week collected donations to fundraise for the Potomac Riverkeeper Network (PRKN), a local organization dedicated to the protection of the Potomac and Shenandoah Rivers.

As part of the fundraising efforts, The Corp sold a new promotional Earth Day drink: green tea with mango syrup. Attendees of the Sports Sustainability Field Day and Shoe Drive at Healy Lawn can buy $2 falafel from Falafel Inc., with all proceeds going to PRKN.

Amid all of the events, fundraising for PRKN was a major driving force behind GU Earth Week, Henke said.

“I think any Georgetown University student who has seen the Potomac understands why cleaning it up is a really important thing that needs to happen,” Henke said.

Environmental activism at Georgetown has often been student led, and GU Earth Week was no different.

“Honestly I’m amazed that we ended up with so many cool events under the umbrella of the Earth Week collaborative, which at the end of the day isn’t even a club or organization. It has always been just a few students in a coffee shop trying to facilitate a fun, educational, and meaningful week on this campus,” Henke wrote to The Hoya.

In past years, Earth Week often consisted of separate and overlapping events organized by different clubs due to a lack of unity and communication, according to Hodge.

In an effort to improve Earth Week, Hodge said she worked with Granato and other student leaders to make this year’s GU Earth Week a unified, cross-campus effort.

“Stephane and I wanted to collaborate with as many clubs as possible on campus, and particularly reach out to clubs that are not necessarily sustainably focused,” Hodge said in an interview with The Hoya.

Although there is still much work to be done to promote sustainability on campus and in the world at large, Henke said an important goal of GU Earth Week is to celebrate the progress that students have made so far.

“This has been a huge couple years for environmentalism at Georgetown with the founding of the Earth Commons and GU Fossil Free,” Henke said. “I am hoping that during this week, everyone can take the space to congratulate themselves and congratulate the student leaders who have worked tirelessly to hold the university accountable.”

The Earth Commons (ECo), launched Feb. 15, is a Georgetown institute centered around environmental sustainability research, education and action. GU Fossil Free (GUFF), founded in 2013, was a student-run campaign that advocated for university divestment from fossil fuels for several years.

In February 2020, the University announced that it would divest from all fossil fuels within a 10 year period, due in large part to GUFF’s years of advocacy. The university also hired Meghan Chapple to be the first vice president of sustainability in September 2021.

GREEN members and other Georgetown students will also be taking to the streets of downtown Washington, D.C., to attend the “Fridays for Future” strike April 22, a global climate strike movement started in 2018 by Swedish activist Greta Thunberg. GU Earth Week organized a “Strike Postermaking and Plant Potting” event in Red Square on April 21 to prepare for the Earth Day protest.

It’s important to remember that sustainability and environmental protection falls on everyone, according to Simon. Since its founding, Chaia has prioritized sustainability by maintaining a seasonal, meatless menu and working with local farmers.

But while businesses have a responsibility to champion sustainability, consumers also play a big role, she said.

“We do have a responsibility to understand where things come from, how much of something we are consuming and how much are we throwing away. These things all matter today,” Simon said. “Everyone has the responsibility to take a look around, take a step back and start to make these connections again with the planet and what we’re doing from a consumer lens.”