Robert Groves, director of the United States Census Bureau, has been selected as the university’s next executive vice president and provost.

“I can’t wait to actively interact with students,” he said. “My first job is to learn the aspirations and concerns of students and faculty, so that’s what I’ll do for several months. I’m anxious to hear from my colleagues.”

Groves will replace James O’Donnell, who has served as the chief academic and administrative officer for the main campus since 2002. O’Donnell announced last August that he would be stepping down at the end of this academic year, but he will return to the university in the fall of 2013 as a classics professor after a sabbatical.

Wayne Davis, a professor of philosophy and president of the Faculty Senate, led the selection committee that conducted the nationwide search for a new provost. According to Davis, the committee, which was composed of students, faculty and staff, emphasized three major criteria: a strong academic record, administrative experience and reflection of the university’s Jesuit identity.

“Our top priority for the search was academic excellence, and [Groves’] credentials there are outstanding,” Davis said. “The quality of his academic record is incredible.”

Davis pointed to Groves’ accomplishments at the Census Bureau as proof of his abilities as an administrator. As the bureau director, Groves oversaw the 2010 national census, which came in $1.9 billion under budget.

Davis added that Groves stood out from other candidates because of his desire to further Georgetown’s focus on interreligious understanding and to expand academic service.

According to Bridget Power (COL ’12), a member of the selection committee, student input was an important part of the process.

“It was reassuring to know that the undergraduate student body voice mattered and was something that the selection committee cared about in the process,” Power said.

The university also held a town hall dedicated to collecting student input on the provost search in January that drew about 60 to 70 attendants.

“[I was pleased to see that] students really do care because the provost really does affect student life in a variety of ways, both inside and outside the classroom,” Power said.

Davis believes that the most pressing issue Groves will face is the limit on expansion imposed by  the opponents of the university’s 2010 Campus Plan.

“There’s a real opportunity for an innovative and creative administrator to work with the president and treasurer to find other ways to expand what we do,” he said.

Dr. Trivellore Raghunathan, research professor at the University of Michigan and former colleague of Groves, praised his approachability.

“I can say for sure that Georgetown has got a visionary in the new provost; a warm, nice and caring person and an articulate teacher,” he wrote in an email.

In a Tuesday press release announcing the appointment, University President John J. DeGioia wrote that the breadth of Groves’ experience would prove an asset to the university.

“We are excited to welcome his innovative leadership as we continue to strengthen our academic programs and fulfill our educational mission in Washington, D.C., and beyond,” he wrote. 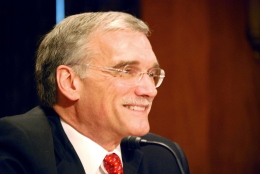