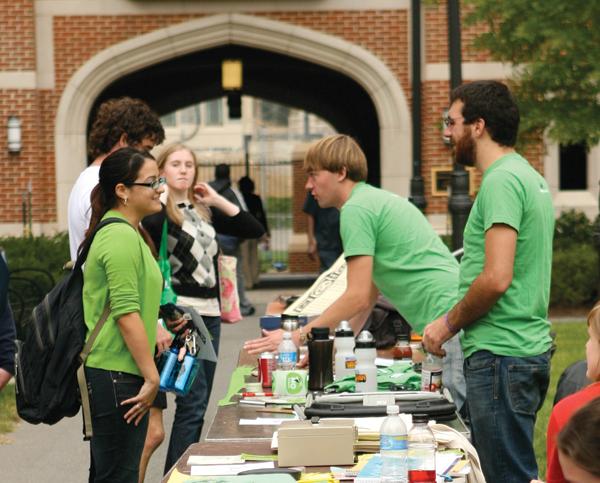 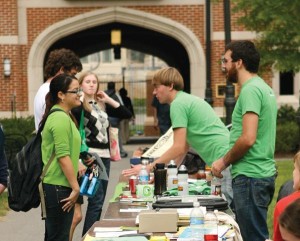 Image Contributor
The Green Fair, held last October, is one of the many events on campus that are sparking environmental consciousness among the student body and administration.

If in the next few weeks you see students digging through trash cans, removing plastic bottles, aluminum cans, and papers, do not be alarmed – it is just one of the many efforts to make Georgetown a greener campus.

Last fall, members of the campus community gathered in the Southwest Quad for the Green Fair, an event that highlighted the university’s commitment to environmental issues. The students echoed the slogan “Bleed blue. Wear grey. Think green,” hoping to interest more students in the issues of sustainability and climate change.

It may not be easy to “go green,” but a group of Georgetown students and administrators are doing their best to inspire the campus community to recycle, conserve energy and make the university a more environmentally friendly place to live.

“The myth that Georgetown does not recycle has lasted a long time, and it needs to be dispelled,” said Jonathan Cohn (COL ’10), president of EcoAction, a group dedicated to addressing environmental issues on campus. “We have been seeing increasing response from [the] administration, and hope that this will lead to more initiatives in terms of energy efficiency, green buildings on campus, sustainability education and information, increased recycling, reduced plastic bag use, and increased attention to renewable energy sources.”

The university took a large step toward sustainability in 2005 with the formation of Project Hilltop, an environmental organization that unites resident hall advisors, resident assistants and residents in sustainability efforts. The group organizes numerous events and distributes magnets and postings to encourage water and electrical conservation throughout campus.

Jess Buckley, the hall director for McCarthy Hall and adviser for Project Hilltop, said that several events are planned for later in the semester.

“We have monthly green campaigns to raise awareness in the residence halls and provide grants for sustainable programming in the halls,” she said.

Buckley added that the university has increased its environmental efforts in several unique ways, from adding new facilities to increasing course offerings.

“We have a solar-powered trash compactor in the [Georgetown University Medical Center] and hope to have more,” she said.

According to the environmental resources at the State University of New York College of Environmental Science and Forestry, the $4,000 compactors can pay for themselves in under a year because they reduce costs of using labor and trucks to retrieve the trash. Syracuse University purchased a similar device last fall.

Georgetown has also built an efficient thermal tank under the Leavey Center to provide cheap cooling when electricity is in high demand, according to the Office of the Senior Vice President. The tank, buried under the parking garage in the Leavey Center, contains over 2 million gallons of water. It is capable of providing a 1,000 tons of water for almost 12 hours during peak demand.

In 2007, the university also hired its first sustainability director, who was hired to lead the efforts on campus to reduce Georgetown’s environmentally unfriendly actions.

All of these moves were praised by the College Sustainability Report Card, issued by the Sustainable Endowments Institute. The organization gave the administration a “B” rating for its environmental efforts and a “B-” rating overall, an increase from Georgetown’s “C+” rating in 2007. This year, criticism was directed toward the school’s lack of endowment transparency and shareholder engagement in environmental issues.

That rating may change next year, though, as the position of sustainability director that the report praised is now vacant. Xavier Rivera, the director of Utilities and Energy Programs, said that the director resigned and now works at the University of Maryland. Rivera said he and another administrator are working as acting sustainability directors but have not assumed the position’s full responsibilities.

“Georgetown officials are in the process of evaluating the specific needs for staffing on sustainability issues and [have] not made any specific determinations yet as to [the] best way to do so,” she said. “We plan to fill the position in some way, but given economic realities and our desire to develop a position consistent with current needs, we do not have a set time frame to do so. The reality is that there are a number of individuals in several offices who have subject matter expertise on a range of issues related to sustainability, and Georgetown’s [Senior Vice President and Chief Administrative Officer] Spiros Dimolitsas coordinates the university’s efforts in this area.”

In addition to these efforts, since the 2007 fiscal year, according to the Office of the Senior Vice President, the university has decided to make all new construction and renovation projects abide by the U.S. Green Building Council, Leadership in Energy and Environmental Design and the Labs21 Environmental Performance Criteria. These standards will include lighting occupancy sensors, low-flow plumbing fixtures, energy management controls and metering devices, Energy Star equipment and appliances and renewable interior finishes.

Taking a cue from other universities, such as The George Washington University, which maintains a “green leaf” list of courses that promote environmentally sustainable practices, Georgetown administrators have also expanded the focus on green activities in the classroom with courses in over 12 departments as well as a new major.

“We have a new biology major focused on environmental biology, and the Class of 2012 has the first opportunity to pursue this major,” Buckley said.

According to Martha Weiss, an associate professor and one of the founders and directors of the new environmental biology major, the option brings together a unique and perhaps even surprising connection between Jesuit ideals and environmental science.

In the Bin to Win

Outside the classroom, students on campus have also begun to promote change, focusing on recycling.

EcoAction’s efforts include building excitement on campus for Power Shift, a national youth activism conference that 35 Georgetown students will attend, and holding events for Earth Day. But EcoAction’s largest growing event is university participation in RecycleMania, a 10-week recycling competition among almost 300 universities.

“Ongoing right now, we are engaging in an advocacy campaign, getting faculty, students and staff to have their photos up on signs that say `I recycle … Do you?'” Cohn said. “Our publicity efforts [will be] strengthened in the next two weeks.”

“Our involvement [in RecycleMania] has evolved over time,” Cohn said. “When we first participated, we were only entered into the cardboard recycling competition, because that was the only category in which our recycling director thought we could be competitive. Since then, we have participated in most of the competitions.”

RecycleMania began on Jan. 18 and will run through March 28. In 2008, Georgetown placed 68th overall in the competition, seventh in the category of waste minimization.

Thus far in the competition, Georgetown has significantly bested its 2008 recycling scores. According to RecycleMania’s Web site, the university’s weekly recycling percentage in the 2009 competition has increased an average of 10 percent each week compared to last year’s numbers.

The enhanced recycling numbers in the competition mirror a trend in the university’s overall efforts. According to Buckley, during the 2006-2007 academic year, 10 percent of total waste was recycled. Last year, that number rose to 26 percent.

According to Bill del Vecchio, the university’s recycling manager, of the 3,800 tons of solid waste that Georgetown will produce this year, approximately 30 percent will be recycled. In addition, he said Georgetown has made considerable efforts to make the collection process more efficient.

“We’ve enhanced the system for collecting other materials such as scrap metal,” he said. “We’ve started an electronic recycling system where we collect computers and office electronics from throughout Main Campus.”

An organic composting plan that has already composted approximately 30 tons of waste, which Cohn and Buckley both praised officials for, will also increase recycling on campus.

“Our grounds crew now uses 100 percent organic fertilizer, using some of our own compost from [O’Donovan Dining Hall],” Buckley said.

ara Schechter (COL ’11), a board member of EcoAction, said that the university’s initiatives are good first steps but added that more can still be done.

“It is great that Leo’s composts, but that remains at the administrative level, without students having much of a stake in the decision. Student participation is key for real environmental change, which is why I would love to see campus-wide composting at some point in the future,” Schechter said.

This semester, Schechter said that she is considering taking matters into her own hands.

“I am particularly interested in starting a community compost garden because it will be a chance to really involve the student community,” Schechter said. “With a garden on campus, students would be able to participate in bringing their organic waste to biodegrade – if organic waste is thrown out, it either sits in plastic in landfills or decomposes and contributes to methane production, a greenhouse gas 23 times more potent than CO2.”

Other universities have created similar student-run farms that have proven both popular and effective. The Burning Kumquat, a student group at Washington University in St. Louis, grows vegetables on campus using compost and natural fertilizers to distribute to the campus community and local farmers markets, according to the group’s Web site.

In a letter to the Clinton Global Initiative, Schechter and other members of EcoAction outlined plans to make the compost garden a long-lasting Georgetown institution.

“In order to ensure that this garden will last beyond our group’s time here, we hope to set up a system whereby students can maintain the compost garden as extra credit or part of a class,” the letter stated. “We hope that it will become a lasting part of the Georgetown and greater D.C. community.”

The group received $3,000 in a Georgetown ReImagine grant from the ReImagine Georgetown partnership, a program sponsored by The Corp, THE HOYA and the Georgetown University Alumni and Student Federal Credit Union that funds projects spawned by creative students seeking to improve the undergraduate experience.

Adam Alfi (MSB ’11), the Green Team vice chair for The Corp, said in an e-mail to Schechter that creating a similar garden may very well be feasible, based on his experience working in Midnight Mug.

“The three Corp coffee shops in Lauinger Library, the Leavey Center and ICC throw away copious amounts of coffee grinds that could be used to make some top-notch compost,” he said. “We are happy to deposit our grinds in the composting bin behind Yates or wherever else it might be useful on campus, but we just don’t have the extra personnel or vehicles to transport our grinds to Yates. We’d love to work with [EcoAction].”

For its part, The Corp provides a 25 cent discount whenever students bring their own cups to a Corp-operated coffee shop. According to The Corp Annual Report, all plastic bags used by the organization are 100 percent biodegradable, and all cleaning products used are completely non-toxic.

Cohn emphasized, though, that the best way to ensure campus sustainability is to place the power in the hands of students themselves.

“We would like to encourage all Hoyas to make steps themselves to be more sustainable,” Cohn said. “Turn off the lights when you aren’t in the room. Unplug your cell phone and laptop at night. Forgo a plastic bag if you don’t need it. Think before you trash.”