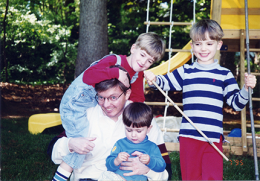 Neal Chaudhuri (COL ’16) didn’t study for his first Georgetown exam. Instead, over 10 years ago, his father had no choice but to rush him to the classroom at the last minute when the babysitter cancelled. Neal’s father, Adhip, taught economics at Georgetown from 1979 until his retirement last year. For the Chaudhuris, as for many families across Georgetown’s departments, the idea of the Hilltop as a second home really comes to life.

For these students who grew up visiting parents on campus, memories of Georgetown go back much further than freshman move-in.

Henry Parrott (SFS ’15) started coming to Georgetown as a 3-year-old, according to his father, psychology professor W. Gerrod Parrott. Henry and his two older brothers, Nick (COL ’12) and Andy (COL ’12), spent afternoons drawing on their father’s office chalkboard before sitting in on his classes a few years later.

“I remember thinking that was fun, and it definitely influenced my decision to come to Georgetown because I was like, ‘Wow, college classes are smart,’” Henry said.

Misa Mori (COL ’17) began attending a course taught by her mother, Japanese language coordinator Yoshiko Mori, when she was a baby.

“It was kind of intimidating to meet her students because they seemed really mature, but I was proud of my mom, and I loved sitting in her classes,” Misa said.

Childhood memories at Georgetown go beyond the classroom for some. Neal Chaudhuri’s parents were married in Dahlgren Chapel, and the family used to attend Holy Trinity Catholic Church.

“My memory is different than someone who just takes classes there,” Neal’s sister, Maya (SFS ’13), said about Georgetown. “Instead of just seeing a building, it’s not just a building — it’s one of my father’s old friends.”

For the two Chaudhuri siblings, Georgetown sports have also played a role in bringing the family together.

“I always picked Georgetown to win March Madness, and in seventh grade, when they reached the Final Four, I got my Final Four all right,” Neal said. “It’s one of my proudest moments.”

The College Choice
For children who grew up on Georgetown’s campus, the decision of where to go to college included some unusual factors.

Even with these benefits, some professors’ children are reluctant to attend Georgetown.

“The number one reason I considered not going to Georgetown was definitely the proximity to home and the fact that I thought for college it was important to get away and sort of broaden your horizons a little bit,” Henry said. “When I talked to my dad about it, what he said is: ‘Don’t forget how big Georgetown is. You’d be amazed how much you can stay there, and it’ll still feel like a totally different world, and if you want to, it’ll be like I don’t even work here.’”

“I thought maybe I should be challenging myself more in terms of distance. At the end of the day, I decided that the fear that I was too close to home — I shouldn’t not choose Georgetown because of it,” Maya said.

Although some students keep Georgetown on their radar, others eliminate the school from consideration early on.

“I actually vowed never to come to Georgetown, and I was very reluctant to even apply here,” Misa Mori said. “My heart was set on Waseda University in Japan, and I really did not expect to get in here, much less decide to come here.”

Fish Out of Water
Both students and parents face a learning curve when it comes to sharing a campus.

For parents, the problem can be striking a balance in how involved they are in their children’s lives. Professor Chaudhuri wanted to help Maya with pre-registration her freshman year but soon decided that it would be better to take a hands-off approach.

“I realized I wasn’t helping and that it was more me imposing on her,” Chaudhuri said. “Tensions were mounting, so I abandoned that. … I realized the best thing to do was to remove myself, to have a good relationship with my daughter.”

Another issue is learning to set boundaries.

“The main thing was twofold: They should never take a course with me … and I wouldn’t give them any inside info that I might have on any faculty members for registration purposes,” Chaudhuri said.

For professors Parrott and Mori, however, Chaudhuri’s first rule presented some complications. Parrott’s son Nick majored in philosophy and psychology but was able to avoid taking any of his father’s psychology classes. Misa Mori, Professor Mori’s daughter, however, had no choice but to take her mother’s classes because of the small size of the Japanese department.

“She calls me Mori-sensei,” professor Mori said. “It feels weird, but it’s a class. She keeps a distance between her and me. I can’t say that I don’t feel anything at all, but I try to be as objective as I can, and I think I can do that.”

Misa said that because of her mother’s professionalism, the experience has been less awkward than she thought it would be.

“She is hard on me, as she should be,” Misa said. “I’ve actually learned a lot more from her than I ever expected I would during this semester.”

Having friends enrolled in a parent’s course can prove just as strange.

“It happens quite a bit and usually it’s pretty funny, especially when people first make that connection between me and him,” Henry said.

“I think people are smart about it when they do make the connection. They’re not just going to badmouth him to you, but at the same time, I’ve had someone say, ‘Your dad screwed me on that exam,’ but in my mind, I say, ‘I think you screwed yourself,’” Neal said. “It’s awkward, but it’s funny. I liked hearing their response because in a sense, I’ve been in my dad’s class my entire life.”

Face to Face
In spite of the occasional awkwardness, Neal said he was glad to have both his sister and father on campus for his first year at Georgetown.

“Transitioning your freshman year is hard for everyone no matter what anyone says, and having people so close in those really rough moments, when you really need them, is priceless,” Neal said.

Neal also said that his father’s position as a Georgetown professor has allowed the two of them to connect over their shared experiences.

“When you talk about how hard school is, he knows. When you’re talking about how everything is going, he has such a better idea of what context it’s in, and he can understand a lot more without you having to say so much more,” Neal said. “It creates a really great understanding of what your situation is like and what the unique pressure and stress is like here on campus.”

“At the end of the day, it was actually a bad thing for me,” Henry said. “I wasn’t pushed under the water and forced to swim for myself the way that so many other freshman are. … I didn’t have the same sort of pressure to find where I really wanted to be and find my place on campus.”

While Henry eventually found his place by pledging Alpha Phi Omega his sophomore year, studying abroad this fall in Shanghai has also brought a new perspective to his Georgetown career.

“The situation of having him abroad is different and may be a way that it’s more like for parents all the time when their kids are at college, although the added complexity of traveling in China is different from going to Notre Dame,” professor Parrott said.

For Henry, studying abroad has helped affirm his choice to attend Georgetown.

“I sort of noticed that when I first got here it felt a little bit like the way most people describe their freshman years of college,” Henry said. “Study abroad showed me that I didn’t miss out on anything.”

Ultimately, Henry advised others in the same situation to choose a school based on their own interests — not whether their parents will be having office hours down the hall.

“Take your parent out of the equation completely and make your decision based on that, because at the end of the day, it comes down to this school and whether or not you’re going to be happy here,” Henry said.