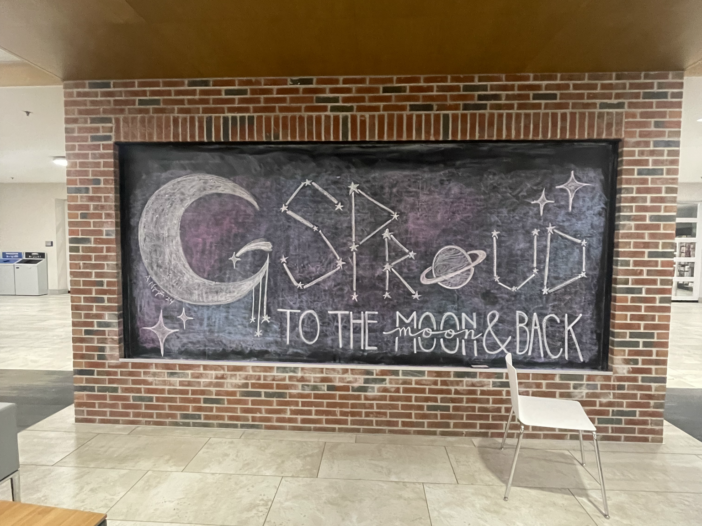 The GSProud campaign, which launched in 2015, aims to celebrate FGLI students and build community among members of GSP, a program that supports FGLI students on campus. This year’s event, which was the first in-person celebration of GSProud since the COVID-19 pandemic began, featured events including a kickoff celebration on Healy Lawn, a game night, karaoke, a community dinner and a group photo of GSP members.

Throughout the week, GSP posted on social media and designed a number of installations around campus, including GSP-themed chalk murals in Midnight Mug, the student run coffee shop in Lauinger Library, and Sellinger Lounge, as well as posters with pictures of GSP students in Red Square. The theme of this year’s GSProud week was embracing the voyage, celebrating the different paths students took to Georgetown and their contributions since arriving.

Sofia Chen Ma (MSB ’23), GSP’s student board president, said the theme was meant to highlight students’ diverse experiences before and during their time on the Hilltop.

“We all have different journeys and different pathways in college, but we still, at the end of the day, we’re still GSP peers. So that’s the theme of embracing your journey at Georgetown and embracing the fact that you are a part of a very vibrant community,” Chen Ma told The Hoya.

Colleen Roberts (COL ’15) , one of the founders of the campaign, said GSProud encourages conversations about disparities in wealth and socioeconomic status in the broader Georgetown community and normalizes the experiences of the FGLI community.

“Money — and socioeconomic status — was not something that I was always comfortable talking about but GSP normalized the experiences of FGLI community,” Roberts wrote to The Hoya. “We created the GSProud campaign because it was an opportunity to extend that conversation beyond GSP and into the wider community.”

According to Jimmy Ramirez (COL ’15), another founder of the GSProud campaign, GSP has previously partnered with other campus organizations to promote visibility of FGLI students.

“We did a partnership with The Corp where we talked about hiring across class levels,” Ramirez told The Hoya. “We did partnerships with Blue & Gray tour guides to have GSP spoken about on campus tours because not everyone on those tours comes from a family who can afford the Georgetown tuition.”

This year, GSProud has built on its original collaborations and partnered with Georgetown Mutual Aid to host an open-mic night, the GU Farmers Market to provide a 25% discount for GSP members and ESCAPE and the Women’s Center to share support for the program on social media.

Missy Foy (COL ’03), executive director of GSP, said the GSProud campaign has shifted the culture around being a FGLI student at Georgetown.

“The GSProud campaign was started by our student board several years ago to help students publicly and proudly self-identify as first-generation or low-income,” Foy wrote to The Hoya. “In GSP’s very early years, students sometimes felt ashamed of these identities; programs like GSProud, led by students, have really helped shift the culture to one of pride.”

“It’s nice to see other students who are also FGLI being open about that part of their identity,” Lin told The Hoya. “There is some comfort in knowing who else is GSP and fostering a sense of comradery.”

Roberts said GSProud has grown tremendously from its original iteration.

“GSProud started with a social media campaign where we asked our friends to chime in on the chosen day,” Roberts wrote. “Today, GSProud is so much more — I still receive GSP emails and I see that it’s a full week, full of events and sustained conversations.”