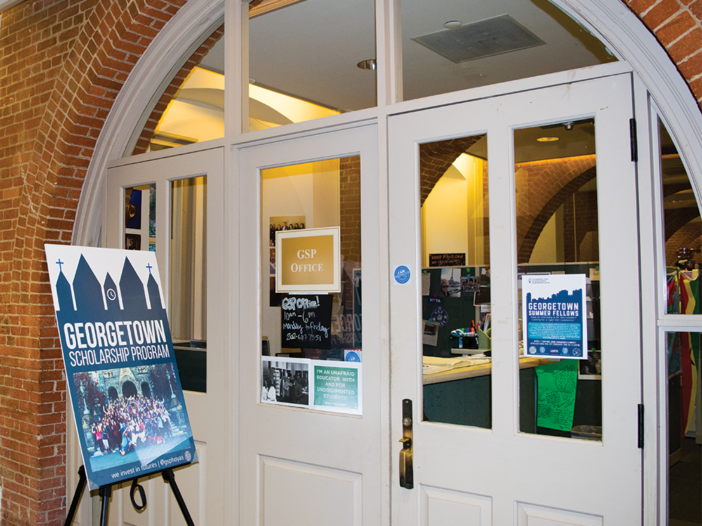 The Georgetown Scholars Program (GSP) plans to hold protests next week to demonstrate its continued outrage over the program office’s relocation from Healy Hall.

Students leaders from GSP, which provides support for first-generation and low income undergraduates, will hold a teach-in with the Georgetown University Student Association (GUSA) on Oct. 13 regarding the importance of GSP’s office location in Healy. Following the teach-in, GSP and GUSA plan to hold a sit-in to advocate for GSP’s return to Healy Hall, according to a statement from the GSP Student Board to The Hoya.

Both protests will help inform the student body about GSP’s eviction, according to the GSP Student Board.

“We hope these efforts will gain traction with the larger student body,” the statement said.

GUSA values GSP’s work and is dedicated to supporting the program’s welfare on campus, according to Speaker of the GUSA Senate Leo Rassieur (COL ’22).

“GSP is a community that is near and dear to our hearts,” Rassieur said in a phone interview with The Hoya. “GUSA’s very passionate about advocating for marginalized communities, and first generation low income students are some who need the most institutional support and who we believe the university should be taking steps to provide more resources to.”

GSP leaders were first informed in January 2021 that the university planned to move the GSP office to basement office spaces in New South Hall. The move comes as part of a university initiative to consolidate into one space organizations under the Office of Student Equity and Inclusion (OSEI), including GSP, the Women’s Center, the LGBTQ Resource Center, the Center for Multicultural Equity and Access and the Community Scholars Program.

The OSEI consolidation was delayed, however, after a structural engineer found structural concerns in the New South basement offices.

As a result, university administrators temporarily relocated GSP to a space on the fourth floor of the Leavey Center. The office has not yet opened to students, however, as GSP administrators and student leaders continue to unpack and prepare the office. GSP leaders plan to open the office to students in mid-October, according to the GSP Student Board.

GSP Students first learned of GSP’s move from Healy in August 2021, sparking outrage and concern among both students and graduates, who argued the move would decrease GSP’s visibility and accessibility on campus.

In response to the move, students began circulating a petition on Change.org calling on the university to return GSP to Healy. As of Oct. 6, nearly 1,300 people have signed the petition.

Prior to the planning of the teach-in and subsequent sit-in, GUSA circulated a separate petition calling on the university to move GSP back to its original location in Healy. As of Oct. 6, the petition had received signatures from over 375 students and 43 organizations.

Georgetown is committed to providing GSP a dedicated space on campus, according to a university spokesperson.

“Our priority is to ensure that all of our student support programs, including GSP, have a strong foundation for continued success,” a university spokesperson wrote in an email to The Hoya. “We hear the concerns being raised as we work to bring together the student resource centers affiliated with the Office of Student Equity and Inclusion and are committed to ensuring that centers serving students have distinct spaces that celebrate independent identities, while also coordinating staff resources to best serve students.”

The university plans to begin renovations in the original GSP office now that the program has moved out of Healy. While there are no definite plans for what will replace GSP in the space, the university will engage students in the decision-making process, according to a university spokesperson.

Regardless of administrators’ plans for the space, to Rassieur, upcoming demonstrations like the teach-in and sit-in are an important effort in helping GSP return to Healy.

“I feel like we’re coming together as a community, and I’m confident that we can put a stop to this decision, given just how many students feel so strongly about keeping GSP in their rightful home,” Rassieur said.