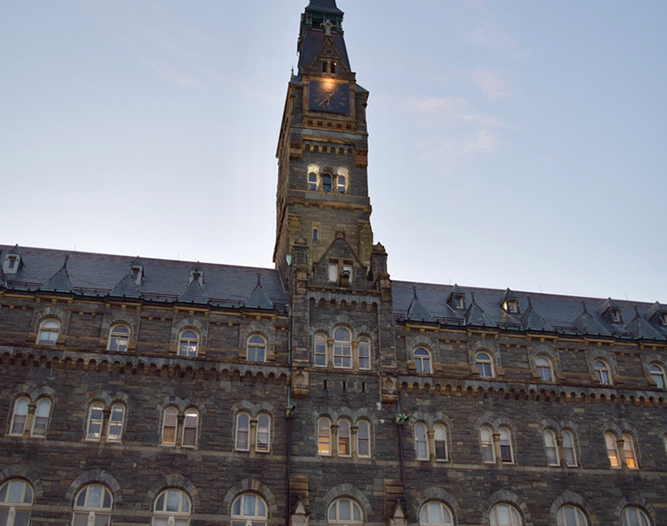 Georgetown University announced Oct. 11 that the Georgetown Scholars Program (GSP) could return to its office space in Healy Hall following nearly three months of student protest around the program’s relocation.

GSP students were first informed that the program, which provides support for first-generation and low-income (FGLI) students at Georgetown, would be allowed to return to Healy in an Oct. 11 email to GSP students obtained by The Hoya.

Many GSP students and other organizations on campus are celebrating the relocation.

According to Hannah Ajibola (NHS ’24), who formerly served on the GSP student board, while GSP’s homecoming to Healy is welcome news, the move should never have happened in the first place.

“It was really awesome to hear, relieving, but in a way at the end of the day we shouldn’t have had to leave in the first place,” Ajibola said in a phone interview with The Hoya.

GSP students were first notified in January 2021 that the university planned to move the program’s space from its original location in Healy Hall to an office in New South Hall. The move was meant to be part of an effort to relocate campus resources and programs under the Office of Student Equity & Inclusion (OSEI) into a single office space.

Georgetown administrators delayed the move, however, after an engineer discovered structural concerns in the New South office spaces, leading to GSP’s temporary location to a space in the Leavey Center. GSP will no longer be required to move as part of the OSEI consolidation and will instead remain a part of the Division of Student Affairs, according to the Oct. 11 email.

The Georgetown community first learned about GSP’s relocation in late August, sparking outrage among students and graduates and leading to advocacy calling on the university to reverse its decision. Most recently, GSP student leaders and members of the Georgetown University Student Association (GUSA) planned to hold a teach-in Oct. 13, followed by a sit-in to raise awareness of GSP’s relocation. Both events were canceled following the announcement that GSP would return to Healy.

Student and graduate activism demonstrates how important GSP is to campus life, according to GSP graduate Rashawn Davis (COL ’14).

“It speaks, one, to just how much GSP means to some people — the fact that not just current students, but alum, have challenged this and really been a voice for GSP,” Davis said in a phone interview with The Hoya. “I think it speaks to just what that program means to so many people past and present.”

While GSP’s move back into Healy is a step in the right direction, the university has damaged its relationship with FGLI students, according to Leo Rassieur (COL ’22), speaker of the GUSA Senate.

“Needless to say, the consideration of GSP’s relocation shows how weak the University’s commitment is to GSP and to FGLI students, and it is our hope that Georgetown can work to rebuild that trust moving forward. This announcement is an optimistic step in that direction,” Rassieur wrote in an email to The Hoya.

The university recognizes the role and symbolism that GSP has within the Georgetown community, according to the Oct. 11 email.

“Since 2004, the Georgetown Scholars Program (GSP) has been a pillar of support within the Georgetown community — providing financial support, advising, mentorship and a sense of community for students who identify as first-generation and low-income,” the email reads. “We hear your concerns about being moved out of Healy Hall. While engagement and planning for the space is still underway, we can confirm that when renovations to the Healy ground floor are complete, GSP will be returned to new and improved space there.”

When contacted for comment, a university spokesperson referred The Hoya to the Oct. 11 email.

While the university has supported GSP in the past, the relocation saga has reinforced the importance of GSP to the Georgetown community, according to Davis.

“I think Georgetown has been committed to first-generation students for a long time, they’ve done really good work. I think the creation of GSP is an example of that, but I think with any large entity, whether it’s a university like Georgetown, or whether it’s a city like Washington, D.C., sometimes folks need to be reminded of how important some things are,” Davis said.

Akibola said that although the situation was distressing, she saw the impact of continued advocacy throughout the process.

“At the end of the day, advocating for ourselves is really important in the situation because if we hadn’t advocated, we wouldn’t have been given a chance to go back to Healy,” Ajibola said.