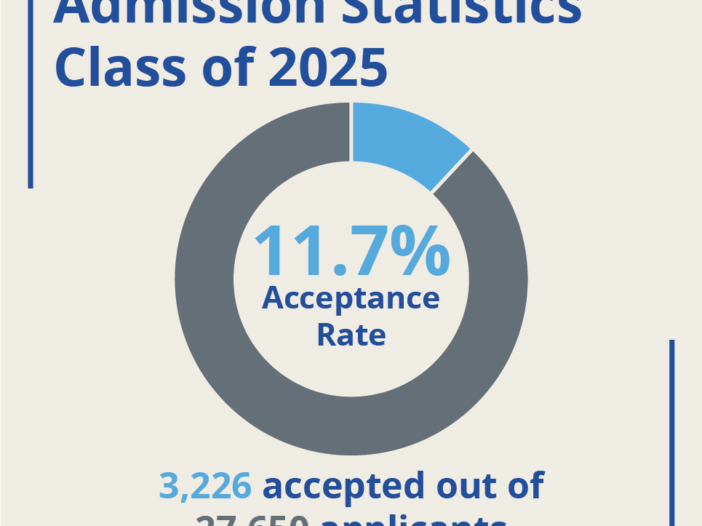 The university admitted a total of 3,226 students to the Class of 2025 out of a pool of 27,650 early decision and regular decision applicants. This year’s applicant pool increased by 30% from the previous year’s pool of 21,318 applicants, which experienced a slight decrease in the number of applicants from the Class of 2023 pool. This year’s admissions cycle marks the fourth time in the last five years the acceptance rate has dropped to a new record low for Georgetown.

The admissions office was not anticipating this large an increase in applications this cycle, according to Dean of Undergraduate Admissions Charles Deacon (CAS ’64, GRD ’69).

“We were surprised by the increase especially since we did not adopt a test optional policy and do not accept the common application, both factors the national media have used to explain the increases elsewhere,” Deacon wrote in an email to The Hoya. “Our best guess is that, unable to research in the usual way, students applied more frequently to high brand recognition schools and especially those with some unique attributes like location, for us DC, or characteristics like our jesuit values which we promoted as contributing to the common good at a very stressful time for our country.”

The acceptance rate fell not only because of the 30% increase in applications but also because the university set an enrollment target of 1,500 first-year students — a decrease from last year’s target of 1,600 students — according to Deacon. Deacon said the decreased target in this first-year class was necessary because of the number of students who elected to take a leave of absence this year and the need to stay within the Washington, D.C.-required enrollment cap, which limits the number of students Georgetown can have on campus.

The Georgetown Admissions Ambassador Program (GAAP), a student organization that helps prospective and admitted students discover Georgetown, will once again be hosting virtual events because of safety concerns surrounding the pandemic. GAAP will be hosting programming throughout April for admitted students, according to Deacon.

Unlike previous years, students were not required to submit SAT or ACT scores with their applications in an effort to increase flexibility in the application process in light of the COVID-19 pandemic but were still encouraged to do so. Despite this change, over 80% of applicants submitted test results as part of their applications, and just under 90% of those admitted had test results, according to Deacon. Georgetown has not adopted a fully test-optional policy, even as peer institutions like the University of Chicago have moved to do so.

The College Board discontinued SAT Subject Tests in the United States this year, forcing Georgetown to change its testing policy, which previously strongly encouraged applicants to submit three Subject Test scores as part of their application.

Although the COVID-19 pandemic has forced many schools to reconsider the value of standardized testing and to revise their application policies, standardized test scores from the subject tests were important for Georgetown admission’s holistic review process, according to Deacon.

“Our admissions committees valued the subject tests and are disappointed that they are no longer available,” Deacon wrote. “We will continue to allow applicants who are not able to access the SAT or ACT due to Covid to apply without the test but it is our expectation that vaccines will be readily available by this summer and we expect that most applicants should be able to fulfill the testing requirement by next fall.”

CORRECTION: Language concerning the comparison between the Class of 2025 and Class of 2024 applicant pool was corrected April 15, 2020, to reflect the difference between the two groups.