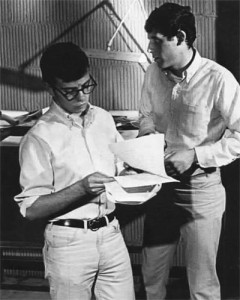 Image Contributor
Pat Quinn (right) served as THE HOYA’s sports editor from 1968-1970. He was sworn in as governor of Illinois yesterday.

After nearly two months of scandal, the state of Illinois welcomed its new governor, former Lieutenant Governor Pat Quinn (SFS ’71). Yesterday, former Governor Rod Blagojevich was convicted by the state senate of abusing his power by attempting to sell President Barack Obama’s former Senate seat to the highest bidder. Blagojevich was removed from office in a 59 to 0 vote by the Illinois State Senate and has been barred from ever holding public office in the state again.

Quinn took the oath of office at 5:40 p.m., an hour after Blagojevich’s conviction. After the oath, he delivered a short speech to the cheering members of Illinois’ House of Representatives.

“If all of us are cheerful, earnest, frank and honest, we can achieve great things for the land of Lincoln,” Quinn said.

Quinn graduated from Georgetown’s School of Foreign Service in 1971. During his time at Georgetown, he served as HOYA sports editor from 1968 to 1970.

Upon graduation, Quinn worked on Former Illinois Governor Dan Walker’s campaign. In 1991 he served as Illinois state treasurer and was elected as the state’s lieutenant governor under Blagojevich in 2003.

Blagojevich did not attend the first three days of his senate trial and instead flew to New York where he appeared on Fox News, “The View,”Larry King Live,” and various other news, television and radio programs. Blagojevich pled his case to the public on the shows, claiming that by not appearing before a jury, he was not being given a fair trial.

“I’m not even getting a fair trial. They’re just hanging me,” Blagojevich said in a press conference.

Yesterday, Blagojevich flew back to Chicago from New York to give the closing statement in his trial. In the speech, which lasted over 45 minutes, Blagojevich claimed that he was innocent and that prosecutors did not have a solid case against him.

“I did a lot of things that were mostly right. . ” he said in his closing statement. “Impeachments are very rare and they’re designed to be that way. That’s why I stand before you in a very unique and lonely place. You’re not supposed to just throw the will of the people out unless you show wrongdoing. You haven’t shown wrongdoing in this trial.”

Quinn has already been hard-at-work distancing himself from the former governor. In a December interview with MSNBC, Quinn told David Gregory that, although he had supported Blagojevich through a 2006 ethics scandal on suspect hiring practices, the relationship between the two politicians had changed significantly since then.

“I think after the election of 2006 through 2007 and 2008 things got worse and worse. The governor announced [publicly] that I was not part of his administration,” Quinn said.

Quinn also added that he had not spoken to the governor since August of 2007, despite Blagojevich’s position as his immediate superior.

Check www.thehoya.com for more updates on this story.