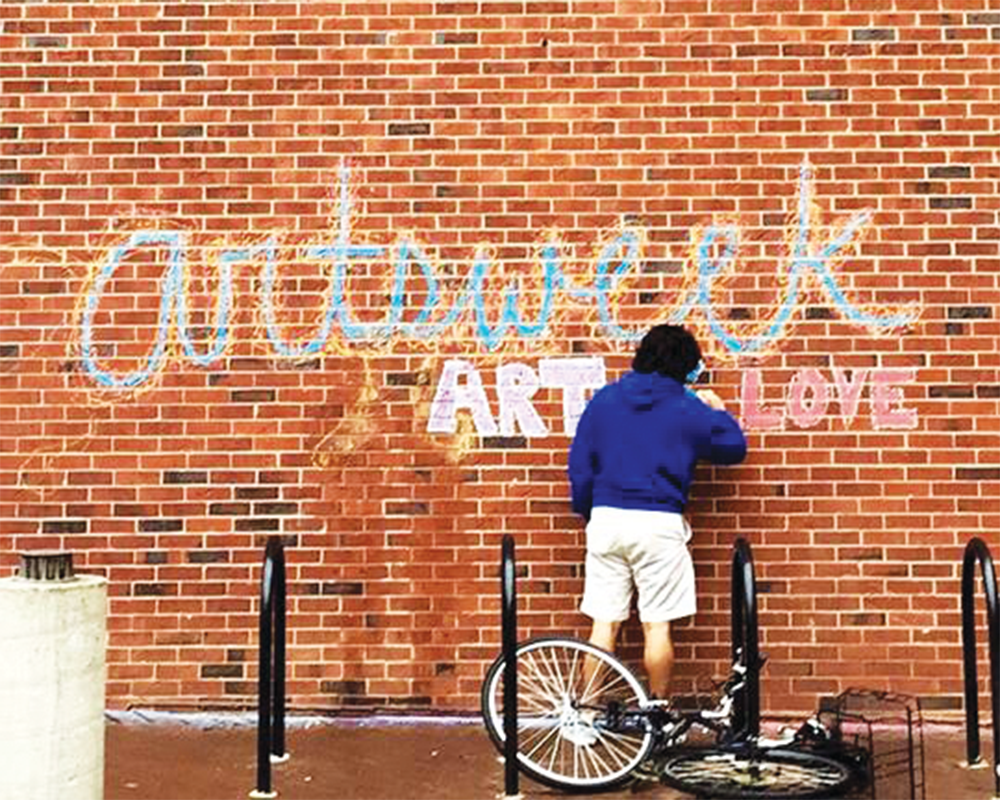 As students passed through the weekly farmer’s market on Wednesday afternoon, many were happily surprised to find themselves serenaded by Georgetown a cappella groups. Watching the Saxatones and Superfood light up Red Square reminded marketgoers of just how talented their peers and classmates were, while also highlighting the importance of engaging with the arts on campus.

This pop-up performance was in fact one of the many events packed into GU Arts Week, a yearly Georgetown tradition first established in 2014. From March 27 to April 1, students have the opportunity to attend a number of artistic events, including gallery viewings, open mics, musical and theatrical performances, rehearsals, film screenings and student-led conversations about art. Highlights of the week include productions hosted by Nomadic Theatre and the Black Theatre Ensemble at the Village C theatre, and Spring Sing, an a cappella concert hosted by the Georgetown Saxatones and Superfood at Gaston Hall.

“All of our events are open to the general public. We try to make events that equally represent all the different art forms in some way so that everyone can see what they want and then dive into it,” Former GUSA Arts Policy Chair and Arts Week Head Coordinator Katherine Rosengarten said. “There’s a little taste of everything, but each event is also catered to being open to everyone, so anyone can come in. It’s an open door, an open invitation.”

Through the sponsorship of the GUSA Arts Policy Team, the Department of Performing Arts, the Corp, GUSA Fund and student contributions through the Student Activities Fee, Arts Week continues to grow and expand, reaching broader audiences.

“I just hope that it keeps happening. The first one was a smaller voice. It wasn’t as loud. I took that vision with the chance of being GUSA Arts Policy Team Chair, which gave us so much funding and such a larger audience,” Rosengarten said.

“I think that, with education and with the arts, it’s definitely important to have both sides because, with education, of course, there’s all the practical applications, but, in addition to those practical applications, you are expanding your mind and just bettering yourself as a human,” Don B. Murphy One Act Festival Assistant Stage Manager and Mask and Bauble member Rachel Lock (COL ‘20) said.

The integration of the arts with education reflects Georgetown’s emphasis on cura personalis, or care of the whole person. Students have celebrated this week’s welcoming and dynamic spirit.

“GU Arts Week is amazing, because it shows people on campus who aren’t necessarily part of the arts community just how flourishing and fabulous we are. It shows that Georgetown students aren’t one-trick ponies. We are truly involved in all sorts of activities,” Gracenotes member Elizabeth Kurdyla (COL ‘17) said. “Engagement with the arts is essential to education. My involvement with music has helped me think about challenges in new ways, engage with different points of view and flex my creative muscles.”

Conversation surrounding the arts and arts education has become particularly relevant in light of President Donald Trump’s first federal budget proposal, which eliminates the National Endowment for the Arts and National Endowment for the Humanities. The NEA is an independent federal agency that provides funding for noteworthy artistic projects. Among its historical highlights have been the provision of its first grant to the American Ballet Theatre in 1965, its selection of the design for the Vietnam Veterans Memorial in 1980 and its creation of the NEA Arts Journalism Institutes in 2004 to promote press coverage of the arts.

“Art is always political, and, when politics enter so brazenly into the macroscopic art world, it’s imperative for everyone to take up the standard to take upon themselves the task of looking into what they can do, whether it’s protesting, … donating incrementally to arts programs and non-profits and locally to DC’s art scene … or even just [going] to as many art performances as you can in D.C.” Rosengarten said.

Georgetown’s promotion of the arts demonstrates an increasing national awareness about its collective importance. Arts Week, in particular, embodies the much-needed revival of the relationship between arts and society.

“There’s a beautiful quote etched into a wall of the Kennedy Center by JFK about his aspiration for the United States to become a country in which artistic achievements will have the same societal value and investment as business investments, and doing so will challenge American artists to excel in artistry and creativity,” Rosengarten said. “Art is essential in times like this.”

Ultimately, Arts Week seeks to provide students with a relaxed, fun environment in which to express themselves and break from the routine.

“Our hope is that everyone will come away a little bit happier, a little bit less stressed and a little more colorful. That’s ultimately what art is for, it’s cathartic,” Rosengarten said. “I’ve heard a lot of laughter, I’ve heard a lot of ‘Oh my gosh my hands are messy.’ I’ve heard a lot of pretensions and projections of perfection breaking down inside people. It’s been an amazing response, and our hope is to keep the energy up so we can keep that invitation going strong and in return, get more of those smiles, messy hands and even inquiries to join into this effort.”