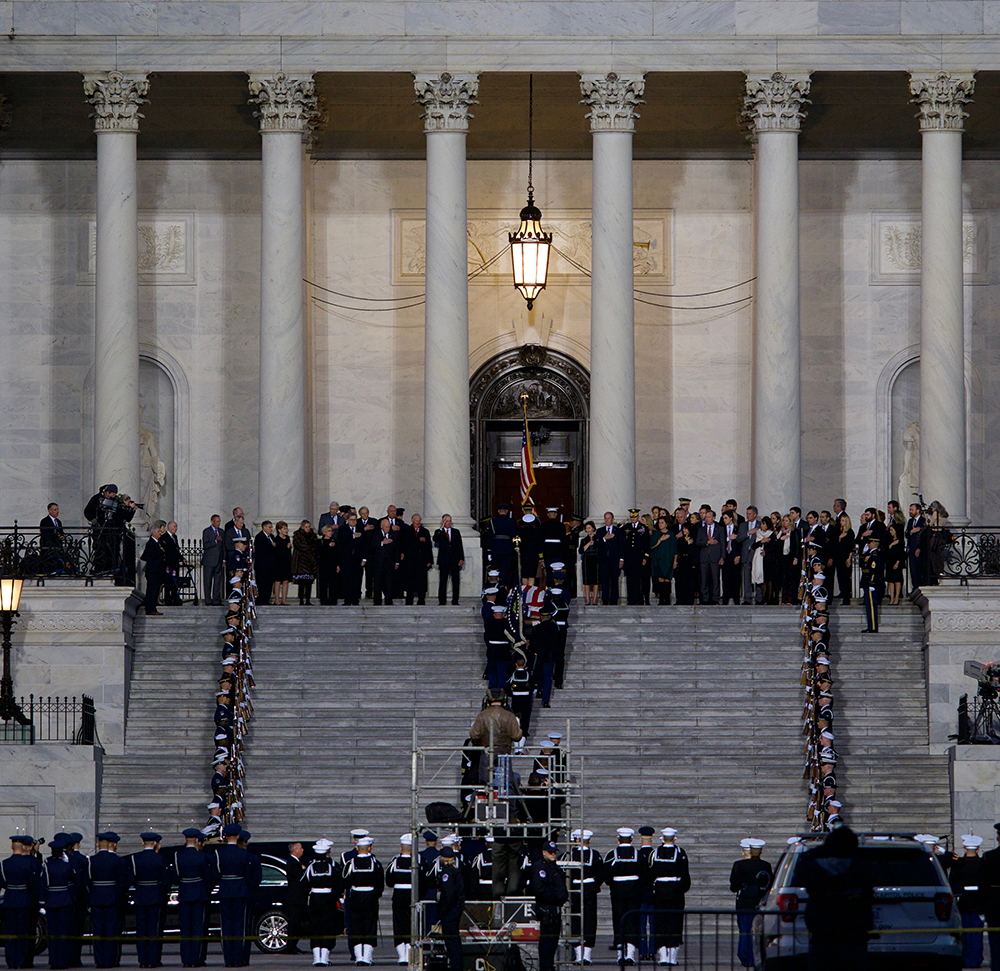 Georgetown University students, faculty and prominent alumni celebrated President George H.W. Bush’s legacy of prioritizing lifelong service to his country over partisan politics after he died Nov. 30 at the age of 94.

Bush, the 41st president of the United States, died at his home in Houston, after months of failing health, less than a year after his wife Barbara Bush died in April. The exact cause of death was not immediately announced, but Bush was diagnosed with a form of Parkinson’s disease in 2012 and had undergone several health issues and hospitalizations since.

Bush’s casket was transported Monday to Washington, D.C., where he lied in state in the Capitol rotunda until Wednesday, which was declared a national day of mourning by President Donald Trump.

Students and professors alike commented on the example Bush set for young people across the United States throughout his nearly 30-year career in government.

“He was a good man, a decent man who understood the importance of public service, who made some mistakes and was willing to take actions outside what ought to have been his values to win,” Dionne said in an interview with The Hoya.

Bush valued cooperation even with colleagues who did not share his views, an attitude that is noticeably absent in D.C.’s current political climate, host of the Georgetown University Institute of Politics and Public Service’s podcast “Fly on the Wall” Alec Camhi (COL ’20) said.

“You heard him talk a lot about how he could be friends with people you disagree with and politics doesn’t have to be mean and nasty, and I think that was kind of a fundamental core belief of his,” Camhi said.

Despite losing his re-election bid to Bill Clinton (SFS ’68) in 1992, Bush maintained a commitment to unity after his defeat, surprising many by leaving then-President-elect Clinton a parting letter of collegial support on Inauguration Day in 1993. The pair developed a deep friendship over the years, accentuated by close collaboration on humanitarian issues, according to presidential biographer Jon Meacham, who published a biography of Bush in 2015.

Bush was not only a remarkable public servant, but also a friend of the entire Clinton family, Clinton wrote in a statement released Dec. 1.

“From the moment I met him as a young governor invited to his home in Kennebunkport, I was struck by the kindness he showed to Chelsea, by his innate and genuine decency, and by his devotion to Barbara, his children, and their growing brood,” Clinton wrote. “I am profoundly grateful for every minute I spent with President Bush and will always hold our friendship as one of my life’s greatest gifts.”

Dionne, who became more familiar with Bush while covering the 1988 presidential election for The New York Times, said Bush and leaders of his generation did not like the divisive nature of politicking practiced by U.S. leaders in recent years and instead focused their efforts on serving the nation.

“There was an ethic of service in the elite that existed that is weaker now, and he represents that old ethic of service,” Dionne said. “Whatever my political disagreements, I really, really admire that about him.”

“It is deeply saddening to see him go, but our nation can take great joy in reflecting on his lifetime of service,” Lyons wrote in an email to The Hoya. “It’s my hope that our nation’s leaders, regardless of partisan beliefs, will take the time to reflect on his service and apply lessons from his life going forward into the next Congress.”

During his presidency, Bush oversaw the fall of the Berlin Wall and led the country through the end of the Cold War. Following Iraq’s 1990 invasion of Kuwait, which began the six-monthlong First Gulf War, Bush organized an international coalition to fight Iraqi forces and expel them from Kuwait. The Bush administration also continued Ronald Reagan’s efforts to negotiate the North American Free Trade Agreement, which was eventually signed into law by Clinton.

Following Bush’s death Friday night, messages of condolence and support flooded in from figures on both sides of the aisle commemorating his steadfast leadership and dedication to public service.

“Ready to give his life as a young Navy Pilot who trained at Navy Pier in Chicago, President Bush devoted his entire life to America. He was humble, caring, and principled, qualities we venerate in a President,” Durbin wrote.

Georgetown is flying the U.S. flag located on its main campus at half-staff for the standard 30-day period following Bush’s death in accordance with U.S. flag code, according to a university spokesperson.

Following a memorial service at the Washington National Cathedral on Wednesday, Bush was transported back to Houston for a second funeral service, which will occur on Thursday. He will be buried on the grounds of his presidential library in Texas alongside his late wife Barbara and late daughter Robin.