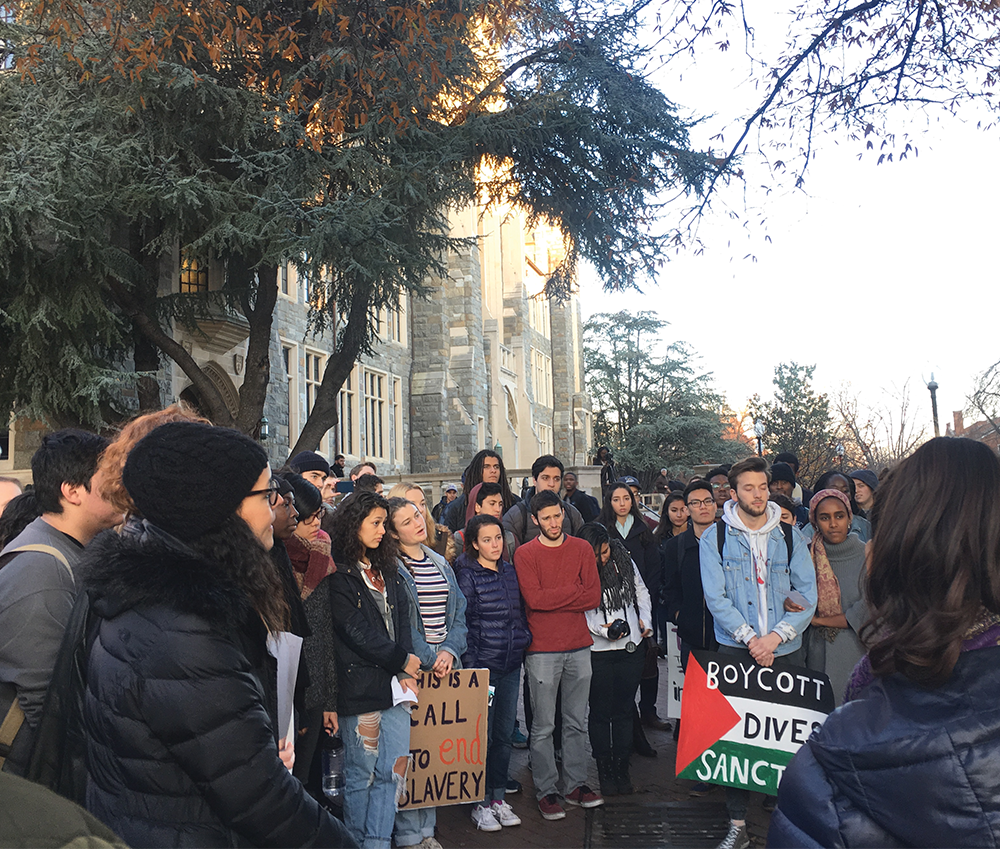 GU F.R.E.E, which has been endorsed by 17 student groups, submitted a letter Dec. 7 to University President John J. DeGioia demanding that the university divest from investments in private prisons and companies that contribute to the “occupation of Palestine.”

The coalition is endorsed by groups advocating for underrepresented populations and groups that support Palestinian independence from Israel, including the Georgetown chapter of the NAACP as well as GU Students for Justice in Palestine.

The Jewish Student Alliance, J Street U Georgetown and the Georgetown Israel Alliance are not members of the coalition.

Chief of Staff Joseph Ferrara said in an email to GU F.R.E.E. provided to The Hoya that the university’s standard practice is to not disclose its investments.

GU F.R.E.E. said the campaign will continue to press for a list of investments.

“The administration’s refusal to sign our letter indicates to us that we have some sort of relationship with the named companies and as such, we will move forward with our campaign,” GU F.R.E.E. wrote in an email to The Hoya.

Senior Director for Strategic Communications Rachel Pugh said the university’s Committee on Investments and Social Responsibility, which advises the university on its investments, is considering the demands listed in the group’s December letter.

J Street U Georgetown said in a statement that “Boycott, Divestment, Sanctions” movements like GU F.R.E.E’s are ineffective in achieving a two-state solution, its preferred solution to the conflict between Palestine and Israel. J Street instead called for constructive criticism of Israeli policy rather than calls for taking away funding for Israeli companies.

“We do not believe that B.D.S. movements are an effective or helpful way to to end the conflict and reach a peaceful resolution,” the statement reads. “We encourage positive reinvestment into the Palestinian economy and civil society and diplomatic negotiation as a means to achieve a lasting peace agreement.”

GU F.R.E.E. has said it did not plan on inviting J Street U Georgetown.

J Street U’s statement, however, noted that those involved with GU F.R.E.E. have been willing to discuss their position with student groups opposed to their message. The group affirmed their support for Palestinian rights.

“We have met with individuals involved in the GU FREE campaign and appreciate their willingness to explain their position and support the safety of all students on campus,” the statement read.

GU F.R.E.E. launched an official website and campaign Wednesday. The group plans to raise awareness of the issues affecting underrepresented populations as it pushes the university to pursue a more transparent endowment, according to the group.

“We intend to raise awareness and constructive conversation surrounding both issues to problematize the normalization of these human rights violations,” the statement reads. “We plan to put pressure on the University until it recognizes the glaring contradictions of our Jesuit values and subsidization of state violence via our investment practices.”