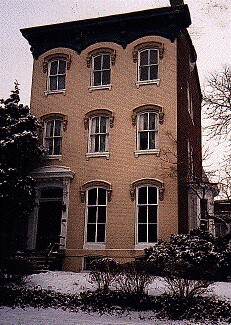 A Georgetown University graduate and officer of the Delta Phi Epsilon (DPE) fraternity is expected to go to trial in 2023 for misusing public benefit funds intended for School of Foreign Service (SFS) student scholarships.

Until August 2021, Boyle served as the officer of both DPE — a fraternity established to connect Georgetown men interested in international diplomacy — and the DPE Foundation for Foreign Service Education, a separate nonprofit charity created to financially support students.

James Abely (SFS ’88), a DPE brother, said Boyle’s use of the foundation’s money to buy the property was an act of theft from Georgetown students.

“I think the truth has to come out,” Abely told The Hoya. “I think it has to come out at Georgetown, because I think the Georgetown community was robbed. These are funds that really should have gone to a scholarship at the School of Foreign Service.”

Abely is one of over 450 donors who have financially contributed to the foundation and said he was under the impression that his $500 donation would go toward supporting the education of SFS students.

To qualify as a 501(c)(3) nonprofit, the foundation needed to fulfill the objectives it committed to when applying for tax-exempt status, according to documents obtained by The Hoya.

“The DPE’s Foundation’s IRS assigned (c)(3) tax-exempt purpose has been ‘when fully operational, to maintain a library regarding the diplomatic service and careers in such service, to sponsor lectures, debates and other educational activities related to international affairs [and that] ultimately, the organization hopes to be able to offer scholarships to students,’” the document reads.

Instead, Boyle spent $150,000 of the foundation’s funds as its treasurer to purchase his Georgetown residence at 1245 34th St. NW, which is now valued at more than $1.1 million, according to D.C. Attorney General Karl Racine’s civil complaint.

Boyle said the foundation paid $150,000 toward the down payment of his home, according to documents from the Jan. 13 deposition that were obtained by The Hoya.

Boyle’s defense team claimed that the foundation and Boyle jointly purchased 1245 34th St. NW with the intention that the property would serve as a real estate investment and storage facility for DPE, according to documents obtained by The Hoya.

Boyle said the foundation benefited from using funds to pay for his personal residence because he maintained the property as it appreciated in value.

“The exchange for my living there for free, I will pay all the utility bills, all the repair costs, all of the insurance premiums and stuff like that, and I will manage the property and make sure there’s no parties terrorizing this house,” Boyle told The Hoya. “I will do this in exchange for being allowed there.”

However, Matini found that Boyle failed to fulfill his obligation to use the property for the foundation’s nonprofit, public purpose, instead providing him personal benefit as his primary residence for over 30 years.

Boyle said Matini ruled improperly, as 41 defense exhibits were excluded from consideration in her judgment. The defense was unable to submit these documents on time because of his attorney’s health complications, Boyle said.

Matini has since denied his applications for reconsideration twice.

Matini also found Boyle responsible for mishandling DPE’s finances by selling the chapter house in the Georgetown neighborhood under market value, against fraternity protocol and in violation of the District’s Nonprofit Corporation Act.

On Feb. 29, 2020, 45 DPE members and 303 initiates met to vote on the future of their chapter house, known as the Alpha House. The majority of the fraternity had agreed to sell the house for as much as possible to generate funds for the organization, according to the fraternity’s meeting minutes obtained by The Hoya.

After the vote, Boyle donated Alpha House to the foundation without fraternity members’ authorization and then sold the house for $2.65 million, even though the property was appraised at $4.25 million. The fraternity did not receive the proceeds of this sale, despite the fact that Alpha House was the organization’s primary asset.

Chris Christon (SFS ’67), a DPE brother, said Boyle’s alleged overhaul of the fraternity’s consensus does not reflect the values of DPE.

“Alpha Chapter’s 40 year transition from a student governed and managed fraternity to an authoritarian club directed and managed by a single alumnus bred the chaos uncovered by this court case and other events over the past 4-5 years,” Christon wrote to The Hoya.

DPE is not officially affiliated with Georgetown University, according to a university spokesperson.

“Georgetown University does not recognize or formally support any Greek organizations, including Delta Phi Epsilon,” a spokesperson wrote to The Hoya.

Matini’s ruling did not specify any restitution for Boyle, but DPE brother Mark Zunic (MSB ’87) said he would like to see the court order Boyle to repay the foundation for the amount of funds used to buy his home, pending trial.

“I think the only thing that can come out of it might be some sort of monetary fine against him, and I hope it’s enough so that it really hurts,” Zunic told The Hoya. “As much as he stole, he should be forced to give back.”

DPE brother Nicholas Lamberti (SFS ’74) said he hopes the Georgetown community can learn from the wrongdoings of the case to ensure such corruption does not occur again.

“This DPE litigation should serve as a precautionary tale to GU undergraduates as how a so-called non profit organization can be manipulated into serving no one but the organization’s officers,” Lamberti wrote to The Hoya.

Zunic said the lawsuit has tainted his memories of DPE, a highlight of his time at Georgetown.

“A big part of my experience was at the Alpha house,” Zunic said. “For me, that was Georgetown. Sitting on a 20-year-old velvet couch that stunk of beer was what made me smile when I think about Georgetown. And all of that is just a little dirtier now.”