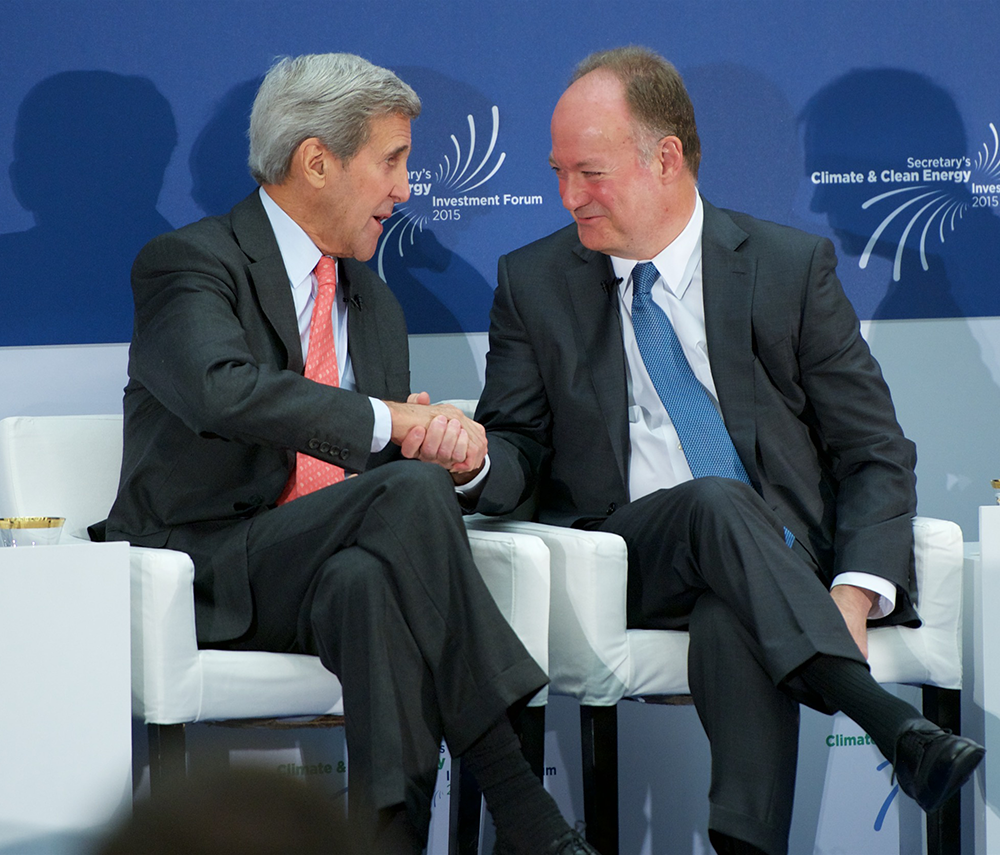 Georgetown and Google co-hosted Secretary of State John Kerry’s Climate and Clean Energy Investment Forum on Oct. 20 and 21, gathering federal officials and executives from both the public and private sectors to discuss clean energy initiatives nationwide.

Conference highlights included a fireside chat between Kerry and University President John J. DeGioia at the State Department on Tuesday and a keynote address from Secretary of Energy Ernest Moniz in Lohrfink Auditorium at the McDonough School of Business on Wednesday.

Kerry opened the two-day forum with remarks Tuesday morning, citing examples of climate change, including that 19 of the hottest 20 years in history have occurred in the past two decades. He called on participants to use the forum to collaborate and think of long-term solutions.

“The solution to this particular challenge — climate change — is actually just as simple as the realization that it is the challenge that it is,” Kerry said. “We have investment leaders here today, representing trillions of dollars of assets under management, focused, not on abstract discussions, but on real, tangible initiatives that will actually bring about a clean and sustainable future.”

Kerry spoke about the United Nations Climate Change Conference that will be held in Paris this December as a goal for international progress.

Throughout his speech, Kerry continually stressed the economic benefits of addressing climate change.

“The real kicker is that innovations in clean energy and energy efficiency is that they don’t just stave off the worst impacts of climate change. They’re also going to grow our economies and employ our communities,” Kerry said.

Mitchell specifically asked DeGioia about the impact of Pope Francis’ June encyclical on the university’s efforts in the area of climate change.

“It did not disappoint. It truly was an extraordinary moment and had served already to inspire us to try to determine how could we, as a university community, respond differently in this moment,” DeGioia said. “Any time we get a little bit self-satisfied or complacent, we just have to take a look at that encyclical and realize there is a significant gap between our current reality, the way we are living, and what he is asking us to do.”

DeGioia cited the Georgetown Environment Initiative as a main factor of the university’s efforts since its November 2012 launch. Funded by a $20 million anonymous donation, the initiative encourages environmental study across Georgetown’s main, medical and law campuses.

“What we’ve tried to do with the Georgetown Environment Initiative … was harness the power of our institution to look at the integration of policy, law, business, science and try to make the kinds of contributions that universities can make to this dialogue,” DeGioia said.

In his keynote address, Moniz echoed Kerry’s emphasis on the upcoming Paris conference. He cited the recent climate deal between the United States and China as evidence that upcoming conference will result in positive progress.

“I do think it’s fair to say that the optimism of our accomplishing something substantial in Paris is significantly greater than it was a year ago,” Moniz said.

Additionally, Moniz touched on both the short-term and long-term goals for effective climate action.

“We will have to keep squeezing down on carbon emissions, on greenhouse gas emissions in general,” Moniz said. “And that’s the time period where a word I will use a lot today, innovation, is going to be absolutely central to meeting not just long-term goals, 10 or 15 years, but also continuing progress that we will need to make beyond that.”

He specifically referenced the Advanced Research Projects Agency-Energy that promotes and funds renewable energy and green technologies and spoke about the department’s broad approach to finding clean energy options.

“Our view has been called ‘all of the above.’ Our view is, the goal is low carbon in the energy sector. We believe that there is not one low-carbon solution,” Moniz said. “So what we believe is that our job is to enable any approach to low carbon to compete for a place in the marketplace.”

Moniz concluded the address emphasizing that Paris was not the end point for seeking new, environmentally secure energy solutions.

“So those are some of the things on our minds as we are heading into Paris,” Moniz said. “But, as you can see, we will be really thinking hard about the path from Paris, which is when we really have to work hard to meet our goals in 2025 and beyond.”