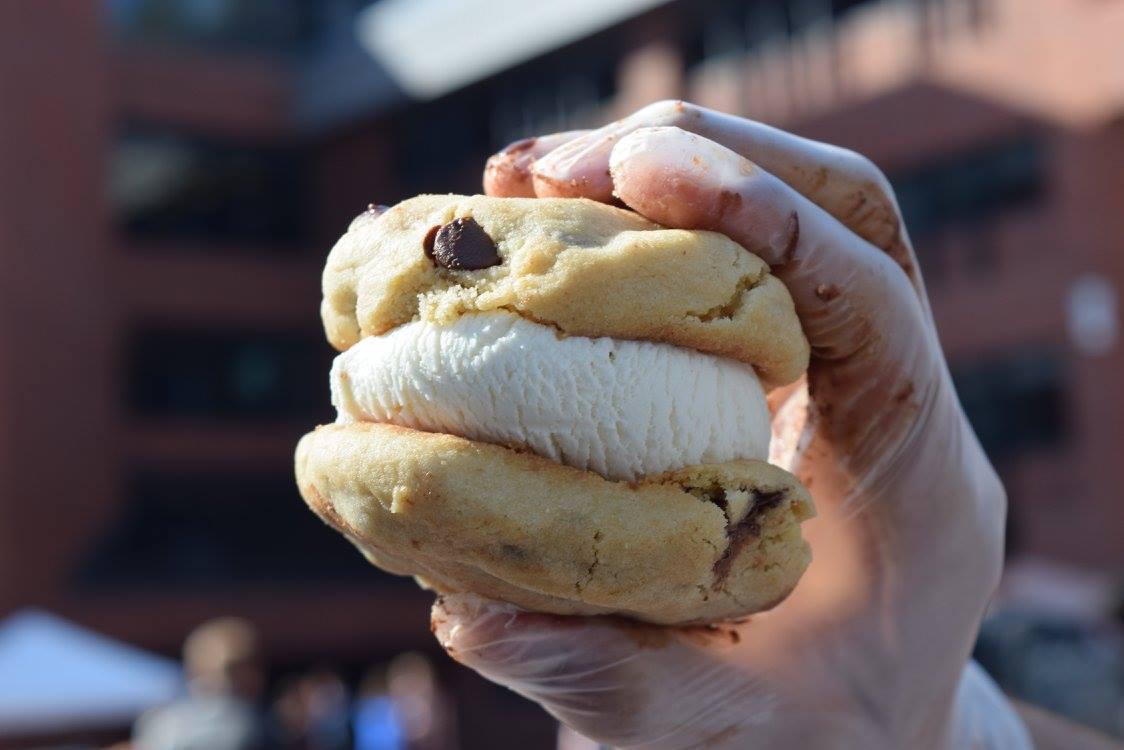 Co-founded by Molham Krayem (MSB ’17) and Owais Bukhari (GRD ’15) during the spring, Melties has been selling its ice cream creations on campus since March and has continuously gained traction, becoming profitable within two months of operation.

Krayem and Bukhari were inspired to launch Melties when the two friends were looking for the perfect dessert on campus to no avail. As a result, they started making their own. Krayem explained that he and Bukhari went through countless trials and gathered as much feedback as they could before settling on what they saw as the perfect recipe.

The Melties product is familiar concept: Currently the sandwich consists of two homemade chocolate chip cookies, between which are the customers’ choice of chocolate or vanilla ice cream. According to Krayem, high-quality ingredients, in addition to a secret recipe, makes Melties’ product unique.

“The things that make our ice cream cookie sandwiches stand out are our secret cookie recipe, exclusive deal with a premier D.C. ice cream shop, which is where we get our ice cream,” Krayem said.

In addition, the ice cream sandwiches are freshly prepared, further enhancing their quality and flavor, according to Krayem.

“We warm up our cookies our mini conveyor oven on the spot and the ice cream sandwiches are to order, so they are made right there right in front of you,” Krayem said.

Krayem said the ice cream sandwiches themselves are not the only crucial part of the business. Melties’ 11 employees are all current Georgetown students and are vital to the success of the startup.

“My team is phenomenal. I don’t know where I’d be without them, to be honest,” Krayem said. “They range from — when we started — freshman to seniors across all different schools.”

Krayem stressed customer service as a key focus of Melties.

“Our motto and mission is to literally — it’s three words — ‘make their day,’” Krayem said. “It is what we stand for.”

The business has earned a competitive semester-long place at the GU Farmers Market. The GU Farmers Market board assesses potential vendors on the basis of the locality of their ingredients, the diversity they add to the market and their contributions to the Georgetown community.

According to Abraham Fraifeld (SFS ’17), a board member of the GU Farmers Market, Melties exemplifies all these characteristics in its connection to the campus community. Farmers Market vendors are also required to have 60 percent of their ingredients sourced from within 260 miles of the D.C. area, both qualifications that Melties meets.

Fraifeld said Melties is a special instance of a student-run business that is a good fit for the Farmers Market.

Krayem plans to continue his involvement with Melties after graduation.

“After I leave, Melties will still be running on campus; the rest of the team will be managing. So I won’t be CEO, I’ll be sort of an advisor,” Krayem said. “Outside of campus, we’ll probably expand into a store front or a food truck in 2018.”

Melties has also set up its stand at a variety of other on-campus events. For instance, the McDonough School of Business recently hired Melties to cater an ice cream social celebrating its 60th anniversary.

Abby Littleton (NHS ’18), who visited Melties in the spring said the variety of products is one of its major selling points.

“The fact that there’s variety is very welcoming to those of us who like to change it up,” Littleton said. “I prefer the chocolate ice cream in the middle.”

Meredith Forsyth (SFS ’19) considers herself one of Melties’ many fans.

“I really loved Melties ice cream sandwiches when I tried them at the Farmers Market last semester,” Forsyth said. “The combination of warm cookies and ice cream, with a bunch of great flavor combos, was the perfect snack on a hot day.”