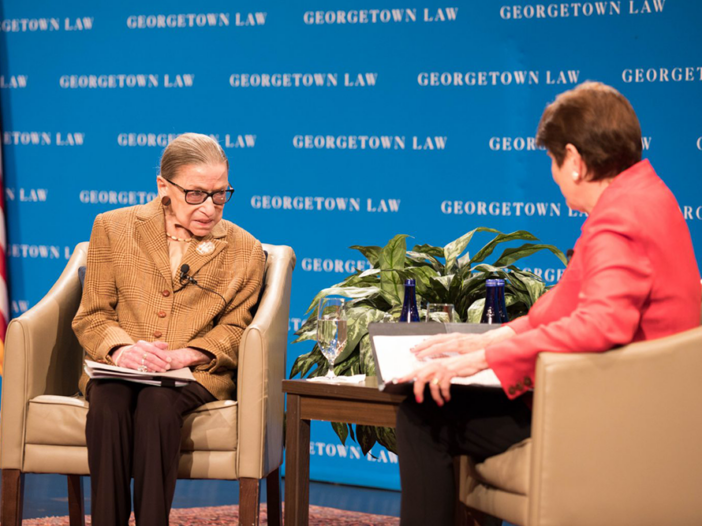 Ruth Bader Ginsburg may have been a towering legal and cultural icon, but at Georgetown University, she was also admired as a frequent visitor and mentor to students — and as “Marty’s wife,” the loving life partner of the late Georgetown University Law Center professor Martin Ginsburg.

The event was moderated by Law Center Dean William Treanor and featured reflections from several Georgetown community members with ties to Ginsburg: professors Mary Hartnett and Wendy Williams, co-authors of her authorized biography; professors Dori Bernstein and Mitt Regan, two of her former law clerks; and Judges M. Margaret McKeown (LAW ’75) and Nina Pillard, two of her colleagues on the federal bench.

Pillard, a former Georgetown Law professor, who has often been compared to Ginsburg and mentioned as a potential future Supreme Court justice, said Ginsburg’s life had served as an inspiration for her own career.

“She was an incredible example,” Pillard said. “She’s gone, and she is irreplaceable. We are bereft.”

Each speaker took turns recalling and sharing their fond personal memories of Ginsburg: from weekly calls to Bernstein when she was hospitalized mid-clerkship to assenting to participate in a school project for Regan’s middle-school daughter.

Hartnett remembered how Ginsburg came to a class of hers to watch former President Barack Obama’s farewell address with her students and said it was a testament to Ginsburg’s dedication to working with students.

“Justice Ginsburg so loved students,” Hartnett said. “Her students, our students, all students, which is why she found so much time for them, for you.”

The speakers also discussed Ginsburg’s lasting love of education, stemming from her roots in academia. Ginsburg worked as a law professor at Rutgers Law School from 1963 to 1972 before moving to Columbia Law School where she became the first tenured woman at the school.

After being appointed to the U.S. Court of Appeals District of Columbia Circuit by President Jimmy Carter in 1980, Ginsburg continued to find time for students by speaking at the Law Center. Treanor expressed his gratitude for her service to Georgetown, recounting the iconic jurist’s more than two dozen addresses on campus over four decades. She last spoke on campus in February to commemorate the passage of the 19th Amendment to the Constitution, which granted women the right to vote.

“Even after she went on the bench, she remained a teacher,” Treanor said. “And we at Georgetown, as a community, benefited immeasurably from her commitment to teaching the next generation.”

Many of the professors who participated also described the devoted partnership shared between the justice and their former colleague Martin Ginsburg, who served as a faculty member at Georgetown Law for 30 years until his death in 2010. Martin Ginsburg was known as a fierce advocate for his wife, pushing for her appointment to the D.C. Circuit Court of Appeals and later to the Supreme Court.

“How can we carry on the legacy of Ruth Bader Ginsburg?” Pillard said. “I would say that all of you know a woman who could benefit from the kind of love and support that Marty gave to Ruth. It’s on you to honor the Ginsburgs by being for those women their Martys.”

The justice’s former clerks remembered her as an exacting boss with high expectations and, as Regan put it, a “meticulous — some might say compulsive — attention to detail.” But, they agreed, the payoff was enormous. Bernstein credited Ginsburg with transforming her legal career and offering an example that would guide her for decades afterward.

“It’s almost like when you’re in therapy, and your therapist is always in your head,” Bernstein said. “When you clerk for someone like Justice Ginsburg, she’s in your head for life.”

As the event came to a close, Treanor held back tears while sounding the hopeful note he said Ginsburg would have wanted to be shared.

“Challenges are real, and losses are inevitable,” he said. “But we should learn from Justice Ginsburg that faith in the future will sustain us and that faith will be rewarded.”