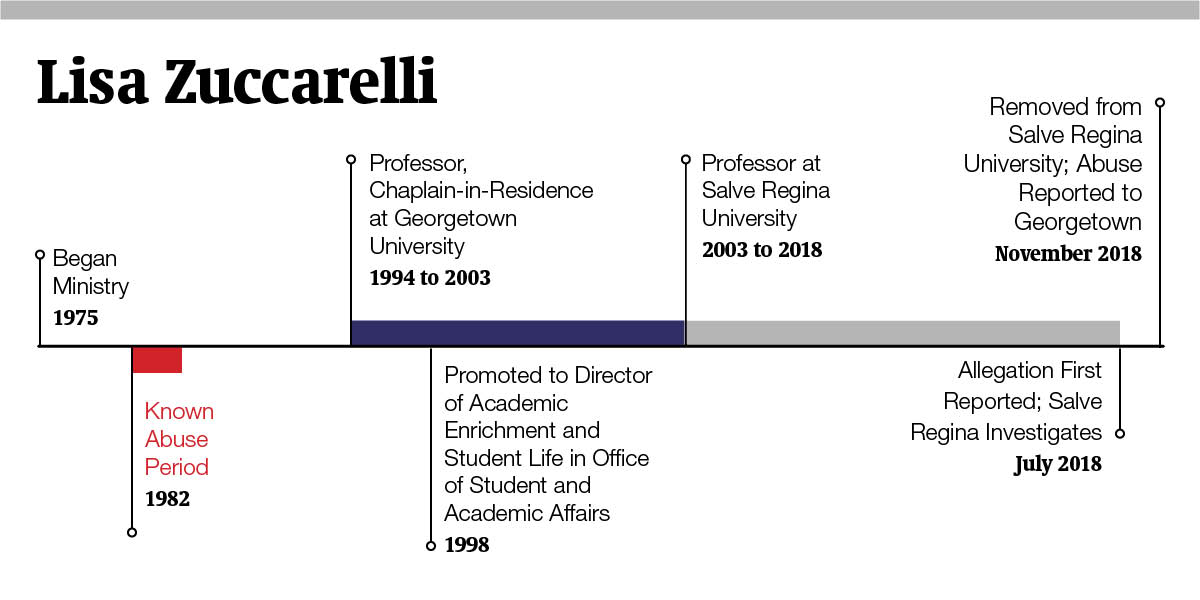 On Nov. 27, 2018, Georgetown University was notified that Sr. Lisa Zuccarelli, a former associate dean, professor and chaplain-in-residence at the university, had been credibly accused of sexual abusing a minor 30 years earlier. Georgetown has not publicly acknowledged the allegation.

Zuccarelli began her ministry in 1975 with the Dominican Sisters of Peace, a women’s Catholic order. She taught at Georgetown’s School of Nursing from 1995 to 1999 and served as a chaplain-in-residence in St. Mary’s Hall and Darnall Hall from 1996 until 2002, according to university archival material. In 1998, Zuccarelli was named director of academic enrichment and student life in the newly created Office of Student and Academic Affairs, a position she held until she left Georgetown in 2003.

In her administrative role, Zuccarelli, now 65, worked with students often and effectively, according to Dorrie Fontaine, Zuccarelli’s supervisor at the time and the current dean of the School of Nursing at the University of Virginia.

“She and I both took care of students, whether it was academically, whether it was emotionally, when they had issues and concerns — we did a wonderful job taking great care of our students,” Fontaine said in a phone interview with The Hoya. “These were nursing students, and they had a passion for helping and caring for others.”

On July 27, 2018, the Dominican Sisters of Peace chapter in Columbus, Ohio, received a letter from one of Zuccarelli’s former students at Fisher Catholic High School in Lancaster, Ohio, reporting that Zuccarelli, then a teacher there, sexually abused her in 1982.

The letter, which the Sisters of Peace reported to the Lancaster Police Department within 24 hours, did not include details of Zuccarelli’s misconduct, according to LPD Lieutenant Nicholas Snyder.

“The letter is more about, ‘This is how it affected me,’” Snyder said in a phone interview with The Hoya. “This was the emotional response. This is, ‘How it has impacted me going on in life.’”

Georgetown was notified of accusations against Zuccarelli on Nov. 27 after an outside investigation deemed the accusations credible, according to an interview with Alice Black, the Sisters of Peace director of communications. A university spokesperson confirmed that Georgetown learned of the allegations in November.

Upon interviewing, the survivor informed the LPD that Zuccarelli made an unwanted sexual advance toward her after the survivor sought Zuccarelli’s help at St. Mary’s Convent in Lancaster according to Snyder.

“She was in the convent to seek some counsel because she was not getting along with her parents,” Snyder said. “She said her father was abusive and that upon receiving some counselling and talking to her, that is when the alleged perpetrator made advances towards her.”

“We consider this conduct reprehensible, and we are deeply sorry for the pain it has caused,” Twohill wrote. “We are doing all that we can to support the healing of all involved.”

However, Zuccarelli is still an official member of the Sisters of Peace, Black said.

No other survivors have accused Zuccarelli of sexual misconduct, though the Sisters of Peace have encouraged any others to come forward, according to Black.

On July 27, the Sisters of Peace brought the allegations to Salve Regina University in Newport, R.I., where Zuccarelli worked as an associate biology professor and chair of the chemistry department between 2003 and 2018. Salve Regina immediately placed Zuccarelli on an leave of absence prior to the fall semester. Salve Regina cooperated with the Buckingham, Doolittle & Burroughs investigation, according to Salve Regina’s statement. Zuccarelli resigned in early November.

“The Congregation of the Dominican Sisters of Peace and Salve Regina jointly conducted an independent investigation in full cooperation with authorities, while also balancing the needs of transparency and respectful privacy for the victim,” the statement said.

Salve Regina’s investigation did not find any evidence suggesting that Zuccarelli acted inappropriately toward any Salve Regina student on faculty member during her tenure at the university, according to Salve Regina’s statement.

Upon notification of the investigation into Zuccarelli, Georgetown conducted an internal review of records and did not identify allegations of abuse from her time at the university, according to a university spokesperson.