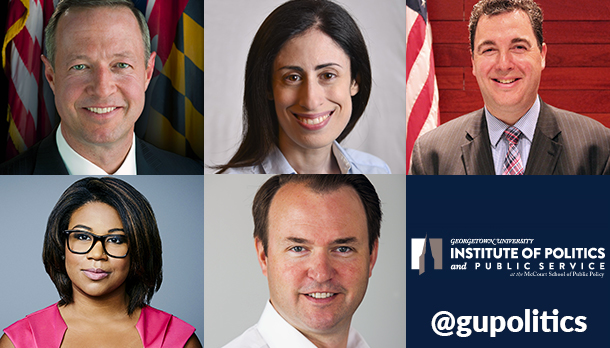 Georgetown Institute of Politics and Public Service unveiled its newest class of fellows Wednesday, a group that is comprised of figures at the forefront of politics and media.

GU Politics Executive Director Mo Elleithee (SFS ’94) said the program strove to recruit a dynamic and diverse cohort for its third class of fellows since the program’s launch last fall.

“With a former presidential candidate and governor, two top political operatives from both sides of the aisle, and two leading political journalists, we think we hit it out of the park with our fall Fellows,” Elleithee wrote in an email to The Hoya. “We hope Hoyas feel the same.”

Over the semesterlong term, the fellows will engage the university community in weekly discussion sessions, hold office hours for students and contribute to the programming of GU Politics’ lectures, panels and events.

The fellows will also spearhead student strategy teams, in which a select group of students collaborate to research a problem endemic to the American political system and develop a solution over the course of the semester.

Elleithee said the forthcoming November presidential election will provide a unique perspective for the fall 2016 class of fellows.

“With the 2016 presidential election, we expect this group of Fellows to take Hoyas on a dive deeper into national politics and the issues that are front and center in November, like political polarization and race and politics,” Elleithee wrote. “We’re excited for these guys to come to campus and get to work.”

GU Politics Operations and Student Engagement Manager Hanna Hope said she is excited to begin working with them.

“It’s been so fun to see students waiting all summer to see who our Fall Fellows would be, and we’re thrilled at the response that we’re seeing to this group,” Hope wrote in an email to The Hoya. “I love seeing that the Georgetown community has already started interacting with our Fellows online, and we can’t wait to have them on campus soon, livening up our new offices.”

“Headlined by a former presidential candidate and a top presidential campaign adviser on board — I think this is the strongest GU Politics class of fellows yet,” Bennett said.