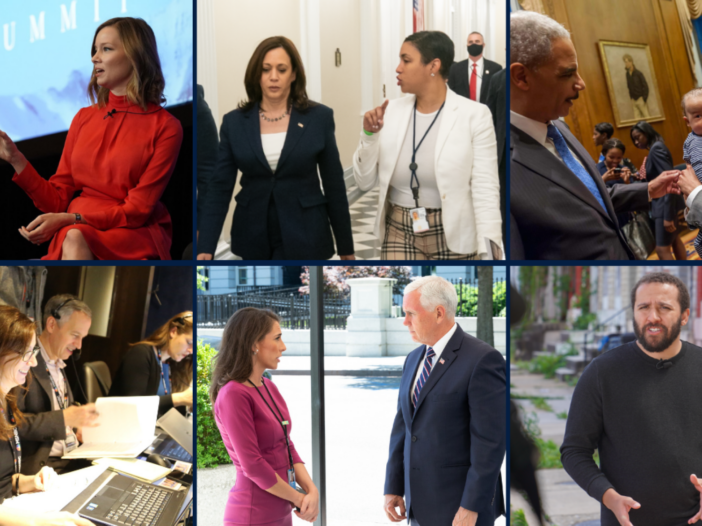 The Georgetown University Institute of Politics and Public Service (GU Politics) has announced its cohort of fellows for the spring 2022 semester, which includes Ashley Etienne, former communications director to Vice President Kamala Harris, and other prominent political figures and journalists.

Since first launching its fellow program in 2015, GU Politics has brought up to six political figures from both sides of the aisle to campus each semester to host events and discussion groups with students. GU Politics will host a virtual Fellows Fest Jan. 20 to give students the opportunity to meet and hear from this new cohort.

The new class of fellows will work with students to promote the greater good, according to GU Politics Executive Director Mo Elleithee (SFS ’94).

“The Spring 2022 Fellows bring decades of experience in politics, government and journalism to the Hilltop, and come from different places on the ideological spectrum,” Elleithee wrote in a statement to The Hoya. “But while each Fellow has their own theme and area of focus, they share a common goal to work with students to advance the common good, bolster democratic institutions, and lead with a service-oriented passion for a purpose larger than oneself.”

Etienne served as a senior adviser to Biden, Obama and Harris. Etienne also served as communications director to Speaker of the House Nancy Pelosi (D-Calif), the first person of color and the first woman to hold the position. In that role, she helped to lead legal, communications and legislative strategy during the first impeachment and trial of former President Trump. Etienne will host a discussion group titled “A Seat at the Table: The Politics of Power.”

Griffin previously served as press secretary to Vice President Mike Pence and as press secretary to the U.S. Department of Defense. She is the first person to have served as top spokesperson for the President, Vice President and Secretary of Defence under one administration. Griffin will host a discussion group titled “The Future of America’s Democracy in the Midst of the ‘MAGA’ Movement.”

Lowery won his Pulitzer Prize in 2016 for his work at The Washington Post on a project tracking and investigating fatal police shootings. He now serves as a correspondent for 60 Minutes+, the streaming version of CBS’s 60 Minutes program. Much of Lowery’s work deals with law enforcement, racial justice and the law, and he is also the author of best-seller “They Can’t Kill Us All: Ferguson, Baltimore and a New Era in America’s Racial Justice Movement.” Lowery will host a discussion section titled “The Media in This Movement.”

Linzer began her journalism career in 1994 reporting for the Associated Press from Jerusalem on Middle East peace efforts and regional military conflicts. In 1999 she became the chief editor of the Associated Press foreign desk and in 2004 she became a national security correspondent for the Washington Post, where she reported on the CIA and diplomacy. In 2008 she joined ProPublicia as their first senior investigative reporter, uncovering racial bias underlying in presidential pardons. Linzer served as the managing editor for politics at NBC News and MSNBC from 2015 to 2021. She will host a discussion section titled “Trust in Government.”

Anderson co-founded Echelon Insights, an opinion research and analytics firm. Her work as a pollster mainly focuses young voters. Anderson also hosts the radio show “The Trendline with Kristen Soltis Anderson” on SiriusXM and is the author of “The Selfie Vote: Where Millennials Are Leading America (And How Republicans Can Keep Up).” Anderson will host a discussion section titled “Polling, Polarization, and the Value of Listening in American Politics.”

In addition to being a CNN Legal Analyst and a regular guest host on SiriusXM, Williams has appeared on NPR and has written for The Washington Post, CNN.com, USA Today and The Hill. He also served as judiciary counsel for Senate Majority Leader Charles Schumer (D-NY). Williams’ discussion section is titled, “Politics and the Law Square Off. Which Wins?”

The fellows will promote the shared goal of strengthening democracy in their respective discussion sections, according to a statement to The Hoya from GU Politics.

“While they each have their own unique focus, the Spring 2022 Fellows share a common goal of strengthening democracy,” the statement read.

Discussion sections will begin the week of Jan. 31.