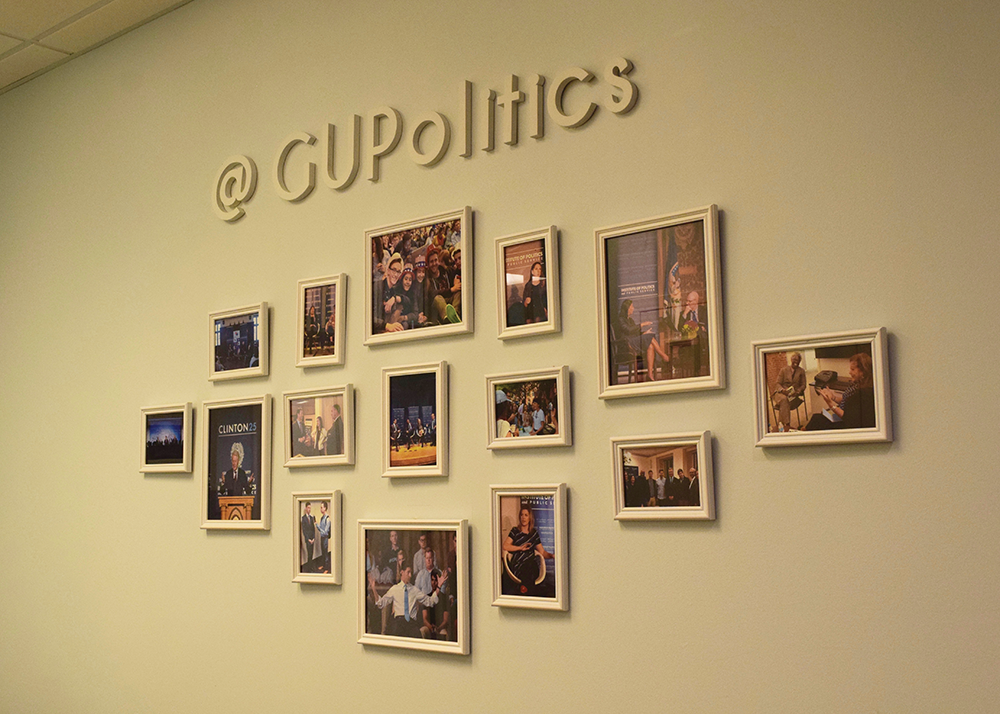 The Georgetown Institute of Politics and Public Service welcomed five new fellows to campus for the spring of 2019, including two political advisers, a journalist, a former congresswoman and a political strategist.

Spring 2019 is the eighth semester for which GU Politics has selected fellows to engage with students on campus through weekly, not-for-credit discussion groups on current issues in politics ranging from the Democrats winning the majority in the U.S. House of Representative in 2018 to the nuances of political advocacy through media. The fellows discussed their desire to hear student perspectives in their politics, public service and journalism seminars this semester in a Jan. 18 interview with The Hoya.

Why did you decide to be GU Politics Fellows, and what specifically about Georgetown students, the values or the mission specifically prompted that decision?

Aniskoff: One of the reasons is that I have seen so many people in the last two years going into public service to make money, and so many scandals, and so much craziness that I want to give a firm reminder to people that going into public service is one of the best careers you can have to do something great for your country, to have a really sort of rigorous and interesting career that is part of government.

And then very selfishly, I just wanted to do something that would be fun and give me hope that we’re going to recover soon. So that’s my very overly honest answer.

Ros-Lehtinen: I was a member of Congress forever. But I love to exchange views with young people, and they’re probably more liberal than I am, maybe they’re not, I can’t wait to find out. We’re going to be discussing different topics on foreign affairs, big cases like the Cuba sanctions and the Iran nuclear deal, so what drew me to Georgetown was it’s such an intellectual powerhouse and I’ve had many colleagues who have been fellows here and they had a wonderful experience, it was very productive and entertaining also.

Capehart: I wanted to be a fellow because I wanted to learn from you. You meaning the students here at Georgetown, and particularly this generation because as I’ve seen from the Parkland kids on, you guys are going to be the ones who are going to lead this country to a better place. By sitting in the discussion groups and listening to you and learning from you, you are going to help me do my job better.

Sena: My job was to win back the House of Representatives for the Democrats. Along the way, I had the opportunity to come and do, with my Republican colleague, an evening debate here and the students just blew me away. The smarts and the energy and the feedback was so amazing. As I left that night, I turned to somebody who was in GU Politics and I said, whatever I have to do, I would love to come back.

Ferrier: Truth be told, one of the primary reasons that I am here is because I was rejected from Georgetown undergrad. So this is my comeback, I’m proud to be a Hoya now even though I obviously did not graduate from here. Secondly, I participated in some of the group discussions for two previous fellows and had such a good time. The back and forth, I learned as much from the students as I hope they learned from me. I think it’s fair to say that campus is fairly more left-leaning than right-leaning, and I love busting people’s preconceptions about Republicans, so that’ll be fun too.

What do you hope us students will take away from the program?

Ros-Lehtinen: I think we all will learn a lot from the students. And I think that we’ll find out, I hope, in my class, that there’s so many diverse views of foreign policy and who calls the shots; sometimes it’s just the perception it’s not really the powers that the Constitution gives to the branches, but the way that the President or someone in Congress projects that they’re the ones in charge.

How did you decide what to focus on in your discussion topics? And do you think that today’s political situation influenced that choice?

Aniskoff: For me, it was a huge part of my decision. Today’s political influence on me makes me want to make sure every citizen is engaged, whether it be on a very small spare-time level, or their full-time job in the future. I think everyone should be civically engaged and take ownership of our country, and make sure that they are a part of the process and that they get to exercise the rights that we luckily have here.

Ferrier: I’ve worked for I don’t even know how long, and rough-and-tumble political communications from the Republican side. There is just more and more and more tools and more and more and more noise. How do you prioritize, how are you going to figure out what you’re going to listen to? So sort of looking at how you break that down, who listens to what and how is it effective or not, in terms of actually having an agenda and things you want to get done.

There’s a lot of animosity towards the news and journalists today. How has this affected or changed your job at all?

Capehart: That is actually what is driving a lot of my discussion group, is to demystify what it is to be a journalist in general and an opinion writer in particular. The number one discussion group is going to be: What is news? And the second one is going to be the difference between news and opinion. The lines have been blurred, obviously, but there is a difference. What makes our jobs harder now is because people don’t read, they don’t listen, they’re popping off with half or no information, and that makes our jobs very hard.