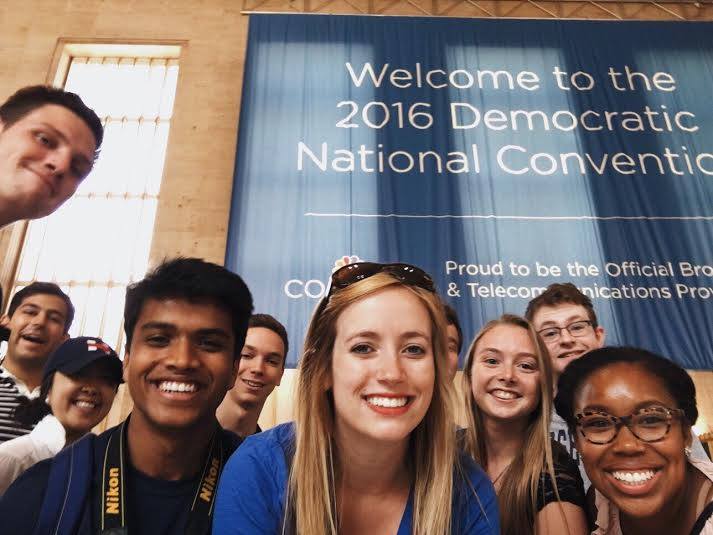 During two dramatic weeks rocked by political feuds, an email-hacking scandal and two competing visions of the future of America, Georgetown students were invited to witness the action of the 2016 Republican and Democratic National Conventions through Georgetown Institute of Politics and Public Service’s Convention Ambassadors program.

The 10 students who attended the RNC in Cleveland, Ohio, from July 18 to July 21, and another 10 who attended the DNC in Philadelphia, Penn., the following week, witnessed candidates Donald Trump and Hillary Clinton officially secure the nominations from the Republican Party and Democratic Party, respectively, for president of the United States.

Selected in May, the convention ambassadors chronicled their experiences interning for Politico, the RNC and the DNC through GU Politics’ Facebook, Snapchat and Twitter accounts. Their duties included scheduling different interviews, providing directions to attendees, distributing transcripts of speeches and registering attendees.

Executive Director of the Georgetown Institute of Politics and Public Service Mo Elleithee (SFS ’94), who previously served as the DNC’s communications director, said the Convention Ambassadors program was created in order to give students an experience they had never had before.

“GU Politics is all about providing access,” Elleithee wrote in an email to The Hoya. “So we wanted to offer Georgetown students a once-in-a-lifetime opportunity to go to the 2016 Democratic and Republican conventions for a behind-the-scenes look at the party nomination process.”

Richie Mullaney (COL ’18) is no stranger to the RNC – he attended the Republican presidential nominating convention in 2008 as a spectator and again in 2012 as part former Governor of Massachusetts Mitt Romney’s campaign for the presidency. But he said something about the 2016 RNC in Cleveland was different.

“This is my third convention and I would say it was the most interesting,” Mullaney said. “Very historic, no doubt about it, and pretty chaotic. I would say the best word to describe the convention was unconventional.”

Later, Sen. Ted Cruz (R-Texas) stopped short of endorsing Trump during his presentation, urging the audience to “vote their conscience.” All throughout the convention, cries of “lock her up” – referring to lingering doubts about the legality of Clinton’s use of a private email server during her tenure as secretary of state – emanated from the arena.

“The experience was amazing, and I would do it again in a heartbeat,” Barrera said. “But, as a Democrat at the Republican National Convention, I was pretty shocked at a lot of what I saw.”

The DNC was not without its share of contention either. Rep. Debbie Wasserman Schultz (D-Fla.) was ousted as DNC chairwoman a day before the convention after anti-secrecy organization WikiLeaks released a trove of emails allegedly demonstrating partiality toward the Clinton campaign during the primary season.

Convention Ambassador Santana Jackson (COL ’17) recalls Michelle Obama’s address as her favorite moment for its unification of a fractured party amid the DNC drama.

“It did a good job of uniting everyone,” Jackson said. “Because, that’s when the WikiLeaks [controversy] came out, and the Bernie supporters were protesting throughout that first day. But, after that first speech, the party rallied together.”

Jackson appreciated the fact that the program allowed convention ambassadors to watch major speeches in person, which gave them a feel of the crowd’s energy. She also enjoyed meeting political figures, such as former Maryland Governor and presidential candidate Martin O’Malley and White House Communications Director Jen Psaki.

“It was really awesome being there in person,” Jackson said. “All the speeches were great, but my favorite part was the energy in the arena from people that were attending.”

“I think Ted Cruz’s speech really made everyone excited,” Mullaney said. “We were on our feet and the whole convention hall was erupting in cheers and boos. I think it was fascinating and a break from what we normally see in today’s era where you see really choreographed conventions.”

The entire spectacle of the conventions was painstakingly documented by the team of convention ambassadors on assorted social media platforms. Don Soffer (COL ’18), who edited a recap video of the group’s experience at the DNC every night, noted that it was a fun but tiring exercise.

“There was a really big social team on Snapchat, Facebook and Twitter documenting the whole thing. I think the [GU] Politics institute did a good job of documenting the whole trip,” Soffer said. “[But], the days started to blend together, because you’d be up at 6 a.m. after coming back from the arena at 1 a.m.”

Elleithee noted that the hectic schedule of convention ambassadors was intentional; the trip was mostly meant as an educational experience for the ambassadors in order to give them a taste of what working in politics would be like.

“We wanted to show them all kinds of things,” Elleithee wrote. “The stamina and speed it takes to work in politics, the energy and enthusiasm that delegates and convention goers have for their candidate and party, and most of all, the fact that at the end of the day, we’re all doing this for the same reason because we want to serve, and to make it better if we can.”

Student ambassadors were selected in part based upon their political engagement and background. They were also expected to have familiarity and comfort using social media to document their experiences.

They application opened May 8 and ambassadors were notified of their positions later that month.

Elleithee was pleased with how the convention ambassadors performed in their roles. He noted that while he was disappointed that he could not have taken everyone who applied, the 20 students who attended represented Georgetown well.

“We wanted to bring a smart, strong and diverse set of Hoyas to Cleveland and Philly and we definitely did,” Elleithee wrote. “They knocked it out of the park.”