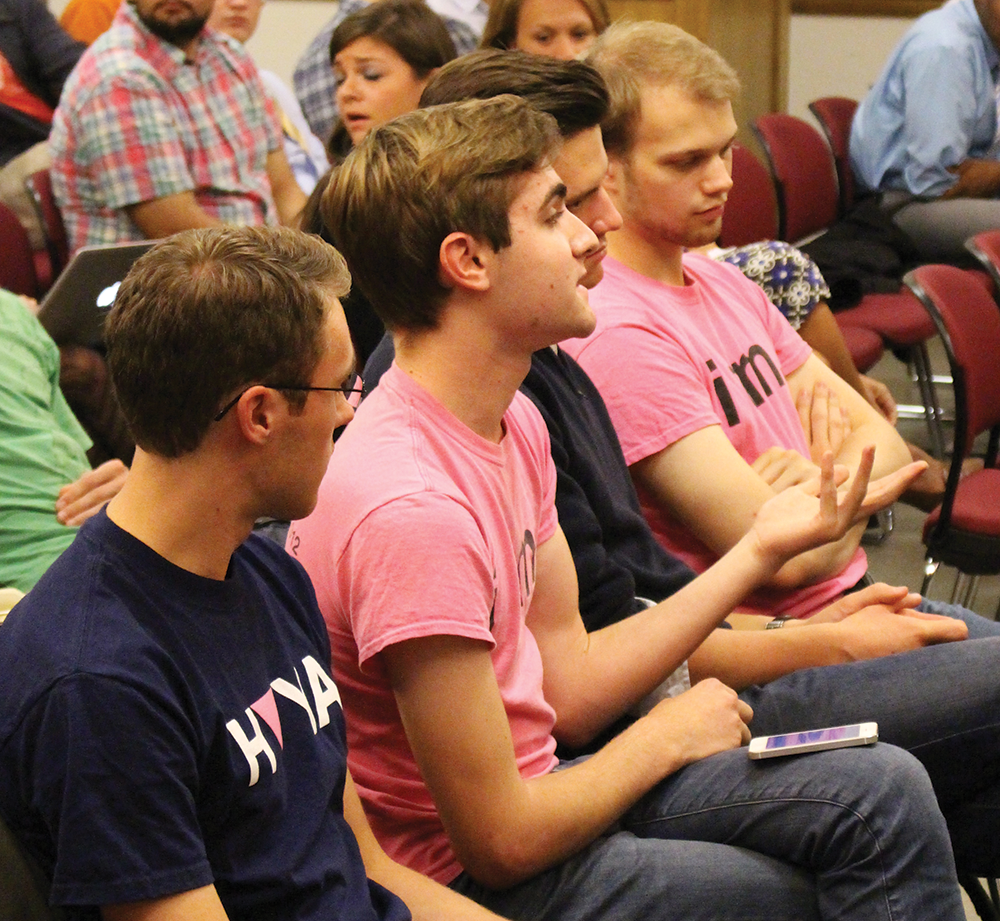 Love Saxa has brought speakers to campus to discuss traditional marriage and faith since spring 2012. But this year, the group has drawn criticism from GU Pride, whose members allege that the Love Saxa’s invitations have increasingly been extended to more homophobic guests.

“Last year, being on the board, I don’t remember them bringing anyone anti-gay to campus,” GU Pride President Thomas Lloyd (SFS ’15) said. “It seems like their programming has taken a turn for the more homophobic.”

Craig Cassey (COL ’15), an openly gay member of the Advisory Neighborhood Committee, first brought the Anderson event to Pride’s attention after last week’s protest, which was not directly affiliated with GU Pride.

“We see a conflict there. We figured it is important to have our community represented at these events,” Cassey said. “Both speakers have been viewed as homophobic. It seems evident that Love Saxa doesn’t agree with our belief of marriage equality being essential for America.”

GU Pride members also raised questions about the timing of these events during Coming Out Week and OUTober.

“I was surprised they would plan an event on marriage during the week Pride celebrates the LBGTQ identity,” Lloyd said. “That necessitated a formal response. I can’t speak to whether they’re doing it deliberately, but I think it’s poor planning — OUTober has been an established event before this was conceived.”

Love Saxa member Emile Doak (COL ’14) said that Tuesday happened to be the only time Anderson was available and the date was unrelated to OUTober.

“The fact that they’re close together was not our plan,” Doak said. “I actually feel bad about [the timing].”

During his lecture, Anderson discussed his rationale for opposing gay marriage.

“There are people on both sides of the debate who haven’t considered the other side,” Anderson said. “The argument I make about marriage isn’t based on religion or theology. It doesn’t discuss morality, and it doesn’t discuss gay marriage or homosexuality.”

Anderson said that marriage should not be “redefined” because it is a fundamental social institution.

“The love-making act is the life-giving act,” he said. “The marital relationship has an intrinsic connection to the creating and raising of new human beings.”

The presentation was followed by a spirited but courteous question-and-answer session during which Anderson debated with GU Pride members. Lloyd was among those who challenged Anderson’s logic.

“A queer person could remain celibate until marriage, then engage in a conjugal act that’s going to produce as many children as an infertile couple,” Lloyd said. “That act unites them because they’re the only people who are engaging in that act together, and then that makes them more committed to each other, more emotionally connected to each other, making them better parents, more able to raise their children in an effective way.”

“Conjugal union is by definition something only a man and a woman can participate in,” Anderson said in response.

Boyden said speakers like these were foundational to create a more open discussion on campus.

“Love Saxa is definitely a proponent of a traditional vision of love, the view of one man and one woman. We hold that out proudly. Talks like this can be the starting point for a conversation about the subject,” Boyden said.

Cassey and Lloyd were both optimistic about the attention the events drew to Pride and LGBTQ issues.

“It’s certainly energizing queer students and allies alike,” Cassey said. “Pride isn’t opposed to taking a part and being present at these events.”

Despite calling the events homophobic, Lloyd said he appreciated the dialogue that rose from them.

“In a way, I’m glad these students are bringing them to campus,” Lloyd said. “When people hold events like these that involve openly hostile speakers … it gives us the opportunity to engage people who wouldn’t normally be engaged by us.”

“I think that we can all agree that Ryan [Anderson] made us think, and thinking is good,” he said. “I want to congratulate the maturity level at which this discussion took place on everyone’s part.”