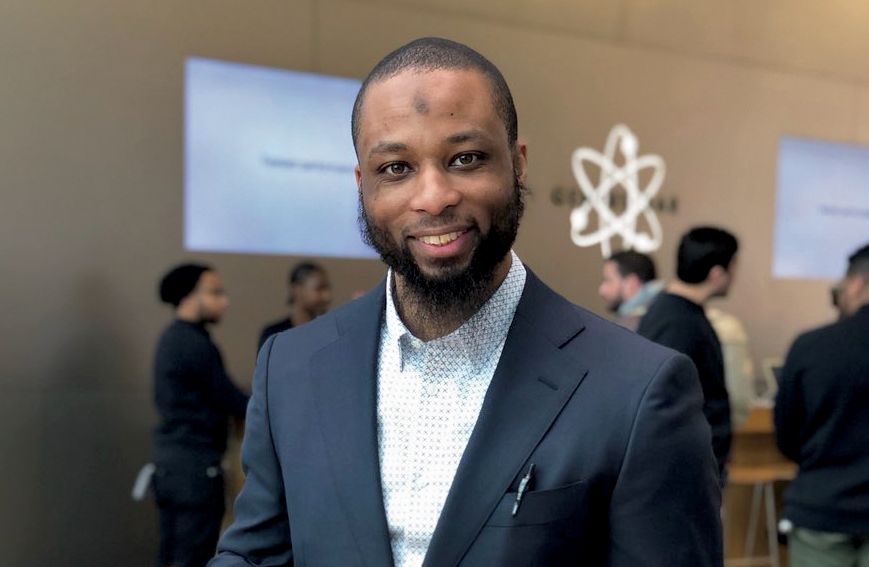 Halim Flowers, a Washington, D.C. local who took Georgetown University courses through the Georgetown Prison Scholars Program while incarcerated, was released from D.C. Jail on March 21 after serving 22 years.

Flowers began serving his 40-years-to-life sentence at 17 years old after being convicted as an accessory to murder. He was released early because of the D.C. Council’s Incarceration Reduction Amendment Act, which allows a judge to commute the sentences of individuals convicted as juveniles depending on their demonstration of personal growth while incarcerated.

Flowers started taking courses offered by Georgetown faculty through the Prison Scholars Program, which launched in January 2018, last fall. He enrolled in government and philosophy classes and attended a weekly lecture series with guest speakers from across the humanities and social sciences.

“Those relationships with the students and the professors, they are beneficial because they exposed me to resources I am not aware of, and I exposed them to resources they were not aware of, so it’s a cross-cultural exchange that benefits both parties,” Flowers said in an interview with The Hoya.

The Prison Scholars Program is a partnership between Georgetown’s Prisons and Justice Initiative, which studies and seeks to combat the issue of mass incarceration, and the D.C. Department of Corrections. Each semester in the program includes two credit-bearing courses, in addition to seven non-credit courses and a weekly lecture series for 50 men and women currently residing at the jail, according to the program’s website.

Marc Howard, a Georgetown professor and the founding director of Georgetown’s Prisons and Justice Initiative, knows Flowers personally from the time he spent as a student in Howard’s class on the process of democratization. Howard posted on his Facebook wall welcoming Flowers home and documenting his release from jail March 21.

Flowers’ diligence and dedication towards his studies in the Scholars Program influenced the judiciary’s decision to release him from prison, according to Howard.

“My understanding is that his participation in the Scholars Program played an important role in persuading Halim’s judge that he had embarked on a rehabilitation and transformation process that made him ready to re-enter society safely and productively,” Howard wrote in an email to The Hoya.

Programs like The Prison Scholars Program have had demonstrable success at reducing re-incarceration rates, according to research conducted by nonprofits. Incarcerated individuals who participated in correctional education were 43 percent less likely to return to prison within three years than those who did not, according to a 2013 study from the RAND Corporation, a policy analysis think tank.

Howard commended Flowers for his ongoing dedication to his education.

“I would say that he is one of the best students I’ve ever had in the classroom in my 16 years of teaching at Georgetown,” Howard wrote. “Over the time we’ve spent together in the D.C. Jail, and now outside, I can say that I have tremendous respect for Halim. He is a person of tremendous intelligence, dedication and integrity.”

Howard also taught a spring 2018 seminar titled “Prison Reform Project,” which led to the Sept. 19 exoneration of Valentino Dixon, who spent 26 years in prison after being found guilty of murder.

Through Howard’s classes, Georgetown undergraduates and inmates have the opportunity to meet and interact with one another. Incarcerated students participating in the program gain both an education and a chance for reflection through their interactions with other students, according to Hashwinder Singh (COL ’20), a Georgetown student who met Flowers through Howard’s classes at the D.C. Jail.

“The empowerment each of these men and women get from their Georgetown education cannot be overstated. Halim is simply the most visible benefactor of that,” Singh wrote. “Halim will be the first to testify how valuable his educational experience was in opening up his mind and worldview and one needs to look no further than the literature that he has written and constantly engages with.”

While incarcerated, Flowers wrote and published 11 books, including memoirs from his time in prison, self-help books and poetry. His most recent book, #Unchainable, was published in June 2018 and is his fourth collection of poetry. Work from #Unchainable was featured in a multimedia installation that exhibited the experience of life in a prison cell at the inaugural By the People arts and dialogue festival in D.C. last June.

Flowers said writing while in jail was a way for him to spread his story and connect with individuals outside the prison.

“You are going to need people to help you get out and to help you when you get out, so if all of my conversations are just confined to the people that I’m inside of the institution with, then my effectiveness to be able to build a chain to get me out of prison, and to assist me when I get out is confined and limited,” Flowers said. “So by me writing books, and putting the books online and promoting them on social media, I’m connecting with a global audience.”

At the time of his release last week, Flowers is concurrently enrolled in two additional credit-bearing courses, English Literature and the History of African American Political Thought, as part of the Scholars Program, according to Howard. Flowers will be completing these courses outside of the jail, Howard said.