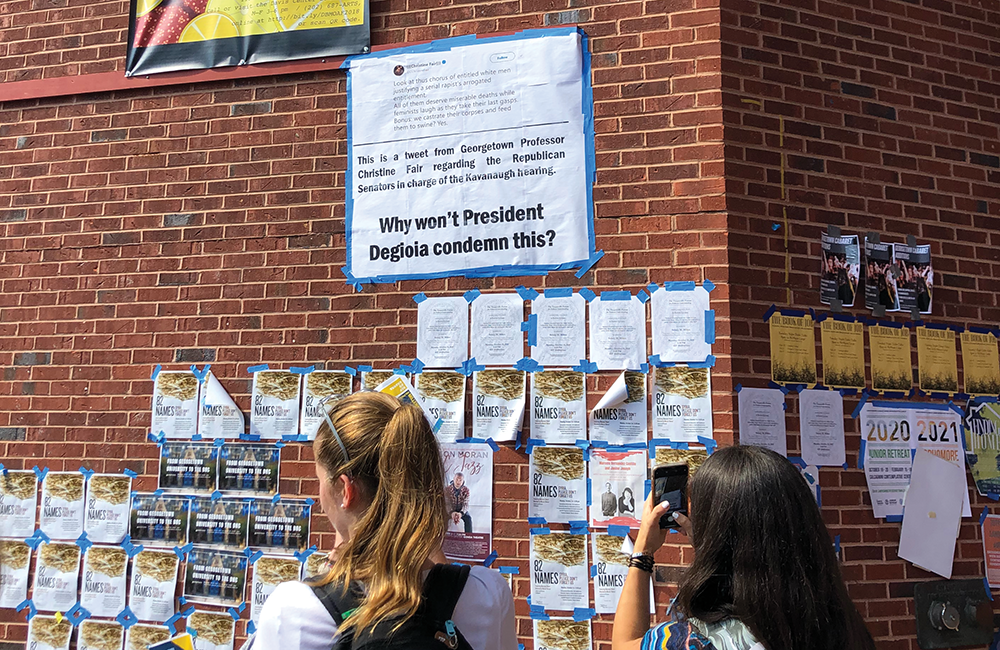 Professor Christine Fair is on immediate research leave after a tweet on her personal Twitter account calling for violence against Republican senators received backlash last week, according to an email sent by Dean of the School of Foreign Service Joel Hellman on Oct. 5.

Fair’s tweet was a response to the Sept. 27 testimony in front of the Senate Judiciary Committee by then-Supreme Court nominee Brett Kavanaugh — who is now a confirmed justice — in which he denied sexually assaulting Christine Blasey Ford in high school.

“Look at [this] chorus of entitled white men justifying a serial rapist’s arrogated entitlement. All of them deserve miserable deaths while feminists laugh as they take their last gasps,” Fair wrote in her tweet. “Bonus: we castrate their corpses and feed them to swine? Yes.”

Hellman wrote in an email to the SFS that the decision to begin Fair’s research leave immediately, rather than wait until the previously scheduled date, was reached mutually between Fair and university administrators. The planned date for the beginning of her research was not included in the email.

“To prevent further disruption to [Fair’s] students and out of an abundance of caution for the security of our community, we have mutually agreed for Professor Fair to go on research leave effective immediately,” Hellman wrote in the email.

Some of the complaints about Fair received by the university were threatening, prompting an institutional response, Hellman wrote.

“It’s become clear that incivility begets incivility. While we have received many legitimate concerns from members of our community and beyond regarding the social media posts Professor Fair has made in her personal capacity, many other complaints registered have been provocative and threatening,” Hellman wrote. “Our Threat Assessment Team and Georgetown University Police Department (GUPD) have taken preventive steps to secure our campus, conduct safety assessments, and continue to monitor the situation.”

Brahmachari Vrajvihari Sharan, the university director for Hindu life, will take over Fair’s “Intermediate Hindi” classes, according to Dan Byman, vice dean of the SFS.

Fair’s tweet received backlash from alumni, students and conservative-leaning media. A poster was hung early in the morning on Oct. 4 in Red Square, displaying Fair’s tweet, followed by an add-on reading: “Why won’t President Degioia [sic] condemn this?”

President John J. DeGioia released a statement Oct. 4 condemning Fair’s use of violent imagery but defended school officials’ right to freedom of speech, in an email sent to the Georgetown community.

“We protect the right of our community members to exercise their freedom of expression. This does not mean the University endorses the content of their expression,” DeGioia wrote. “We can and do strongly condemn the use of violent imagery, profanity, and insensitive labeling of individuals based on gender, ethnicity or political affiliation in any form of discourse. Such expressions go against our values.”

Fair described the backlash as censorship intended to discipline her free speech as a woman in an interview with The Washington Post.

“It’s another way to discipline women’s bodies, by asking us to discipline our rage,” Fair said. “I cannot tell you the rage and hurt it feels as all of those men on that Judiciary Committee kicked sexual assault survivors in the gut.”