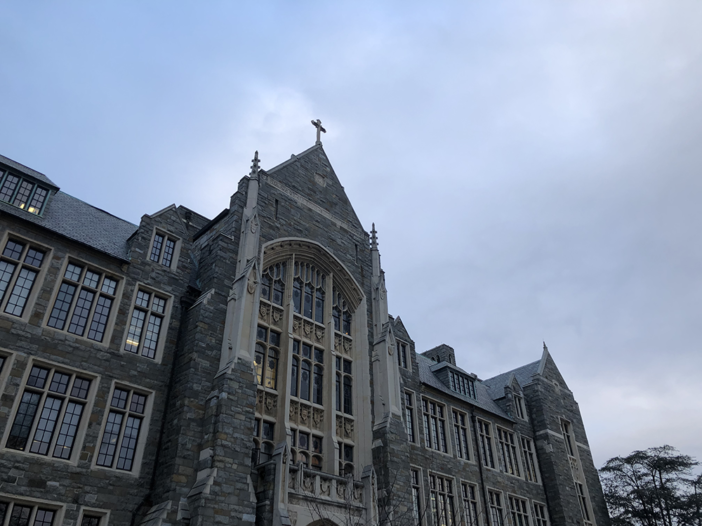 Some Georgetown University professors teaching classes about China are taking precautionary measures to protect students and faculty from possible security threats during online learning in the fall.

Some faculty worry lecture recordings and other technical vulnerabilities in Zoom may endanger students and instructors who criticize the Chinese government. Faculty who spoke with The Hoya are particularly concerned some sensitive course material may violate the broad and vague stipulations of the latest Chinese national security law. The law, enacted by the Chinese government June 30 in response to ongoing pro-democracy protests in Hong Kong, is an open-ended prohibition of secession, subversion, terrorism and collusion with foreign powers against the Chinese government.

James Millward, a professor of Chinese and Central Asian history, said because the crimes are vaguely defined, the scope of the new law’s impact on foreign nationals is still unclear.

“If you read the text of the National Security Law, it is very broad and virtually any US-taught class dealing with contemporary China will have material that the CCP could, if it wished, call subversive or separatist—which could have very severe consequences for a student found with such things on their laptop, or downloading a video of a class with such content from a Canvas or Panopto server,” Millward wrote in an email to The Hoya.

In the past, the Chinese Communist Party has taken punitive action against Chinese students who have voiced anti-regime opinions while studying abroad. In November 2019, a Chinese student studying at the University of Minnesota was sentenced to six months in prison in China for tweets he had posted while abroad.

Kristen Looney, an assistant professor of Asian studies and government who is teaching a “Politics of China” course this semester, said she adapted her syllabi to reflect the newfound risks that come from virtual learning.

“I think every faculty teaching courses on China should notify students of the risks, so I just put a section about online meeting policies on my syllabi,” Looney said in an interview with The Hoya.

Millward said he became alarmed about Georgetown using the Zoom video conferencing software for the upcoming virtual semester without properly educating faculty about the privacy issues that may arise from it. Millward and other Asian studies professors across the country penned a statement in July calling on universities to adopt safer online learning practices.

Millward said the habit of recording lectures has undermined efforts by Zoom and administrators to secure communications on the platform and protect users.

“The university administrations imagine, ‘Oh, we just record everything on Zoom and then send it to them or record everything on Zoom and it stays in the cloud on Canvas and then they can go download it whenever,’” Millward said in a follow-up interview with The Hoya. “The problem with that is that, although Zoom is now theoretically end-to-end encrypted, once it’s stored somewhere and then you’re downloading it as a file, that file’s on your computer. And it’s also no longer encrypted, and so then it becomes something that anybody can look at.”

Looney said because of the sensitive nature of her courses, she will ban any form of recording lectures and distributing course content outside of the class.

“All class meetings will be held synchronously (in real time), and students will log onto Zoom through the course Canvas website…no one (neither the students nor the professor) will record class meetings,” Looney’s syllabus reads. “No one will circulate course readings, handouts, notes, or other materials to anyone outside of the class.”

Looney acknowledged the difficulty of enforcing such a policy and added another provision that students who do not feel comfortable during the lecture can mute their video or change their name.

“It [is] an honor code violation if anyone records the meeting. The difficulty with that is, of course, I can’t enforce it. As the meeting host, I cannot record myself. I can tell students not to record, but I don’t know if somebody is sitting here with their phone recording or using some other device to record,” Looney said in an interview with The Hoya. “An additional step is if students would like to refrain from using the video function or refrain from using their real name, then they have that option.”

The dangers of online learning are not limited to faculty and students involved with classes about China, according to Millward. Students and faculty taking classes about other authoritarian countries may also be at risk.

Georgetown’s Chief Information Officer Judd Nicholson said the university has implemented a few policies to help protect students and faculty while learning online. The university is requiring students to sign up for Duo, a password authentication system, and has recommended methods to improve Zoom security.

Millward said the university has improved its virtual security measures by realizing there is a need for classes to be both convenient and secure, but it needs to take more public steps to protect and warn the community about the potential dangers of virtual learning.

“We need to maximize accessibility where necessary by recording Zoom classes and other things and sending them out or making them available in the cloud to students, wherever they are,” Millward said. “But they’re afraid to mention that, you know, there is a danger — hard to quantify — but there is a risk to our students in authoritarian countries. They don’t want to put that down.”

Looney does worry some of the warnings about security risks may scare students away or cause them to self-censor. As a result, she decided to omit some of the more extreme risks from her syllabi.

“I don’t want it to have a chilling effect on the class and really compromise academic freedom or free speech, and I do think that the probability of somebody being targeted by the Chinese government is low,” Looney said. “But the problem is we have no idea how these new policies are going to be enforced because they were just implemented. So, I have to err on the side of caution and try to protect everybody’s safety, while at the same time maintaining academic freedom, and it’s a really difficult balance.”