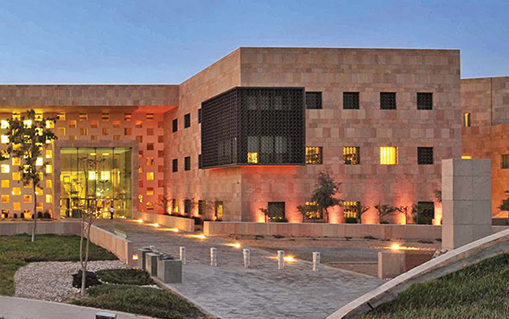 Georgetown University’s campus in Doha, Qatar, was named one of the 10 U.S. colleges with the most restrictive censorship by the Foundation for Individual Rights in Education on Tuesday.

FIRE, a nonprofit dedicated to protecting the civil rights of university students and faculty, selects schools based on the severity of censorship and university attempts to rectify the suppression, according to Sarah McLaughlin, senior program officer for legal and public advocacy at FIRE.

GU-Q’s placement on the annual list was a result of the cancellation of an Oct. 9 religious discussion planned by the GU-Q Debating Union as part of a series called “Pardon the Interruption,” according to a FIRE news release.

At the debate, two professors, alongside student participants, were set to consider the question of whether major religions should portray God as a woman, according to GU-Q professor of world literature and one of the planned debaters, Ian Almond.

GU-Q tweeted Oct. 8 that the debate had been cancelled because of the organizers’ failure to obtain university authorization.

The GU-Q Office of Communications referred to safety risks associated with the event, according to an Oct. 10 statement to The Daily Q, the student newspaper of Northwestern University’s Qatar campus.

“GU-Q is committed to the free and open exchange of ideas, while encouraging civil dialogue that respects the laws of Qatar,” the statement reads.

FIRE interpreted GU-Q’s statement as a reference to a Qatari blasphemy law that prohibits speech insulting or offensive to Islam. FIRE perceived GU-Q’s cancellation of the event as censorship of a sensitive religious topic and placed the university on its top-10 list, according to the press release.

“In the case of Georgetown’s Qatar campus, we found it uniquely disturbing that a university committed to free expression would seemingly censor speech on the basis that it could be perceived as ‘blasphemous,’” McLaughlin wrote.

Qatar, which has notable laws restricting free speech, ranks No. 125 among 180 countries in terms of freedom of press, according to Reporters Without Borders, an organization that advocates for reporters worldwide.

Still, GU-Q is committed to freedom of expression and debate in accordance with Georgetown’s Policy on Speech and Expression, a GU-Q spokesperson wrote in a statement to The Hoya.

“Faculty members and student groups with access to university benefits may host events on campus that are in accordance with Qatari law,” the statement reads.

Despite these national limitations, FIRE faults GU-Q for its restrictions on student speech, according to McLaughlin.

“FIRE recognizes that American universities operating branches in other countries may be subject to speech restrictions that would violate the First Amendment in the United States,” McLaughlin wrote. “But in those cases, universities should not make promises to students that they cannot deliver.”

The debate’s poster, featuring a reimagining of the famous Michelangelo painting “Creation of Adam” with Ariana Grande in the role of God, sparked backlash after it surfaced on Twitter, including a trending Arabic hashtag, roughly translatable as #GeorgetownInsultsGod, accusing Georgetown of blasphemy.

GU-Q Dean for Student Affairs Brendan Hill received death threats in response to the poster, according to Almond. FIRE was not aware of any death threats made to the dean and based its assessment of the cancelled debate on GU-Q’s public statements, according to McLaughlin.

The university opened a dialogue with students about their right to free expression after its public statements about the cancellation, according to Fatima Farooqui (SFS-Q ’21), a former member of the Debating Union.

“I really do believe that it was for the safety and security of students. I don’t think it was a violation of our free speech,” Farooqui wrote in an email to The Hoya. “The Student Life staff was readily available for the next two days to talk to students and reassure them that these things are things we can talk about, especially within Georgetown.”

FIRE weighed this incident too heavily in deciding to place GU-Q on its list, Almond said.

“It’s a very liberal and open campus, and in fact one of the reasons why students here at Georgetown-Qatar were angry that the debate was cancelled is precisely because they perceive it as a very different place in comparison to other campuses,” Almond said. “It is perceived as a place where, as an academic and as a student, you are more or less allowed to do or say what you want.”

GU-Q’s campus is the result of Education City, an initiative by the Qatar Foundation for Education, Science and Community Development created by Sheikh Hamad bin Khalifa during his time as emir. The Education City project incentivizes U.S. universities to build programs in Doha. Other U.S. colleges in Education City include Northwestern University, Carnegie Mellon University and Texas A&M University.

FIRE considers Georgetown’s main campus a “red light” institution, meaning it has at least one policy that restricts free expression, for making incivility and disrespectful behavior a punishable offense in the code of student conduct.

The university was also ranked on FIRE’s 2015 top-10 list for not recognizing the pro-abortion rights group H*yas for Choice; FIRE accused Georgetown of violating its own free speech policy by refusing to recognize HFC because of the group’s stance on abortion. Georgetown appeared on FIRE’s 2017 list after the Georgetown University Law Center prevented students from campaigning or engaging in partisan political speech on campus.

Georgetown adopted a new free speech policy in June 2017 modelled after that of the University of Chicago, which prohibits suppression of offensive speech. This step was important but insufficient to raise Georgetown’s overall rating, according to FIRE.

The GU-Q administration and Student Government Association launched Red Square, a replica of the main campus’s forum for tabling, flyering and other forms of public discourse, on Jan. 15. While the project had been in progress before the October event, the cancelled debate accelerated the process of creating Red Square, as the administration wanted to ensure students had a platform for free expression, according to Farooqui.

“The Red Square at the Qatar campus is a combined effort by the administration and the SGA here to encourage people to talk more freely about things that they feel like they cannot talk about,” Farooqui wrote. “It is a great step towards progress. So far, it has been pretty successful.”