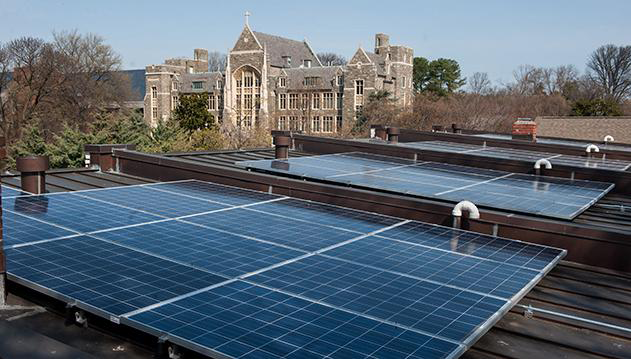 Georgetown University ranks first among the nation’s colleges and universities in renewable electricity use, according to an Aug. 19 report published by the national environmental advocacy group Environment America. The report compares renewable electricity usage data from 127 U.S. colleges and universities that have joined the Environmental Protection Agency’s Green Power Partnership, a federal program that encourages the use of renewable energy sources. Georgetown tops the list, generating and purchasing 1.3 times as much electricity from renewable sources as it consumes, according to the report. Overall, the university utilizes more than 159 million kilowatt-hours of green power annually, ranking seventh in green power usage among universities in the EPA GPP. Rankings among universities in the Environment America report are based on data collected from the EPA GPP, according to Emma Searson, the 100% Renewable Campaign director at Environment America. Previously, the EPA GPP named Georgetown as an EPA Green Power Partner of the Year in 2013. For the Georgetown Renewable Energy and Environmental Network, a student environmental advocacy organization on campus, this ranking is the culmination of proactive student action on environmental sustainability issues, according to Victoria Boatwright (COL ’22), the president of GREEN. Boatwright hopes the ranking will highlight the importance of environmental advocacy and empower further student activism on environmental issues. “The rating from EA is a big step for Georgetown because it will help put us on the map as a university committed to sustainability,” she wrote in an email to The Hoya. “While our ranking as first for renewables comes from our renewable energy credits (RECs) that were purchased before my time at Georgetown, I would say that much of Georgetown’s progress in terms of sustainability has been in response to student advocacy.” Between 2006 and 2014, the university cut its carbon footprint by 71% by obtaining RECs, tradable certificates that prove 1 megawatt-hour of electricity was produced using renewable sources. Georgetown met its goal to cut greenhouse gas emissions in half by 2020 six years early by purchasing enough RECs to cover 100% of the university’s electricity production, according to Audrey Stewart, director of the Office of Sustainability. “Georgetown is committed to reducing our greenhouse gas footprint, which includes supporting the robust deployment of renewable energy and ensuring that our campuses run on clean energy sources,” Stewart wrote in an email to The Hoya. Though Georgetown has demonstrated a commitment to renewable energy by purchasing RECs, these credits are transferable and do not require carbon emissions produced by Georgetown itself to be reduced, according to Boatwright. “I would like to see an investment in our current, on-campus renewable energy projects as well as an investment in grid alternatives (for example, purchasing power from a utility company other than Pepco, our current energy provider that is majority generated by fossil fuels) so that more of our on-campus energy consumption would be derived from clean energy sources, like renewables,” she wrote. This article was updated Sept. 3 at 9:20 p.m. to clarify language surrounding the ranking and fix the definition of Renewable Energy Credits.