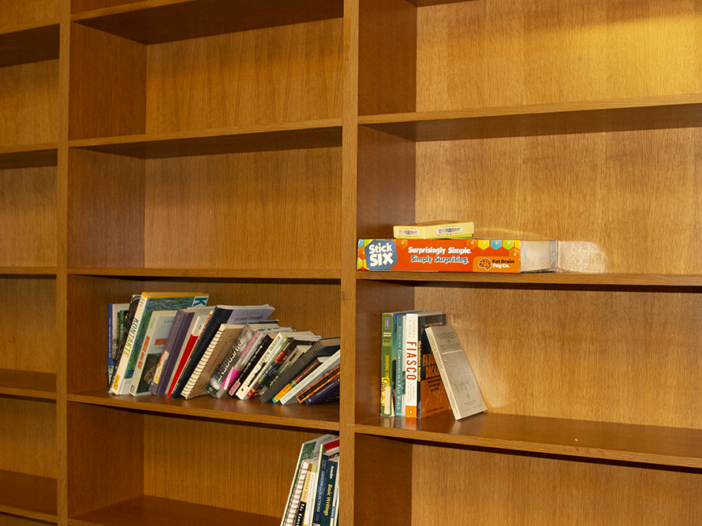 This article describes racist and sexist content. Please refer to the end of the article for on- and off-campus resources.

Shelves of books in the Reynolds and McCarthy libraries featuring racist and sexist content were removed by university officials last week after students reported the books to Georgetown University Residential Living staff.

News of the books’ removal was first reported in an article written by Jacob Adams (SFS ’23) and Justin Drewer (COL ’23), editors-in-chief of The Georgetown Review, a student news organization that bills itself as an independent journal of politics and world affairs, according to its website. Student members of “The Hilltop Show,” an online political comedy group, first noticed the content of the books after a group meeting in the McCarthy library Jan. 22.

While walking out of a meeting Jan. 22, one student noticed a book entitled “Cherokee” on a bookshelf, Alexandra Bowman (COL ’22), a cartoonist for The Georgetown Review and member of “The Hilltop Show,” said. The cover of the book, a 1958 novel published by Don Tracy, features an illustration of a young Native American woman in distress with blood on her clothes. The group then decided to investigate the books remaining on the shelves, according to Bowman.

“Upon looking further at the collection of books in the library, we noticed other serialized books, most published in the mid-20th century, with similar pornographic, racially derogatory themes,” Bowman wrote in an email to The Hoya. “Ultimately, the removal of the books was what we expected to come as a result of our inquiry.”

The content of many of the other books included pornographic references and sexist depictions of women, as well as racist themes and slurs, according to Bowman.

“While some were simply raucous crime noir murder mysteries representative of the literary and cultural time in which they were written, other books included extremely problematic and damaging elements, including the glamorization of rape, including that of underage girls,” Bowman wrote. “Completely naked women of all races were frequently featured on these books’ covers. Further, many books fetishized young nonwhite women.”

Bowman then decided to help research the story, later published by The Georgetown Review. (Full disclosure: Bowman previously served as a Hoya Staff Writer and cartoonist for The Hoya.)

A separate staff member of “The Hilltop Show” found similarly offensive books in the library in Reynolds Hall over the course of their investigation, according to Bowman.

Both libraries were created on the first floor of Reynolds and McCarthy in 2003 when the Southwest Quadrangle opened. The libraries began with a book donation and is donor-funded, according to a university spokesperson. There is no formal checkout or cataloging system in place at either library. Instead, students are allowed to borrow and leave books for others on a regular basis. The books had not been monitored, the university spokesperson wrote in an email to The Hoya.

The university led an investigation into the content of both libraries’ collections after receiving email inquiries from Bowman and the team of researchers, a university spokesperson wrote.

“When we received messages in the past few weeks regarding the nature of the books that had been left, members of our Residential Life team investigated the bookshelves and discovered books had been left with titles, topics, and images that raised concerns for students and staff. The decision was made to remove these books from the public space,” the spokesperson wrote.

The books with explicit content and offensive content were ultimately removed Jan. 31, leaving only various textbooks and board games on the shelves, according to Bowman.

While removing the books may be considered a form of censorship, the university needed to provide the historical context behind the books, Adams and Drewer wrote in The Georgetown Review article.

“To be clear, The Georgetown Review does not support censorship in any form, since history is only useful if we learn from it, and learn from it all, unrestricted,” the article said. “However, when providing access to historical texts—written during a different time in American history, during times of different moral and social standards—providing context is equally critical to the learning experience.”

Though the decision to remove the books was ultimately the correct decision, the university’s process regarding the removal could have been more transparent, according to Bowman.